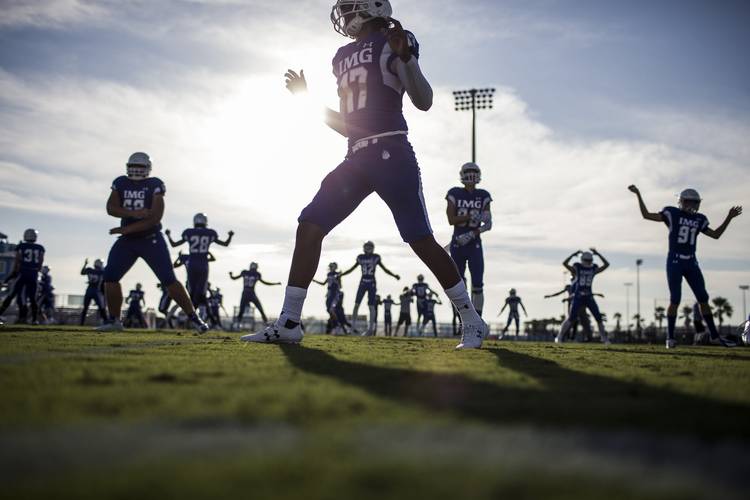 IMG Academy players warm up before a game in Bradenton, Fla., Sept. 11, 2015. The academy, a private, for-profit sports-oriented boarding school on a onetime tomato farm, is the latest experiment in prep football and could produce, depending on one's view, bountiful harvests of talent, or a blight of professionalism. (Edward Linsmier/The New York Times)

Tom Herman made one thing abundantly clear this week. He loves him some Texas high school football coaches.

Hey, Herman didn’t learn at the right hand of God’s gift to high school coaches for nothing. When it comes to recruiting, Tom Herman is the second coming of Mack Brown. He’s following the blueprint to perfection.

Leave no stone unturned. Contact your local recruit every hour on the hour. Social-media the heck out of your commitments. Tweet how Austin is the equivalent of the Garden of Eden but with better BBQ.

Oh, and make sure the coaches know you love them.

Which is why the Longhorns’ new coach on Tuesday clarified some rather generic remarks he’d made before a thousand or so at the Texas High School Coaches Association’s annual convention.

Initially, Herman said that he didn’t understand why any high school players in our state would pack their bags and head to the IMG Academy in Bradenton, Fla., which takes in elite players at $72,500 a year but does offer financial aid. Never mind that he already has a commitment from one.

“I get nervous that one of those things is going to take off here in the state of Texas,” Herman said, according to the Houston Chronicle.

Yeah, sure, over the dead bodies of about 1,400 high school head coaches in Texas. For them, IMG Academy is fighting words.

Many of them generally see the IMG Academy as corporate raiders. The boarding school for future NFL draftees come to your state, plunder your athletic talent — most of which Texas coaches have already developed — and take them back to Florida all in the name of college scholarships, high NFL drafts and untold riches. Texas prep coaches aren’t buying it.

They see it as another threat to their mission of helping kids mature and grow in their own communities and play sports in front of family and friends. But the IMG Academy, which has fielded an elite team since 2013 and produced 87 FBS scholarship players including Texas A&M quarterback Kellen Mond, isn’t for everyone. It’s grown so much, it now fields two varsity teams with full schedules and just hired former running back Carnell Williams on its staff.

IMG schedules games with teams from California, Arizona, Utah, Alabama and Virginia, and an IMG spokesman said the school has had no problems scheduling games and is already working on the 2018 schedule. But are Texas coaches lining up to play?

“No, absolutely not. There’s no upside,” said Westwood’s Anthony Wood, who’s about to start his 24th season of high school coaching. “Nobody’s really wanting to play them anymore. Our kids in Texas are going to be coached probably better than they would be at IMG Academy. And they’re hand-picking the ones that have already been developed. They need to thank the high school coaches they stole them from.”

And it’s not a matter of kids choosing IMG because that’s the only way some will be discovered by college recruiters.

“They found Jeremy Kerley here at Hutto in 3A, and he’s playing in the NFL,” former Hutto head coach Lee Penland said of the wide receiver who played for TCU. “He was only 5-7, 5-8 and they found him. And he came back and told our kids the most fun he ever had in football was in high school.”

Baylor’s Matt Rhule offered his opinion and said he would never step foot on the IMG Academy campus. So Herman issued a clarification.

Of course, the rub is one of Herman’s commitments for Texas’ 2018 class is four-star linebacker Ayodele Adeoye, a 6-foot, 231-pound prospect from St. Louis who just happens to be attending IMG Academy. He’s, uh, pretty good. Like the No. 100 ranked player in the nation and fourth-best middle linebacker prospect, according to 247 Sports. And that’s why Herman came back and said there’s value in private and prep schools as well as public schools.

So was Herman talking out of both sides of his mouth when he first cast a stone at IMG Academy at the same time he was reaping the benefits of the program?

Maybe a little, but I don’t blame him for taking an IMG player like Adeoye. So have Oklahoma, Alabama, Clemson, Ohio State, Georgia and others. Seventeen IMG players have played for Big Ten teams, 15 for ACC, 13 for SEC but only two in the Big 12, including a former cornerback who left Kansas for Fresno State and a one-time preferred walk-on running back at Baylor.

Herman’s entire job is to accumulate as much talent as he can and win games for Texas. But it might be risky if he took 10 IMG players because it wouldn’t sit well with in-state high school coaches. His predecessor, Charlie Strong, took six Florida high school prospects in his first class — none from IMG — and all fizzled, save wide receiver John Burt. Some Texas high school coaches seethed, creating what some saw as a rift between Strong and the state’s coaches.

I’ve always thought the Longhorns should cherry-pick talent from beyond Texas’ borders. If not, Ricky Williams would have played elsewhere. So would Jordan Hicks and Bryant Westbrook and Major Applewhite. Recruiting doesn’t have to be an either/or situation.

“The college coach’s job is to recruit the best players for his football needs,” Wood said. “If Tom feels he needs to go to the Samoa Islands, he should because his ultimate job is to win football games. It wouldn’t bother me a single bit.

“Now I do believe if I had a linebacker just as good as the one at IMG, I believe he’d take mine over the one at IMG. But I don’t blame him.”

That said, Rhule said on this week’s “On Second Thought” podcast that he “will never set foot on the IMG Academy” because he thinks that condones IMG’s mission and disrespects the high school coaches of those states where IMG finds players.

“I’m not trying to be holier than thou,” Rhule said. “But I have to support Texas high school coaches first. I’m not saying I’m right, but that’s how I feel.”

Which is also why Herman wanted to make it clear he totally embraces Texas high school football. In his clarification, he said there was “great value in playing high school sports in your community” but added there are other opportunities “like charter or private schools or IMG Academy where athletes can grow and flourish.”

And Rhule was splitting hairs because when asked what he’d do if a five-star quarterback from IMG told him he wanted to be a Baylor Bear, he said he’d consider doing a home visit.

Personally, I’m astonished any parent would send their precious Johnny or Joanie to one of these high school factories many zip codes away and forfeit their time with their sons and daughters and let someone else raise them for a year or two.

Now there are exceptions like those kids who live in unstable situations with a bad home life and perhaps a worse crowd they might be running with. Those might do well in such an environment like IMG Academy.

And Herman’s welcome to pluck one or two of them. Many more than that, and he may have problems.

Florida’s IMG Academy started its football program in 2013. Since then, 20 IMG players have landed among the national top 100 overall recruit listings per 247Sports’ composite rankings: