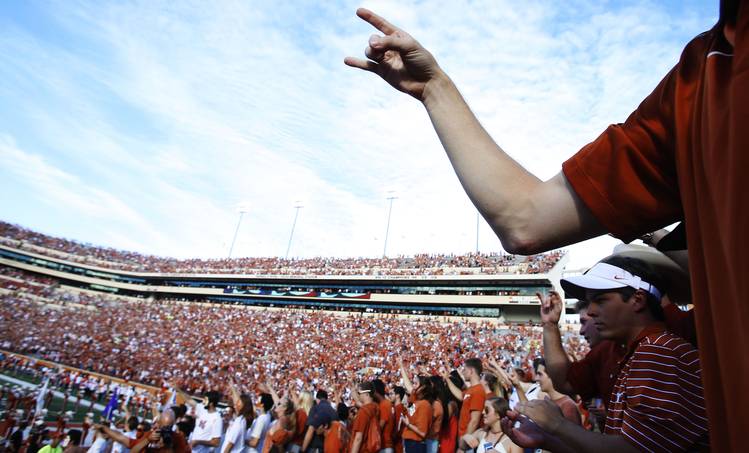 On Saturday afternoon, the Aggies lived it.

“We threw our last knockout blow, and it missed.”

There was nothing technical about Texas‘ knockout. Running backs Darren Lewis and Wilson and quarterback Bucky Richardson were involved in a toe-to-toe bashing with the Longhorns’ defense Saturday. They did bodily harm to one another, but Texas was still standing – a 28-27 victor – at game’s end.

“They’re big up front. Well, they’re big everywhere, ” said Richardson, who ran for 109 yards and a touchdown on a 32-yard run. “We felt we could run the ball on them, and we did. They made some great plays but, hey, they’ve got scholarship players. You can’t win every battle, and you can’t make every block.”

A&M just wishes it had made the one that might have kept Texas middle linebacker Brian Jones out of the Aggies’ backfield on their two-point conversion try with 3 minutes, 46 seconds to play.

Jones gave the Longhorns penetration for pretty much the first time all day, forcing Richardson deeper on the option play. By the time Lewis got the ball on a pitch, he was on the 10-yard line. Cornerback Mark Berry stopped Lewis at about the 5.

A&M had been going to the left and the weak side for most of its option plays all game – with great success – but lined up in a three-tight end set and ran to the right, the strong side.

“It was a great tackle by Mark Berry, ” Lewis said. “I was trying to make him miss, but they were waiting on it.”

Coach R.C. Slocum had called a timeout to deliberate, but there was no doubt he was going for two points.

“We didn’t come over here to tie the ballgame, ” Slocum said. “A tie might have been devastating to them, but it wouldn’t have been anything close to a win for us. We never considered it. I’d do it this way 100 out of 100 times.”

A&M’s bruising running game may have come up 5 yards short, but it still produced 326 yards, the most Texas has allowed all year. Lewis and Wilson ran better on the field than team mate Anthony Williams did at the mouth.

Between the three Aggies runners, the team churned out 23 plays in which it ran for 5 yards or more. A&M lost yardage on just six snaps.

Lewis accounted for 150 yards and three touchdowns on runs of 17, 12 and 31 yards and finished as the fifth leading rusher in NCAA history with 5,012 career yards. He did so despite a throbbing shoulder bruise that he suffered midway through the second quarter.

“I was in pain the whole game, but if I wanted to play, I had to stay in and grit my teeth, ” Lewis said. “I just blocked it out.”

The pain, that is. His teammate, Wilson, blocked everything else out. Behind his clearing blocks – twice he drove Texas free safety Stanley Richard out of the picture and once nailed linebacker Anthony Curl – Lewis was sprung for three of his 45 career touchdowns. That’s the fourth most in Southwest Conference history.

Richard and Curl were full of Bull, but Wilson freed them of much of the blame.

“They’d have only one guy to cover the pitch back (Lewis), ” Wilson said. “I’d hunt the guy up who had him. He’d have his eyes on Darren and never see me coming.”

Texas is just glad to see Lewis leaving. In four years, the Aggies senior carried 84 times for 466 yards and four touchdowns against the Longhorns.

Slocum is just sorry to see Lewis leave without at least one special piece of hardware. But Lewis by and large dropped out of the Heisman race after he was ejected from the Louisiana State game in the second quarter for throwing an elbow in a sideline altercation.

“I think Darren should have gotten stronger consideration than he has, ” Slocum said. “I was disappointed he wasn’t one of the five selected to go to New York (for the Heisman show). Darren didn’t get the credit he deserves.”

He almost always got the yards, though. Lewis, for his part, expressed no bitterness, no regrets. In fact, he and the Aggies applauded Texas for its victory and 10-1 season.

“Texas played a great game, ” said Lewis, who even hugged one of the Cash twins after the game.

Why, even the outspoken Williams had a kind thing or two to say about the Longhorns.

“They took it to us and deserved to win, ” Williams said.