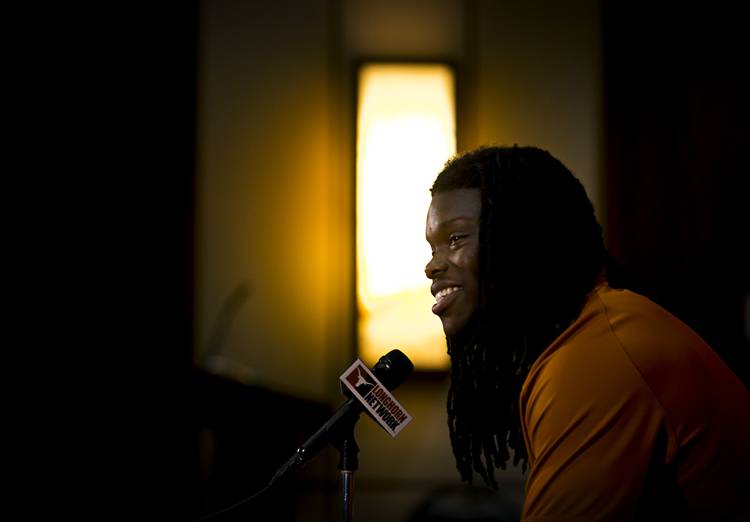 We got our first glimpse of the former face of the Texas football program after Wednesday’s practice.

It’s a familiar and friendly face.

Malik Jefferson, the most prominent recruit of Charlie Strong’s three seasons at Texas, appeared before a media throng and was his usual cheerful, positive self. He’s the kind of representative of a football program you’d want.

He’s smart. He’s nice. He’s upbeat (although slightly beaten down the last two years). He’s a social activist, but not in a Colin Kaepernick kind of way that puts off some people. He’s built like a 240-pound middle linebacker should be.

He was honest and forthcoming without belaboring the point or making himself the focus. He was unfailingly polite. He addressed the stories of his meaningful, in-depth conversation with new coach Tom Herman and said they “now know where each of us is coming from.”

When I asked him if he felt his name on the Butkus and Nagurski award watch lists was deserved, he thoughtfully said, “I feel like I can be. I want to show I’m that type of player.”

It’s time. After two seasons of flashes but little consistency, Jefferson figures to play a prominent role on Todd Orlando’s defense. He needs to be, both for Texas and himself.

FROM THE ARCHIVES (Dec. 3, 1991): KELSO: Big Steve would light a fire under the lollygagging Horns