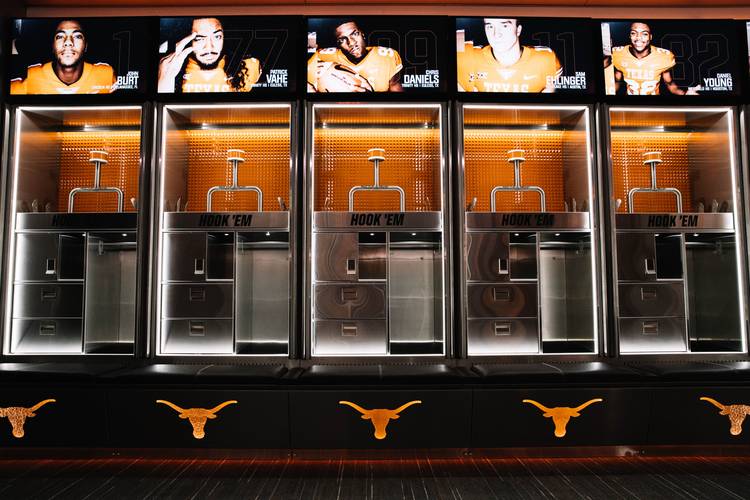 The stars of Texas' revamped locker room? The lockers, of course. The new ones cost about $8,700 each and are made of stainless steel. (TEXAS ATHLETICS)

At 5-foot-8 and maybe 120 pounds after a second breakfast taco, he tried his hand at cornerback and wide receiver until he just didn’t think he measured up. So he turned to soccer instead.

But that doesn’t mean he hasn’t had a huge impact on the game.

In fact, if the University of Texas lands a five-star defensive end or the next great thing at running back in the next decade, Allen could well be the reason why.

Or at least his glitzy, new-fangled lockers in the Longhorns dressing room may be.

Surely you’ve heard by now about the pricey, glow-in-the-dark personal lockers with the television screens that go for somewhere in the neighborhood of $8,700 each. They’re so state of the art that Texas Tech’s Kliff Kingsbury at Big 12 media days said “for that much money, they should do your homework for you.” He may be right.

And you’ll likely hear much more them as college programs go full-throttle in this new-age arms race, furniture-style.

Does Allen consider it a new arms race?

“Yes, I do,” the friendly, 40-year-old former Marine sergeant said this week. “I see that. Each coach will say we need something a little bit better.”

“Because there is such a premium on winning, we all will continue to chase the next competitive edge,” Rhoades said. “As technology continues to advance, we are perpetually in a cyclical arms race.”

And that’s what’s driving Allen’s custom lockers business named Longhorn Lockers that he founded in 2006 with his father John, who had been building lockers forever, mostly of the metal variety for high schools.

What began as a get-their-foot-in-the-door job to update TCU’s lockers, almost at cost, has mushroomed into a thriving company of about 65 employees in Venus, Texas, just south of Mansfield that this year will do $12 million in the locker business.

In the years since, Allen has built customized lockers for a couple dozen college football programs, including 2016 national champion Clemson, 2015 champion Alabama, LSU, Oklahoma, Stanford, Pittsburgh and Washington State. The Crimson Tide lockers were the first to use full stainless steel upper compartments and stainless steel exterior doors. Clemson’s lockers with a patented seat-back system and a helmet dryer were designed as “thrones” because the school just won a title.

Allen’s gotten to be so big-time that he got Jerry Jones’ business with the Dallas Cowboys and just this week agreed on a deal with the Baltimore Ravens.

As if that’s not enough, he’s gravitated into the basketball world, doing work for Kentucky, Alabama and SMU and is redoing the Cooley Pavilion lockers for Texas’ basketball program.

Yeah, you could say the arms race has begun because this is all about recruiting on the college level.

And no one gets that more than Herman. And he wanted something a little bit better.

“For the longest time, I wasn’t sure what he meant,” Allen said. “Did he want the lights in front of the door, behind it, inside it? It was a major feat.”

Some 1,200 man-hours later with his brain trust of 10 employees that includes four engineers, Allen had his perfect prototype and now has a patent on an operable lit locker-room door, one of 16 patents for his company.

And what’s not to like. Texas’ 126 lockers are the first of their kind in the entirety of their features. Like Alabama’s, they’re stainless steel, a big improvement over oak and mahogany because they offer an anti-bacteria feature and even “take out the stink of the locker room.” Their unique ventilation system dries out a player’s helmet and his shoulder pads and anything else that needs drying. They have a gear tray that slides out and custom glove hooks with Longhorn logos lasered in. They have a lock box with USB outlets, a graphic name plate for each player and, oh yeah, a 43-inch television monitor.

Oh, and it’s a place to store your clothes, too.

And it has rear-lighted pocket doors, of course.

College football’s newest gadget of sorts could revolutionize the sport. Where schools once measured the width and breadth of their stature in terms of weight room square inches and number of football seats in the stadium, now they’ll turn their sights to locker rooms and how best to impress 18-year-old kids.

Size matters. And now customizing does, too, because 70 percent of the $10 million Moncrief-Neuhaus renovation was devoted to the locker room.

“It opened our eyes,” Texas defensive end Malcolm Roach said after seeing the lockers for the first time Wednesday night. “If I was still a recruit, it’d open my eyes.”

Heck, Oklahoma was so entranced by Allen’s work, the Sooners even signed up for his services, never mind the Longhorn Lockers name. Joe Castiglione, OU’s forward-thinking athletic director, loved the product but reminded Allen, “There’s no way I’m paying out an invoice made out to Longhorn Lockers.”

The ever-resourceful Allen sent a bill to Norman to be paid in full to American Independence Manufacturing, the actual brand that accompanies the Longhorn Lockers sales side of a company with an estimated value of $138 million.

Allen never went to the University of Texas but said he’s always rooted for the Longhorns. They were his team.

He attended a community college in Dallas for a bit, thought briefly about becoming an architect but tired of school and dropped out. He took a job in the drafting department of a local company that manufactured lockers, and now he heads up a firm that is helping shape the future of college athletics.

Interestingly enough, he doesn’t even bother with warranties. Oh, he will if the buyer insists, but he doesn’t really see the need for them since his product is only as good as his word.

“We’ve got the Tommy Boy policy,” Allen cracked, citing the oft-repeated scene in the comedy movie by the same name. “A warranty is only as good as the person writing it. I think we ended up doing a 10-year warranty for UT, but I’ll give you whatever you want. It’s not a piece of paper. I’m not going to ruin a relationship over a broken door. I’m going to take care of you.”

It’s about building relationships as much as it is lockers for Allen. He developed a bond with Herman and his staff as he usually does with his clients. Most of them, anyway. There are exceptions. He did a job with Alabama but he never met Nick Saban.

He was invited to Clemson’s ribbon-cutting for its new lockers the week after the Tigers won their first national championship in 36 years, and his son Brock played basketball with Clemson wide receiver Hunter Renfrow, who caught the game-winning touchdown pass to beat Alabama.

“I have a whole drawer full of ideas,” Allen said. “I wake up in the middle of the night with a new idea. There is some really cool stuff coming down the pike. I just love doing this, interacting with the guys, seeing their reactions.”

He’s clearly building relationships as much as lockers.

So what’s next? What new option will Longhorn Lockers come up with next?

“Maybe one day on that,” Allen jokes. “But if we made an all-gold one, I’d have to watch my guys. There might be some missing pieces during construction.”

Bohls: Why is Tom Herman smiling? … and other musings from Friday’s practice