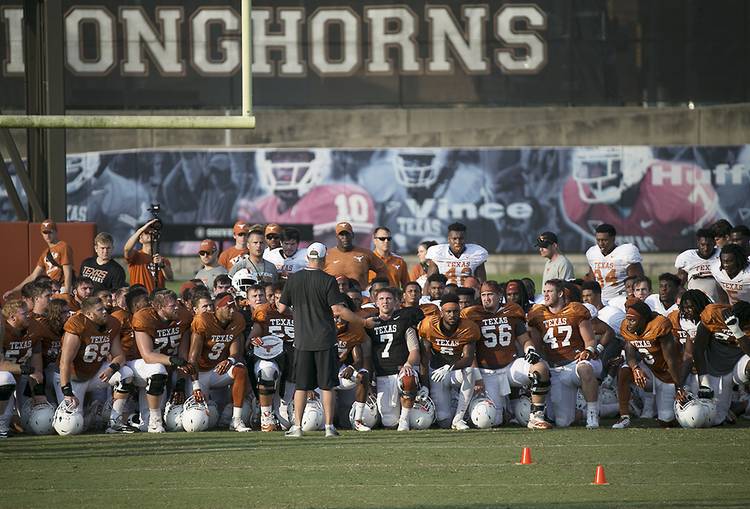 Tom Herman, what will you bring?

Well, after spring football, a long summer of conditioning and one week of Camp Herman, toughness is a popular term over on the Forty.

Herman actually let some excitement slip out after Saturday’s scrimmage and the guess here is he just can’t contain his absolute glee after watching two straights days of hitting in full pads. If he had a choice, the Texas Longhorns would dress in full regalia 24/7 and donate those wimpy shorts and t-shirts to a nice charity around the corner.

Hitting gets everyone excited, especially the man charged with getting the Longhorns back to national relevance.

Strong’s final preseason in Austin started with ping pong marathon and excitement surrounding the competitive gene of freshman QB Shane Buechele. This summer has been about swanky lockers, team-building exercises that reward winners with steak and losers with something less appetizing. Herman has already instilled a fear of losing and a fear of failure in his program. It remains to be seen if that fear equates to wins. The guess here is it will.

Of course, we’re at that time where all college football teams are undefeated and hope is gushing out of the pores of every coach and fan in the country. That said, Texas is in an elite program when it comes to drawing power and merchandising so Herman’s arrival has understandably brought with it some realistic expectations of bowl games and improved play after the worst three-year stretch in program history.

The first thing I’ve noticed is the players sure seem to be in better shape, both physically and mentally. This time last year, they were talking about avoiding Pat Moorer’s infamous Pit, but now we hear the new head coach reporting that team has lost a combined 500 pounds of body fat while adding 380 pounds of lean muscle under the direction of new strength and conditioning coach Yancy McKnight. On the surface, that sounds like a near-900-pound turnaround, and if we’re taking Herman at his word, it should equate to a much more well-conditioned group.

All-America offensive tackle Connor Williams, the bellcow up front, hasn’t been one to voice strong opinions in the past, but something he said after Friday’s first day in pads gave credence to Herman’s numbers.

“The strength and conditioning program kicked in today,” defensive back P.J. Locke said Friday, remarking that the sound of pads crashing against one another got him hyped.

The Horns were a couple of steps slow too often last season, especially on defense — you can’t un-ring the brutal bell that was the first half at Stillwater — and the concern still has to be depth up front. Herman made no secret of his desire to reduce the fat on this roster and he has apparently achieved that goal. The big’uns have a leaner look to them.

And about that mental shape that’s improved; Herman has implored his players to communicate more. When I asked Locke who was calling the defensive signals in the secondary, he said, “everybody.”

That’s what Herman wants. Noise and lots of it.

More than once over the last week, Herman mentioned the word “vocal” when discussing leadership, particularly when it comes to the most important position in team sports: quarterback.

Buechele has never been known for his decibel level, but he’s apparently registering better numbers in the preseason. Herman actually heard him scream after Saturday’s scrimmage, once in enjoyment and once in disapproval. Maybe the coach won’t need to show him those Tom Brady training tapes after all.

“It can have a dramatic effect on the way that we respond, whether it’s to success or to failure,” Herman said. “What you say and how you say it has an effect and so I think he’s really taken that to heart and done a good job of, and it’s not forced either, just expressing what he was feeling inside. Where before, I think he kind of kept it all to himself.”

Herman says he’s getting some good vocal leadership in this camp from Williams, tight end Andrew Beck, linebacker Naashon Hughes, Locke, guard Patrick Vahe and linebacker Malik Jefferson, who is the most intriguing study entering this season, given his dip in production and Q-rating his sophomore year.

The opener is still several hot practices away and Herman believes he is getting that buy-in he was hoping to see from all those meetings so many months ago.

Bohls: Fathom this — Texas will put the special back into special teams this year