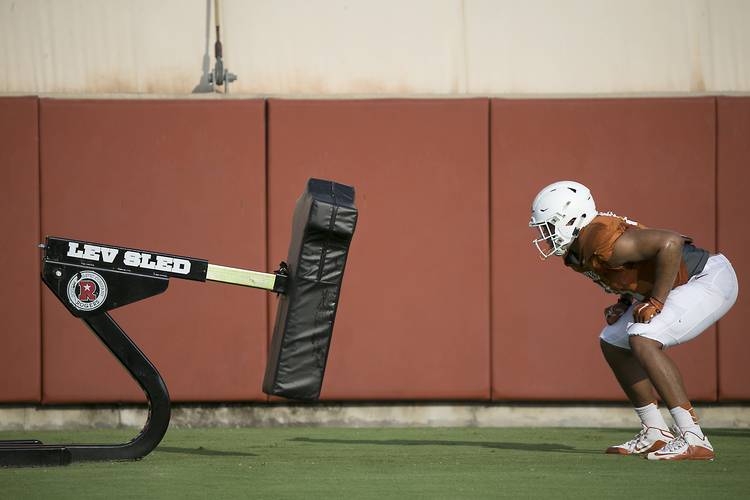 Texas tight end Reese Leatio, an incoming freshman, will be sitting out the first game due to a suspension, but some feel he will fit right in coach Herman's offense. The Texas football team dressed in full pads for the first time in training camp at Denius Fields Friday morning August 4, 2017. RALPH BARRERA/AMERICAN-STATESMAN

Corby Meekins has known Reese Leitao for a minute. Or two.

“I started recruiting Reese when I was at Houston,” the new Texas tight ends coach, who came here with Tom Herman’s Cougars staff, said of the Longhorn freshman. “So I’ve known Reese close to 20 months.”

At least he thought he knew him. That was before his arrest on a drug offense.

“He’s done everything I’ve expected him to,” Meekins said after Thursday’s morning practice.

Leitao, you might remember, had a rude arrival at Austin.

The 6-4 tight end recruit from Jenks, Okla., pled guilty to misdemeanor drug possession earlier this summer after being arrested for selling Xanax on his high school grounds. In a big offseason controversy, UT officials signed off on his scholarship and allowed him to join the program. Herman’s walking the dangerously fine line of offering second chances but also being a tough disciplinarian who doesn’t coddle his players.

Texas just happens to be desperate at the position since it hasn’t had a legitimate, play-making tight end since Jermichael Finley, who left after 2007 with two years of eligibility left. The Longhorns have been trying to find the next David Thomas ever since. Lawrence Sampleton, wherefore art thou?

That partially explains keeping Leitao on the roster, which is a risky move for Herman. Leitao definitely deserves a second chance although some have wondered if that should automatically include playing football. Leitao has been off-limits to the media since Texas camp opened on July 31.

RELATED- Bohls: Fathom this — Texas will put the special back into special teams this year

But Meekins promises the freshman is paying the price. And will continue to do so.

“I was completely shocked,” Meekins said, when asked his reaction when he heard Leitao had been arrested in late February. “But this is not going to define him.  He made a mistake, and he’s proving (he’s better than that) every day. But he has to prove it for the rest of his life or it’s just BS.”

He knows Leitao will have a target on his back the entire time he’ll be at Texas and could be subject to some ugly ridicule from fans in road games. The arrest will stick with him, but he has to show that’s not his real character.

“He’s got to be consistent,” Meekins said. “You can’t put an end points on it. There is no end point.”

After the first practice in full pads, Herman said of both freshmen Cade Brewer and Leitao, “They need to get stronger, but they certainly weren’t scared.”

Leitao definitely shouldn’t be scared of anything between the lines. But he has extra expectations his fellow tight ends do not.

Bohls: Fathom this — Texas will put the special back into special teams this year

Bohls: Perrin rewrites his legacy if he reignites Longhorns-Aggies rivalry