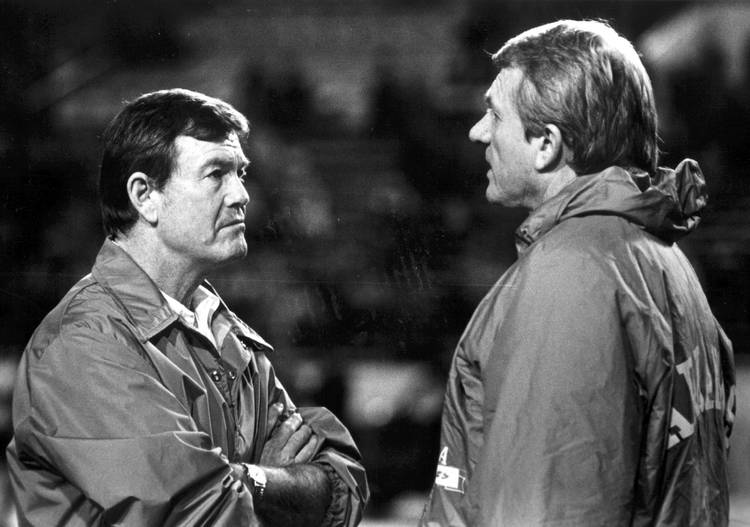 College football has lost a true icon in Frank Broyles, and Arkansas has lost a state treasure.

Frank Broyles was the Arkansas Razorbacks. He ruled them as a highly successful coach and powerful athletic director for more than five decades until his death on Monday.

I don’t think Broyles ever quite got the credit nationally for making Arkansas such a strong, relevant program but also an overall strong athletic department that has been spectacular in track and field, a Final Four operation in basketball and consistently successful in baseball.

Broyles wasn’t perfect. He couldn’t beat Texas or rarely did, winning just five times in 19 meetings and losing the two Big Shootouts I and II. But he made those contests memorable. If you’re coaching in something labeled the Game of the Century, you’re doing something right.

In truth, Arkansas cared too much about beating Texas. And that includes Broyles, who told me years later that he never watched film of his 15-14 loss to the No. 1-ranked Longhorns because it was too painful and that he didn’t revel in subsequent celebrations of that 1969 team that deserved praise not criticism. In that game, Darrell Royal earned his chops proving that when you pass, three things can happen but not all of them are bad. That wasn’t true for Broyles, who out-coached himself when he passed rather than settle for a game-clinching field goal.

In addition, his Razorbacks almost always followed Oklahoma on Texas’ schedule, and while the Longhorns’ emotional tank was often bordering on empty, the Hogs were too geeked up and too mistake-prone to get past Texas.

That trend, and the fact that Texas had better talent than Arkansas most times, led to one of the most lopsided, bitter rivalries in college football history. The Longhorns led the series 56-22, which is one reason Hogs fans went nuts with the team’s domination of Charlie Strong’s first UT team in the Texas Bowl three years ago. Until that frightful game when a Texas first down elicited mock applause, Rice had as many wins over Texas as Arkansas did.

But Broyles made Arkansas relevant and strong and a player on the national scene. He hired strong personalities like Ken Hatfield and Lou Holtz, Nolan Richardson and Eddie Sutton, legendary track coach John McDonnell and successful baseball coaches like Norm DeBriyn and Dave Van Horn. And he did Arkansas a solid by having the foresight to get it an invitation to the SEC, setting up his school’s financial future and leaving behind a dying Southwest Conference, a cataclysmic event that coupled with the exits of Texas A&M and Nebraska that has diluted the Big 12 and weakened Texas’ standing.

I loved covering Broyles during those Big Shootout days and visiting him regularly every April when he showed up annually at the Masters as an Augusta National member. Royal, his rival and close friend and golfing buddy, also once told me that Broyles had really ticked him off before that 15-14 Game of the Century, but he never told me what it was.

How unusual was it that two big-time head coaches of such hated rivals were close friends who rarely spoke football during their golfing forays. So smitten were they with the game that it wasn’t uncommon for them to play 90 holes in a day. A very long day. Can you image Urban Meyer and Jim Harbaugh vacationing together?

Sadly, many college players and any one younger may never have heard of Broyles, which is a shame because he was one of the giants in the business. He carried himself with such swagger and had a presence about him. He made Fayetteville a modern-day cradle of coaches with luminaries like Barry Switzer, Jimmy Johnson, Hayden Fry, Johnny Majors and Fred Akers.

I’ll never forget that December game in 1976 when he and Royal both retired on the same night when their two teams played at now Royal-Memorial Stadium. There was such a palpable buzz in the air that evening, and once they both coached their last, such a profound sadness that they were done.

Bohls: Perrin rewrites his legacy if he reignites Longhorns-Aggies rivalry

Bohls: Texas in the Top 20? Alabama not at No. 1? Defending my AP preseason Top 25 ballot