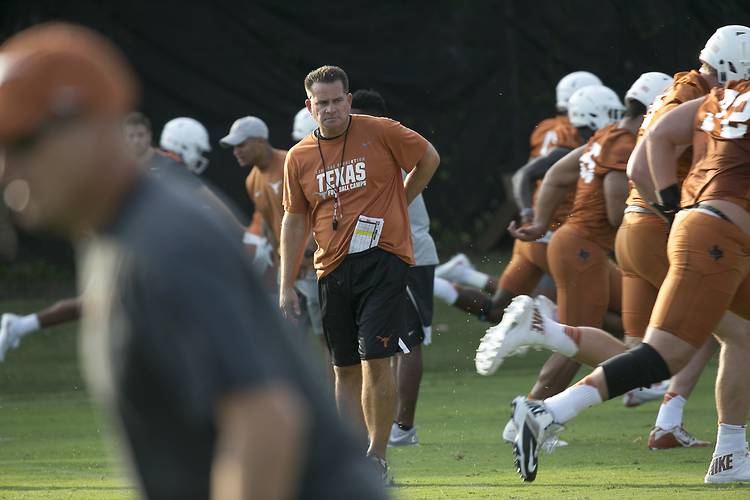 Tim Beck enjoys an explosive offensive play like any offensive coordinator, but it’s not the only part of football that gets him excited.

For one, he’s a real fan of a tough-minded consistency, which in most cases leads to long-term success.

Lightning strikes can turn games around, but a constant storm will add up to more wins. Texas’ new offensive coordinator has driven that point home to his players all summer. Consistent winning can come with total commitment and the right mindset, regardless of the challenges that crop up.

“We have to keep working the mental toughness,” Beck said. “It’s one thing to be physically tough and say ‘I can run into that wall or go hit a guy,’ but can you do it over and over an over again for four quarters when you’re hot and you’re tired and it’s raining and you’re in a hostile environment? Mentally you have to train yourself to be able to continue to do that. That’s still a process that we’re going through.”

Beck, 51, won’t fill up a reporter’s notebook with snappy quotes like Herman, whom he replaced as Ohio State’s offensive coordinator. But Herman believes Beck will help return great quarterbacking to Texas, something that’s been lacking in these parts for quite a while.

Part of embracing a challenge is overcoming a stumbling block from the past. They say you’re only as good as your last performance, and it goes without saying that Beck is more than ready for the Longhorns to take the field. He experienced success as a high school coach in Texas and as an assistant from places like Missouri State to Nebraska but found himself on the wrong side of history in his final game at Ohio State.

No Urban Meyer-coached team had ever been shut out, at least not until his 2016 Buckeyes suffered a 31-0 embarrassment at the hands of the eventual national champion Clemson Tigers in a college football playoff semifinal. The two-time Broyles Award finalist was never the primary play caller — Meyer and co-offensive coordinator Ed Warinner were a huge part of that process — but Beck took some heat after that Fiesta Bowl loss. A team that averaged 39.4 points per game managed only nine first downs. J.T. Barrett finished with 127 yards, two interceptions, zero touchdown passes and a 15.2 quarterback rating.

Three days after the school’s first shutout loss since 1920, Beck was Austin-bound. Herman had actually considered hiring him at Houston before Meyer hired him in 2015. He liked Beck’s knowledge of the game from the times they talked football on the recruiting trail, but didn’t pull the trigger until he got a player’s perspective on the coach. To that end, he put in phone calls to Ohio State quarterbacks J.T. Barrett and Cardale Jones for impromptu character references.

Their take? Tim Beck is the real deal.

As for his newest challenge, Beck will have more far stroke in play-calling than he did in Columbus though Herman, running backs coach Stan Drayton and others also will have their say.

“Tim Beck is a real guy,” Drayton said. “He’s a very unselfish guy. He designs our offense with every position in mind.”

And unlike Columbus, where he had to deal with two championship-caliber quarterbacks in Barrett and Jones, Beck enters this opener knowing that Shane Buechele is the obvious choice as the starter even though the sophomore is far from a finished product. He’s testing Buechele daily and grading how the quarterback translates the offense back to him.

The goal isn’t foreign. Move the chains, quickly and often.

Herman believes he has the right man for this job.

Beck won’t wow anyone with words, but words don’t matter as much these days.