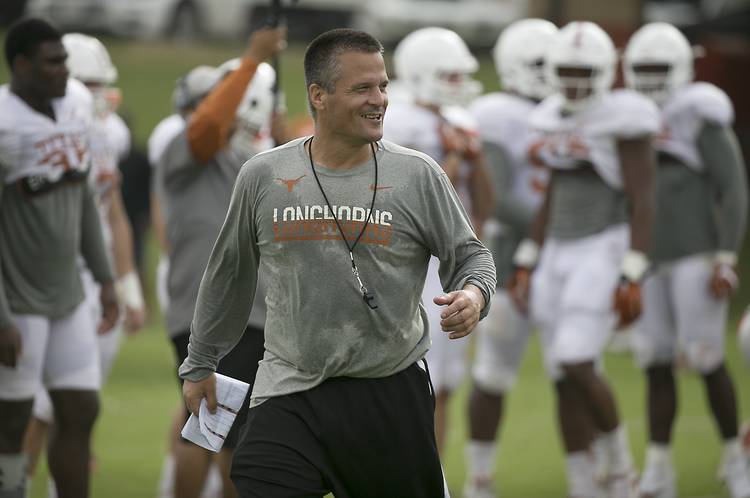 Plain and simple, Todd Orlando doesn’t like to talk about himself. At all.

Pry just a little into his life, growing up in the Squirrel Hill section of Pittsburgh as the youngest son of a plant manager at U.S. Steel and an ardent Steelers fan, and he’ll kiddingly ask you if “you’re working for the FBI or doing an article.”

Well, maybe he was kidding.

It’s not that Texas’ 46-year-old defensive coordinator has anything to hide. He’s just a grounded, totally unassuming and selfless workaholic who believes only in team. He’ll embarrass proud roosters when he arrives at Moncrief Complex well before sunrise. Like 5 a.m. early.

And that’s good news for Longhorns fans who are trying to remember a Texas defense that could actually stop somebody.

Orlando’s all business. He has little time for chit-chat, even less for self-adulation. Never mind that his salary has more than septupled in just six years, or he now oversees a defense for a Power 5 football program for the first time in his 23-year career.

Just don’t expect him to brag about that or anything else.

Was he a great player in college?

Probably still could. He’s built like a fire hydrant and speaks almost as often.

He played four seasons at Wisconsin, where he’d scooped up a scholarship offer as an all-state linebacker at all-boys Central Catholic High School over several Mid-American Conference invitations. But he never started a single game with the Badgers, contributing mostly as a rugged special teams player with 28 career tackles but just three his final season.

Oh, he loves the Madison school but hasn’t been back since his playing days. “Wisconsin’s a special place,” Orlando said recently, “but visiting Wisconsin was not high on the priority list when I’ve been busy coaching and spending time with my family.”

Hobbies? None to speak of beyond “the fun of chasing my 4-year-old daughter Addison around like a maniac” and spending time with her, his other daughter Taylor and wife Amy.

His old boss, Connecticut head coach Randy Edsall, who worked with Orlando for a dozen years there before becoming the head coach at Maryland and going back at UConn this offseason, knows a serious dude when he works with one.

“Football’s his life. That’s the thing. It’s all about football,” Edsall said. “He’s not a golfer. He wasn’t a runner or a jogger. It’s all football, and he devotes everything to it.”

So did Orlando always have a grand plan for his life?

Not exactly. He’d majored in agriculture economics at Wisconsin and was contemplating a job in securities and making big money in the stock market like friends of his until he sauntered out to a summer workout of a bunch of youngsters playing for his old high school team. He volunteered to tutor a few of them on the side. They took heart, and he was hooked instantly.

So he turned to coaching, something he’s done with distinction since taking a high school job at Central Catholic where he once played on a state championship team. His rise through the ranks has been a steady climb. His reputation has always preceded him.

In fact, Orlando landed two of the biggest jobs in his career even though he’d never laid eyes on the head coaches who hired him before his actual interviews.

Back in 1999, Edsall named him inside linebackers coach, hiring him out of Penn upon the recommendation of Mike Toop, a former Penn defensive coordinator who’s now coaching at the Coast Guard Academy. Toop told Edsall that Orlando was a tireless worker and extremely knowledgeable.

After 12 years at Storrs, Conn., Orlando had stints at Florida International and Utah State, then got a big break when Tom Herman called for an interview when he was putting together his Houston staff. They’d never met before they sat across from each other in a five-hour session in the quarterback meeting room in Columbus when Herman was preparing for the 2014 national championship game against Oregon.

“It was business,” Orlando recalled of the interview. “It wasn’t hanging around, joking with one another. It was looking at each other eye-to-eye. Not so much Xs and Os, but overall approach to coaching and philosophy, and that part clicked. To me, it’s about being aligned with the person. I think Tom hit a home run when he put together his Houston staff.”

That included hiring a 10-year defensive coordinator he’d never met although Herman had done enough research to know Orlando has made a career of putting together defenses that could take away offenses’ strengths, and doing so with an aggressive style that isn’t wedded to a cookie-cutter strategy. Plus, Orlando had succeeded at Utah State where he replaced Dave Aranda, LSU’s current defensive coordinator and one of Herman’s teammates from Cal Lutheran.

Most of Herman’s staff had a previous connection with Tom, but not Orlando, who said it took a month or so at Houston to convince his colleagues he was cut from the same cloth as the other assistants who care about the players as much as Xs and Os.

“That was a no-brainer for me,” Herman said of Orlando’s hire at Texas. “We had a two-year history together at Houston that was extremely productive. He does things in his defensive strategy that are really, really hard on spread teams. I saw that through two springs and two falls, and you’d have thought we were one of the worst offensive teams in both years. We couldn’t move the ball on them.”

Neither could Florida State, whose Dalvin Cook managed just 33 yards on 18 carries with no run longer than 9 yards in a 2015 Peach Bowl loss to Houston. Nor could Louisville as Heisman winner Lamar Jackson was sacked 11 times, didn’t complete half of his 43 passes and had a 20.3 QB rating. Oklahoma’s Samaje Perine and Joe Mixon did no better as the Sooners ran for just 70 yards. Houston beat them all.

Orlando may come across as serious, even stern, but his fellow coaches say that’s only because he is totally committed and focused. Craig Naivar, Texas’ safeties and special teams coach, compared Orlando to, of all things, a baseball pitcher.

So how much did Orlando blitz at Houston?

“A lot,” he said. “We want to attack people. We don’t want to give vanilla looks. We’re going to be creative.”

Orlando’s being well-paid to do just that. He’s come light years since taking home $133,000 at Florida International as recently as 2011. And before that, about $40,000 when he landed that first job at UConn.

Today, he works as Texas’ first $1 million assistant coach in school history, but he’ll punch in the same amount of time he did back working for Edsall.

“Todd’s really good at assessing the strengths and weaknesses of the guys he’s coaching,” Edsall said. “You can know all the schemes in the world but if you don’t have the guys who can do certain things, it’s not going to benefit you. He doesn’t put a round peg in a square hole.”

Orlando’s career clearly is on the upswing.

He was bypassed for the Houston head coaching job for Cougars offensive coordinator Major Applewhite, in part, because the former Longhorns quarterback had a clearer vision for his new staff. But it also might have been Applewhite’s ability to see the big picture as a head coach, something which could limit Orlando’s ceiling.

“I actually think Todd’s a very good college coach, but I think he would be a great NFL coach because you don’t have to worry about recruiting,” Edsall said. “He’s very intense and very unassuming. He’s just a good old-fashioned ball coach, that’s all he is. He doesn’t want the credit, and he doesn’t want his name in the paper.”

Too late to avoid that. But he may be the right guy to fix a defense that definitely needs repair. Just don’t expect him to crow about it.

Golden: Is Tim Beck as others promised to Tom Herman? This new Texas offense sure hopes so