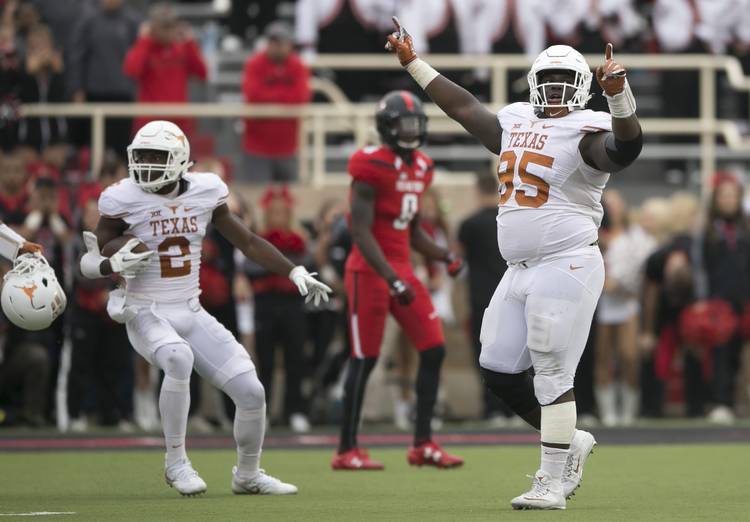 Back in South Carolina, two years into high school, he was ready to trade in his football threads for a different type of uniform.

“I would have gone to the Marines,” Ford said.

It made sense. Ford served in the ROTC at Hilton Head High while also playing football. He dreamed of a college football career, but things changed when his head coach was fired. Despondent over the direction of the program, he almost gave up football.

Then, before his junior year, he met B.J. Payne. The new Seahawks coach had some plans for the sturdy yet vertically challenged fireplug that stood in front of him.

“No you’re not,” the coach replied. “You’re my three technique. If you trust me, I will make you an All-American.”

Ford had just been converted from a linebacker to a defensive tackle.

“He didn’t say a word,” Payne said Wednesday. “He just turned and walked away.”

“After that, the scholarships started rolling in and now I’m here today,” Ford said. “I’m just thankful for everything he did for me.”

It’s what makes last week’s news so important on several levels. Texas players voted the senior as one of their four captains for the season, sending a message that what one does is much more important than what one says or how loud he says it.

Ford hasn’t said much entering his final season, but he’s done enough to earn the respect of an entire locker room and coaching staff.

On an otherwise dismal 2016 season, Ford started all 12 games and registered 5.5 tackles for loss and a pair of fumble recoveries. He also blocked a couple of extra points and didn’t make too much fuss about it after the game. Effort speaks a lot louder than words.

“I’ve been here nine months,” coach Tom Herman said Monday. “I’m not sure I’ve heard Poona Ford say more than 10 words. But he’s the hardest practicing player on our team. It’s not even close. We’ve got some hard-practicing dudes. When you see a guy that’s 5-11, 310 pounds doing the things he does day after day after day after day, he was the second-leading vote getter actually in that captain draw.”

After the votes were tabulated, Herman tweeted to Payne about Ford’s honor. “Thanks again for raising him right,” the message said.

That response resulted in 275 retweets, more than 1,400 likes and a cell phone that couldn’t hold a charge for more than an hour.

In true Ford fashion, Kaylon Ford — whose nickname evolved from his grandmother calling him “Pooh” — took the show of locker room respect in stride. He’s never been one to waste words when his time could be better spent blowing up offensive linemen and wreaking havoc in opposing backfields.

“I just always lead by example,” he said. “There are some people that may think that stuff goes unnoticed, but in the long run people see what you do every day and how hard you work. People notice it.”

Herman loves players that display outward swagger, guys that don’t mind telling you they’re going to put your jock in the dirt. It’s not the Poona Way.

During his senior season with Payne, Ford established himself as an elite player on the national level. He put on a show against rival Bluffton, which had outscored Hilton Head 290-20 in their previous five meetings. Payne said Ford finished with four sacks and 20 solo tackles. The boxscore reveals he also rushed 12 times for 51 yards and three touchdowns in Hilton’s Head’s 33-32 win.

Payne believes the enormous chip on Ford’s shoulder will serve him well as he attempts to convince pro scouts that he can make it happen on the next level, as did Casey Hampton, a similarly built Texas tank who played 12 seasons for the Pittsburgh Steelers.

Ford will have a monster season. But don’t bother asking him about it. Just watch.——

Bohls: My bold predictions for Texas? A turnaround 9-3 season (and a bowl game, too)