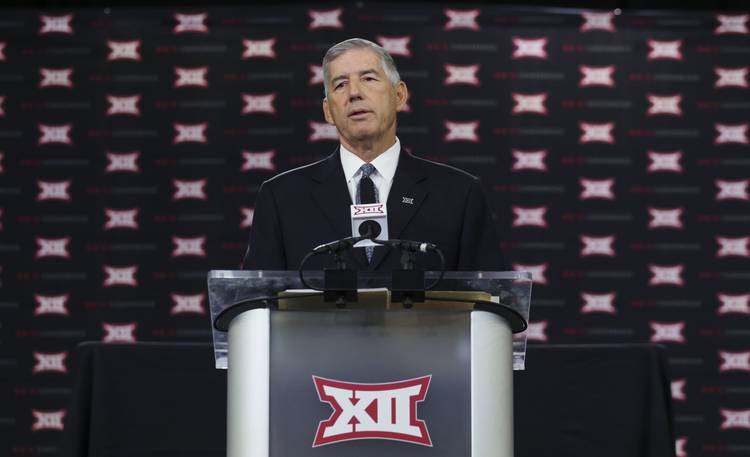 The Big 12 has brought back its conference title game to become a bigger player in national circles.

And for the money.

Don’t let them fool you. If it’s not a revenue producer then why waste your time? It’s just one more game and it allows the conference to stack chips and show strength amid the super-conference talk that will invariably find its way into college football conversations.

Besides, the television broadcast and live gate from AT&T Stadium alone are expected to produce a reported $30 million on Dec. 2, which splits nicely on a 10-piece pizza tray. It not only fattens up the coffers with those nice, crisp Franklins for the holidays but it also keeps the league in the national conversation as other conferences are playing their Rivalry Week games.

Try as it might, that league will struggle to rid itself of the “Little Conference that Could” moniker as long as its presidents and athletic directors insist on not expanding. Big 12 commissioner Bob Bowlsby was as confident as we’ve ever seen during Big 12 media days in July. He’s the voice rep of of a conference that will continue to carry the reputation of being the smallest guy in the room whenever Power 5 power brokers meet, though to hear him speak in Frisco you’d have thought the conference was 16 schools strong and looking to poach other leagues.

“(The criticism) gets a little tiresome because I know we play at a very high level,” Bowlsby said. “I know that top to bottom we’re the best in the country in terms of balance.”

You’ve read a few dozen times that the league will only thrive when the big dogs are barking the loudest. Baylor and TCU getting big-timed by the CFP for an Ohio State team that didn’t even play in its conference title game was all about national tradition and perception. If the Horns return to form as many expect under new coach Tom Herman, then those disses won’t happen again.

As far as the conference title game, there is the risk of an unbeaten conference team taking a late-season loss and falling out of CFP contention. But that’s a risk the league is willing to take. Moving Oklahoma-Oklahoma State to Nov. 3 was also a smart move because those could quite possibly be the best two teams in the league and no one wants any part of the same game in consecutive weeks.

I’d love to see the league go back to a division format, possibly getting away from the old North-South geographical divisions for a new format that separates teams that have won the most league titles into different divisions. The power base is still in the South so jazzing up the divisions would keep things fresh.

And yeah … the money will be there.