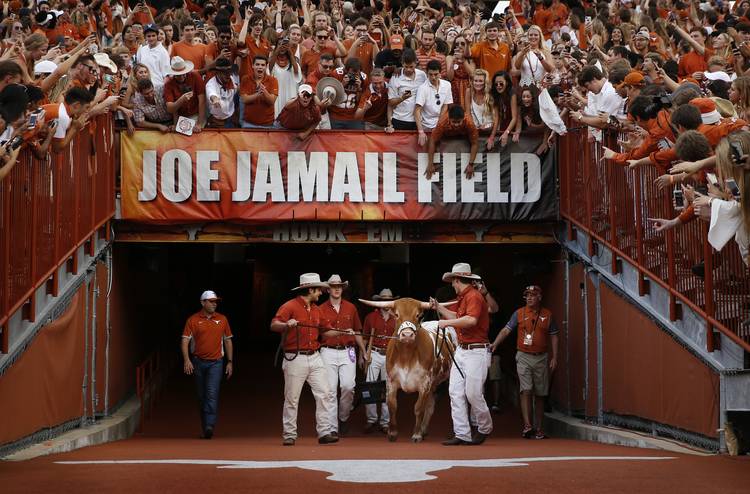 Texas officials have been quietly conducting business as normal this week in preparation for the start of another football season. But let’s be honest, this week has been anything but normal.

There should be bug-eyed anticipation for new coach Tom Herman’s debut. But as the week progressed, images from the devastation in Houston, Rockport and the Corpus Christi areas gripped the nation. The death toll was nearing 20 by midweek alone.

“My family is definitely dear to me, and they’re stuck in this situation right now,” said team captain P.J. Locke III, who hails from Beaumont. He’s one of 21 Longhorns affected personally by the storm.

Harris County, where Houston is located, is home to roughly 2,000 UT season-ticket holders. It’s the second-largest county of season-ticket holders in the state, with Travis Country being No. 1. Roughly one-third of UT’s undergraduate population comes from the greater Houston area.

What can or should the Texas athletic department do?

Multiple school officials said privately they have grappled with that question for days. “We just want to do what’s appropriate,” one UT administrator said. There was no serious talk of postponing the opener, although the school did receive inquiries if it would.

The university did not alter its academic calendar. Classes started on Wednesday as planned. UT officials did cancel a planned Friday night alumni event. Last season, the school unveiled the new Bevo XV mascot at the same function. Other smaller events were pared back or cancelled.

It’s likely that come Saturday morning, there will be a significant pulse around campus, especially for an 11 a.m. kickoff against Maryland. Once toe meets leather, as Michigan coach Bo Schembechler once said, fans will likely be fired up and ready to go.

UT officials are cognizant of the news but they’re also charged with delivering a first-class experience for athletes, students and fans. It’s a delicate balance, for sure. Had Texas postponed this game, the school would likely have been criticized for going too far.

Instead, the gates will be open, the “Showband of the Southwest” will be on the field and the Longhorns will come racing through the tunnel to a new pre-game introduction approved by Herman himself. Without giving anything away, it’s worth being in your seat before kickoff.

Herman and his chief of staff Fernando Lovo have both influenced the pre-game music fans will hear during warmups. The defensive players had a say in the music played on third downs. Even those on the kickoff team had some input on what’s played before special teams.

RELATED: Where and what to eat at DKR-Memorial Stadium during Longhorns football season

Upbeat music that players enjoy will be a key piece of the game-day experience as long as Herman remains the coach. He isn’t asking older fans to download all this stuff on Spotify. Just be open-minded.

Get ready to hear it loud and clear, though. Austin-based Big House Sound oversaw the installation of 384 speakers throughout Royal-Memorial Stadium. That includes 48 18-inch sub-woofers.

“I’m sure (former Virginia Tech coach) Frank Beamer doesn’t worry about pre-game music,” Herman said. “You know why? Because they come in with (Metallica’s) ‘Enter Sandman’ and it’s one of the greatest freakin’ pre-game entrances in all of college football. But it had to get that way at some point. And I bet you Frank Beamer had a hand in that at some point.

“So I think when we get it to where we need it to be, then you can let the machine run itself a little bit and the people you trust to run it,” Herman added. “But until then, we’ve got to make sure we’re all doing the same thing and heading in the same direction.”

Herman’s graphics team will make full use of the upgraded video board in the south end zone. There’s also 770 feet of new ribbon board on the east, north and west facades.

At the concession stands, Salt Lick Barbecue now has a place alongside Torchy’s Tacos, Pluckers and Fletcher’s Corny Dogs. Texas officials would be much obliged if you washed all that down with a Corona Extra, another new offering this season as part of UT’s partnership with Constellation Brands.

RELATED: Where to eat near DKR Memorial Stadium

Nobody affiliated with UT has suggested that a football game is bigger than life. Sports are designed to be entertainment, after all. Maybe those affected by Hurricane Harvey could enjoy a few hours of distraction.

Texas hosts Maryland on Saturday while Texas A&M plays at UCLA on Sunday. Baylor, TCU and Texas Tech all have home games this weekend, too. All of those schools have fans, alumni and students from Houston and the Gulf Coast.

Those teams can’t rebuild anyone’s house, but a bunch of Texas-based, feel-good victories may be what a lot of folks could use right now.

Bohls: My bold predictions for Texas? A turnaround 9-3 season (and a bowl game, too)

Bucking the Line: Our best bets are back this season