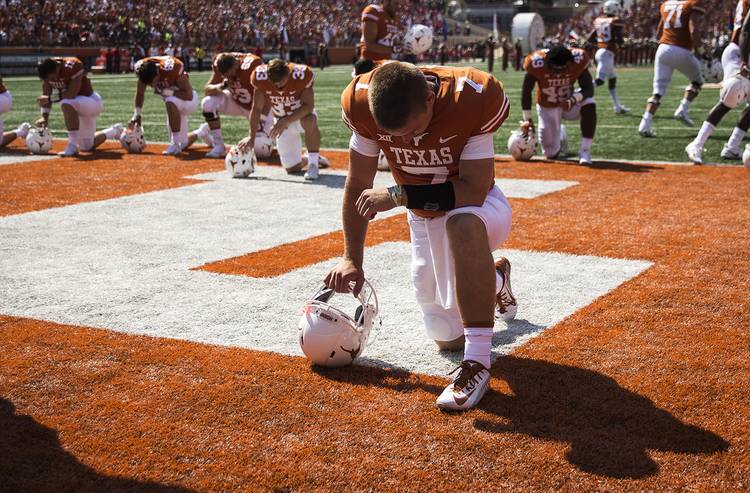 Shane Buechele can do some things on a football field, but he should be not miscast as a Vince Young or Colt McCoy.

He’s not a program savior and he shouldn’t be viewed that way. It’s unfair to heap unrealistic expectations upon the sophomore’s shoulders.

Call him what he is: A serviceable college quarterback who’ll have a few big games here and there, but one who’ll need much more help if Texas is going to win again with him behind center.

Win they didn’t on Saturday. The 51-41 season-opening loss to Big Ten middle dweller Maryland provided more shock than awe for Texas fans who have piled on to the Tom Herman bandwagon with real belief that the good times were right around corner.

Herman can fix this. But he’s not as close as many had believed during a summer that was all about team togetherness, swanky lockers and high-ranked recruiting classes. He must address the issues that ail his team and that includes figuring out the best way to utilize the quarterback position on an offense that looked terrifically unbalanced.

The final statistics show Buechele completing 34 of 52 passes for 375 yards and pair of touchdowns with a 9-of-18 success rate on third downs, but what they don’t tell you is the offense went scoreless in the first half and didn’t get into the end zone until midway through the third quarter.

Buechele’s numbers were nice but inflated because the Horns spent the majority of the last three quarters throwing the ball in a beyond desperate attempt to cut into a double-digit deficit.

Herman’s biggest successes as a coach have come with dual threat quarterbacks like J.T. Barrett, Cardale Jones and Greg Ward, Jr. Making plays off schedule isn’t Buechele’s strength, so Herman and offensive coordinator Tim Beck will have to figure out how to get more from the running game while limiting the hits on their quarterback. If that means more of Jerrod Heard and Lil’Jordan Humphrey in the Wildcat position to keep opposing defenses honest, then bring that on.

Buechele is expected to be the featured performer on this offense now that D’Onta Foreman is playing for the Houston Texans, so it came as no surprise to see him attempt a pass from his own 10-yard line on UT’s first play from scrimmage.

With the end zone at his back, Buechele surveyed most of field but missed two things in his progressions. The first was running back Kyle Porter, who was as open as an IHOP at 3 a.m. The second was Maryland linebacker Jermaine Carter, who came in clean on a blitz. Buechele didn’t dump it off. The result? A Buechele pancake minus the maple syrup.

What you saw offensively scheme-wise is what you may see for a while — Buechele throwing it 30 to 40 times while they figure out a way to some production — any production — from the running game. In fairness, big Chris Warren III only got six carries as Texas was forced to be more aggressive in its play calling after falling behind 27-7 in the second quarter.

And in case you’re wondering — and I know some of you are — Herman said he never gave any thought to replacing Buechele with freshman Sam Ehlinger, who may have become the most popular player on campus being the backup quarterback and all.

“So to pin incompletions on the quarterback all the time is not fair,” Herman said. Then later, “we need to watch film and to figure out what steps we need to take. But certainly throughout the game there was never a moment there where we even talked about it.”

Buechele had his moments, but when the Horns did put drives together, bad things still happened. New kicker Joshua Rowland missed two field goals, signifying that the special teams problems that have plagued this program over the last three years didn’t automatically disappear when Charlie Strong got run out of town.

Buechele and left tackle Connor Williams insist the problems that cropped up in the opener were administrative in nature and can be fixed.

“It’s frustrating,” Buechele said. “You always want to start out hot, but you know, we just to learn what we did wrong this first game and learn from that and carry on to the next game.”

One game does not a season make, but a sobering tone was set in the opener.

We’ll see if Herman can provide the fix in Week 2.

Bohls: Proper hydration levels and great body language will get Texas only so far