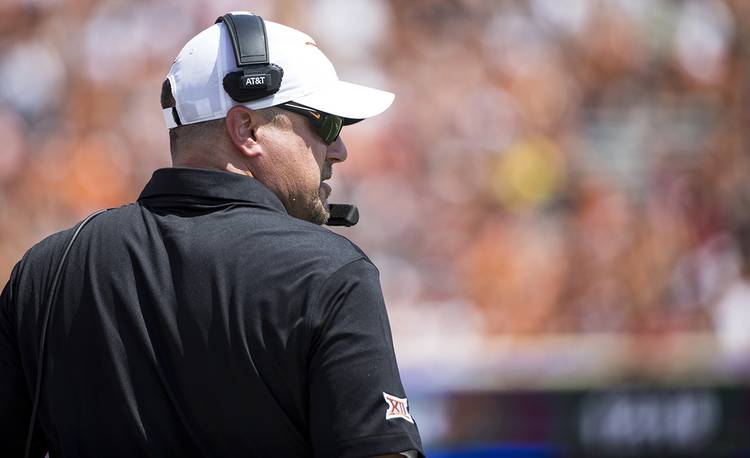 Texas head coach Tom Herman looks to the field during the first half of an NCAA college football game against Maryland in Austin, Texas, on Saturday, September 2, 2017. NICK WAGNER / AMERICAN-STATESMAN

Tom Herman struck the right tone for the most part on Monday.

But he chose the wrong words.

Of course, he wasn’t overly apologetic either and probably should have been after that inexplicable 51-41 meltdown loss to an 18-point underdog. And at home.

And he wasn’t totally honest. His team played poorly, wasn’t near physical enough, didn’t play sound football and made very few adjustments if any. He didn’t quite admit as much, say, like Florida’s Jim McElwain, who justifiably said Michigan kicked his team’s butts. Herman barely mentioned Maryland on Monday.

Texas was manhandled by Maryland even though Herman bristled when someone used that exact word, and the coach said, “Manhandle wouldn’t be the adjective I would use.” You’re right, Tom, there are other appropriate words, but this is a family newspaper. Not sure what game he was watching.

The Terrapins, who had just nine victories the last two years mostly against the likes of Rutgers (twice), Richmond, Howard and Florida International, won on the road Saturday with a sophomore quarterback who threw just two touchdowns last season and a true freshman quarterback in the final quarter.

And to think, the 23rd-ranked Longhorns lost decisively to an unranked team even though Texas scored 21 of its points on an interception return, a blocked field goal return and a punt return. You can’t exactly count on three such touchdowns every game especially since Texas had nary a one last year.

Before we go any further, let it be said the opinion here is Herman will still get it done. I really do. In time. Yeah, he needs to get it turned around in three seasons or deservedly risks getting the Charlie Strong treatment.

In the meantime, it’s OK to admit you got your butt kicked, Tom. Everyone saw it.

Herman did explain that he is not making his offensive and defensive coordinator available to answer the media’s post-game questions because he wants one clear message and wants it to come from him. That’s well and good, but his young players are accountable enough to answer tough questions, and so should Tim Beck and Todd Orlando.

Herman mentioned that his team “was trying too hard, trying to be perfect.” OK. Should they try less hard? They were about as far from perfect as you can get. We trust their pee charts were perfect, however. Proper hydration and great body language will only get you so far.

He said his team was “fragile mentally, certainly, but not fragile physically. No way.” Still, that’s a heckuva admission by a coach.

Texas just became a whole lot more fragile with the shoulder injury to Shane Buechele, who won’t be able to practice Tuesday and is questionable for Saturday’s game.

Herman also discounted the apparent unbalanced approach Texas took on offense. Herman explained away the ratio of 31 rush attempts to 53 passes as a result of Maryland bringing down an extra safety and the lopsided margin of the score. Herman said only about three of Buechele’s runs were by design, meaning 12 came on scrambles and therefore 65 pass plays were called as compared to 19 runs.

“Defense and circumstances in the game dictated that (the 14 carries by running backs Kyle Porter and Chris Warren III) more than any kind of (a lack of) faith we have in the run game,” Herman said. “Being a balanced offense, which is what we want to be, doesn’t mean we want to run the ball 40 times and throw it 40 times.”

That said, Porter and Warren had eight carries in the first half and just six in the second half even though it was a 3-point margin late in the third quarter. Those two running backs had one rushing attempt in the fourth quarter. So much for balance.

Of course, the bottom line is there is little Herman can say after such a monumental collapse. The only true answer for him is a strong game against San Jose State this Saturday.

We’d be remiss if we didn’t bring up a few of the positives.

At least Liberty is not on the schedule.

Texas doesn’t have to play any more Big Ten teams.

Southern Cal, the Week 3 opponent, struggled, too. (Albeit, against a 13-win Cotton Bowl team.)

OK, those are the only positives I have so far. Maybe the coordinators can come up with a few more when we finally catch up with them on Wednesday night.

Golden: Shane Buechele is serviceable, but needs lots of help to make a difference

Eyes on Texas: Urban Meyer is piling on, but Tom Herman ‘ain’t changing’ his methods