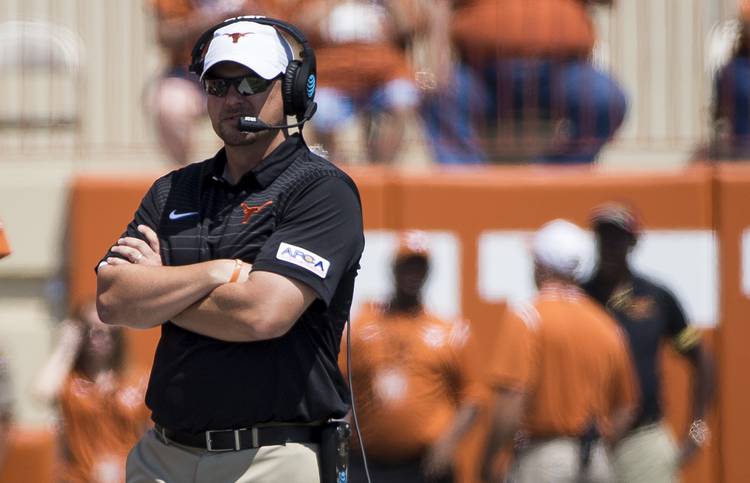 Texas head coach Tom Herman looks down the sideline during the first half of an NCAA college football game against Maryland in Austin, Texas, on Saturday, September 2, 2017. NICK WAGNER / AMERICAN-STATESMAN

The Buckeyes boss came after Texas coach Tom Herman for Herman’s post-game comments after Saturday’s opening loss to Maryland. Herman said that after nine months if anyone thought he could “sprinkle some fairy dust on this team and think that we’ve arrived, then we’re wrong.”

That didn’t go over well with Meyer, Herman’s former boss, who may still be irked over UT elbowing its way into an Ohio State satellite camp this summer in Houston.

“C’mon man. I don’t know where that came from,” Meyer told CBS national college football reporter Dennis Dodd. “It’s like a new generation of excuse. (Herman) said, ‘I can’t rub pixie dust on this thing.’ He got a dose of reality. Maryland just scored 51 points on you.”

Losing is awful, Herman said this summer. He got that part right, especially around Austin. Taking fire from all sides after one game, Herman isn’t likely to panic. If he did, there’d be real cause for alarm. Instead, he should stick to his guns and repeat his mantra from Houston: “We ain’t changing.”

That doesn’t mean Herman is stubborn to a fault. There’s simply no reason to change his coaching style and methods after one game.

OK, so Houston wasn’t a Power Five school. In Herman’s mind, a Big 12 school should simply have bigger, stronger, better players. You coach them the exact same way.

No depth chart changes were announced this week. The Longhorns are thin as it is, so there’s not many changes that can be made anyway. Freshman quarterback Sam Ehlinger is likely to start over Shane Buechele against San Jose State, although that’s because Buechele injured his throwing shoulder. No official announcement has been made yet.

Herman ain’t changing, and neither is Texas, metaphorically speaking. Considering that some fans were booing and throwing debris on the field last Saturday, there’s a group that’d like to see some real changes on the scoreboard, of course.

The players said there was no noticeable change when practice resumed Tuesday. “Most definitely no changes,” cornerback Holton Hill said. “Trust our training is what they preach to us.”

It’s clear that Herman has gone into a bunker. As of this writing, he has not tweeted once since the end of last Saturday’s 51-41 stunner to Maryland. That’s odd, because Herman is a social media animal. The hype videos that staffers usually tweet out were non-existent, too.

RELATED: Sound Off – What went wrong for Texas against Maryland; Is San Jose State a formidable opponent?

Based on the coaching staff’s comments on Monday and Wednesday, this feels like a group that may have over-estimated their own abilities or the players’ overall talent. Maybe both.

Now, reality has settled in. This is a program that’s endured three straight losing seasons. This defense is coming off two of the worst statistical seasons in school history. The overwhelming majority of those players are still on the roster.

Here’s the question to wrestle with: Would the Herman-led Houston Cougars have beaten Maryland? Why does it feel like, if given Greg Ward Jr. and Ed Oliver, the answer would be yes? If that’s true, then Longhorns fans must trust the process and give this coaching staff more than one game — heck, at least one season — before rendering a final decision.

“When things go wrong, it’s to the guy who is running it, and that’s me,” defensive coordinator Todd Orlando said of his unit. “I take full responsibility for it, and like I told the kids, the only way that I know to get anything righted is to go back to work.”

Said offensive coordinator Tim Beck, “Just put your foot in the ground and go as hard and fast as you can go. Protect the football. That’s it. Talent can overcome speed. Hard work and toughness can win a lot of games.”

You do wonder about some of the players’ reactions, though. Long before dusk Saturday, at least one player was tweeting out his own personal highlights from a 10-point loss. The majority of players have stayed off social media.

The players who spoke to reporters on Tuesday insist this is a different team from last year.

Locke seemed genuinely embarrassed that reporters learned of a 20-minute team meeting held over the weekend. A team meeting after one game? That hasn’t fixed anything, if recent history is any indication. The Longhorns also had team meetings early in 2015 and 2016, and fans know how those seasons turned out.

Texas will likely beat San Jose State, and barring a 50-point shellacking, nobody will give it much thought. The Spartans are four-touchdown underdogs. The real test comes next week at No. 6 USC.

“We’re in this for the long haul,” Herman said. “There’s going to be some bumps along the way, and we need to make sure that we stay consistent.”

Bohls: Proper hydration levels and great body language will get Texas only so far