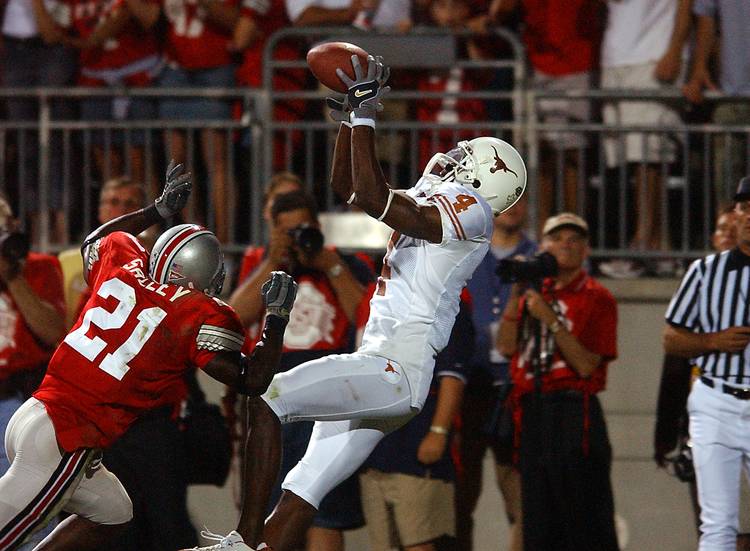 COLUMBUS, Ohio — In the end, with what seemed like half of the entire state of Ohio hollering its lungs off and most of the Buckeye defense bearing down on quarterback Vince Young, Texas went against character.

And by doing so, proved its character.

While Texas showed its collective mettle, its beleaguered coach, Mack Brown, walked off the sideline with his first victory over a Top 10 opponent in six years, since he knocked off Nebraska at Royal-Memorial Stadium in 1999.

“We’d heard all week about ‘The Shoe, ‘ ” a choked-up Brown said in the postgame news conference, awash in emotion after the victory that gives his club a big jump start toward a national title run. “It lived up to expectations.”

So did his team.

For once when it counted, Texas produced a touchdown in the closing moments of a big game instead of a meltdown. Consequently, it was goodbye, Columbus, and hello, national spotlight for a No. 2-ranked team craving validation as one of college football’s marquee programs.

“You’ve got to bring an attitude that you’ve got to have it, ” defensive co-coordinator Duane Akina said above the din as the giddy team celebrated before a tiny sliver of burnt orange-clad fans in the north end zone. “If you come to play, why feel sorry for yourself? We believed we were going to win, no matter what.”

This wasn’t the Texas team its fans have been accustomed to seeing in critical junctures. Instead, it galvanized itself against the stadium-record 105,565 intent on preserving Ohio State‘s national championship hopes, shirked off three turnovers and hung on for a precious 25-22 win despite the worst field position in the world all game long.

But Texas didn’t sulk. It bided its time and won with a crisp passing attack that confounded the Buckeyes, who widened their linebackers and constructed a cocoon for the wind-up toy that is Young.

To UT offensive coordinator’s Greg Davis’ credit, he and Mack Brown designed a play-action game plan out of the shotgun after showing the scheme on one play in the opener against Louisiana-Lafayette. They used the no-huddle to minimize crowd noise, preyed upon the outside on pass routes to suddenly clutch receivers, and even used a five-wide, empty backfield.

The Longhorns reached the Rose Bowl last season with a ground-bound offense and a pliable defense that kept opponents out of the end zone. They plotted their return there in one of college football’s biggest games ever in the second week of the season by abandoning the run and turning to the pass when they had to have it.

The incredible Vince Young has made his rep with his feet, but his suddenly trusty arm got equal billing Saturday and gave him the inside track to battle Southern Cal’s Matt Leinart for the Heisman Trophy with nearly a whole season to go.

Vincent Can Go can pass, too.

The Longhorns went against type because that was the only way they could win. So type in Texas as a winner in maybe the biggest intersectional game in the school’s modern history.

“Man, ” Young sighed, “we’ve been through this before.”

At times, it was more classic but less clinic as the Longhorns suffered bizarre turnovers and Young failed to run free of Ohio State‘s made-for-the-NFL linebackers, A.J. Hawk and Bobby Carpenter. He had just 76 yards, 32 of them on a breakaway run in the first quarter, as OSU boxed him in.

Just when it seemed that the fourth-ranked Buckeyes would frustrate Young and salt away their 37th consecutive non-conference win at The Shoe, Young rescued his team again.

And this time The Shoe fit.

The guy criticized nationally and in this space for his awkward motion and sidearm release raised his game and found Limas Sweed in the left corner of the end zone even though David Thomas — one of four Longhorns streaking downfield in vertical patterns — was the primary read.

And Sweed hauled in his first touchdown as a collegian. He and fellow wideouts Billy Pittman and Brian Carter came up large when the normally reliable ground game produced just 112 yards, despite a soulful charge by freshman Jamaal Charles.

“They really grew up, ” Davis said.

He could say the same about this program, one that has piled up win after win but remains in search of its first national crown since 1970. After jumping to an impressive 10-0 lead, Texas fell behind and trailed until Sweed’s sensational catch with 2 1/2 minutes remaining in a suddenly silent hollerhouse.

Two Orange Bowl representatives in those colorful blazers stood on the sidelines and took it all in. Right BCS stock, wrong coast. These Longhorns are looking out west.

“They just didn’t quit, ” the Orange Bowl’s Mike Dye said of Texas. “This was what it was supposed to be.”

A game between two of the biggest heavyweights in college football and the Longhorns as champions. The way it used to be.

Sooners on the rise on AP ballot

Bohls: Two games in, Texas continues to search for its identity