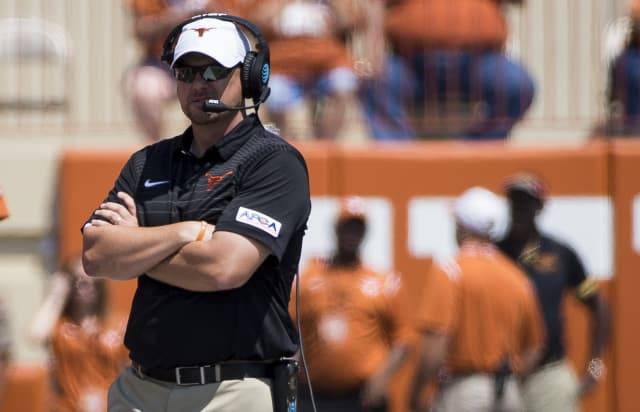 The question lingers. And may for a while.

Through two games this season, Texas is still searching for an identity.

And since Texas is bracing for arguably its steepest challenge of the year with a road trip to No. 4-ranked Southern Cal, it may not be any further along in establishing any form of trademark this weekend.

Of course, when you’re 1-1 with two outcomes as diverse as its first two games, it’s hard to declare a clear identity unless it’s unpredictability.

“We’re still trying to figure out who we are,” Herman said frankly on Monday. “On defense, we took some major strides from a recklessness standpoint.”

No one knows who the Longhorns are, Herman included. But we all know who they aren’t at this juncture. They are not yet in the same ballpark as the overwhelmingly athletic Trojans, a mountainous hurdle for the Longhorns, who could get their feelings hurt.

“We are an underdog,” Herman said emphatically.

As for that identity, the national statistics would declare that the Longhorns are an incredibly balanced offense that ranks 22nd in rushing and 29th in passing, but those don’t truly tell the tale. Defensively, they are a unit that’s yet to form a potent pass rush or tackle well but one that can create turnovers with a plus-1 margin.

Offensively, Texas didn’t so much abandon the run in the season-opening loss to surprisingly strong Maryland as it never embraced it from the outset. Yes, the Longhorns trailed by 20 points midway through the second quarter as Herman reminded on Monday, but that was a 3-point margin for much of the second half when the run game should have asserted itself.

When you consider that Herman said quarterback Shane Buechele scrambled about 12 times in his 15 runs, the math says offensive coordinator Tim Beck called about 19 run plays.

Texas was clearly a passing team by choice in that game.

Against San Jose State, a team ranked 113th nationally in stopping the run, Texas was all in. It ran the ball a whopping 59 times in its 88 snaps and accounted for 406 yards on the ground. Beck fed Chris Warren III and Kyle Porter a steady diet with 16 carries apiece as the team averaged 6.9 yards an attempt, but Warren needs the ball more.

Texas was clearly a running team by choice in that game.

Herman said Texas made “a huge commitment to running the football. We needed to possess the ball. That’s who we need to be.”

So who is Texas on offense? Certainly the quarterback position remains in a state of flux with the shoulder injury of 13-game starter Buechele and the questionable readiness of freshman Sam Ehlinger, who started last week, but it’s still too early to determine if the Longhorns want to be perfectly balanced or lean more heavily to the pass or the run.

Texas’ strength appears to be its depth and talent at wide receiver, assuming top target Reggie Hemphill-Mapps avoids getting suspended again. In preseason, Herman went on the record to call his offensive line the strength of the team — along with the defensive line — but adjusted that Saturday by labeling that group up front as “above average.”

So far both lines have been pretty average. On offense, Texas’ quarterbacks have been sacked five times and they’ve run for their lives to a large extent.

What about the defensive identity? They say they want to play physical, force turnovers and stay on the attack.

Maryland was the more physical team in the opener, but San Jose was overpowered. And the Longhorns defense has managed just two sacks in two games. That won’t get it done.

That said, the team has already scored four non-offensive touchdowns — two on interceptions, one on a punt return and one on a blocked field goal run-back. That may be the most discernible identity Texas has to date. Of course, junior-college transfer kicker Joshua Rowland is a discouraging 0 for 3 with one block.

Herman said the Longhorns have their work cut out for them and appeared less than confident. With good reason.

That big 17-point line might even climb. Herman recognizes that and went so far as to say he and his staff are in “rebuilding” mode, a term he didn’t use to apply to his inherited football team the last nine months.

That’s true, and it also explains why the identity is still unknown.

“We know who we want to be,” he insisted. “Can we be it against really good people?”

Bohls: Eleven years later, the what-ifs from the 2006 Texas-USC game not near as rosy