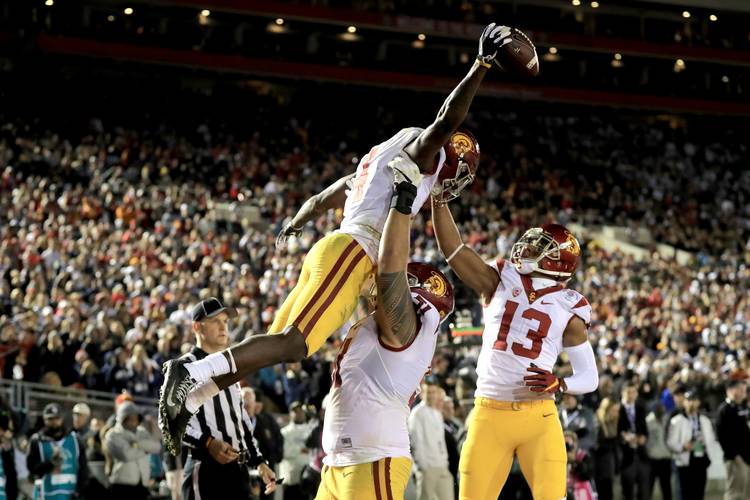 Running back Ronald Jones II #4 of the USC Trojans celebrates with teammates after scoring a touchdown in the fourth quarter against the Penn State Nittany Lions during the 2017 Rose Bowl Game presented by Northwestern Mutual at the Rose Bowl on January 2, 2017 in Pasadena, California. (Photo by Sean M. Haffey/Getty Images)

Fox is touting Saturday’s Texas-USC rematch as a revenge game.

First of all, this isn’t the national title game. Secondly, Vince Young, Michael Griffin, Brian Robison, David Thomas and Kasey Studdard aren’t suiting up against a talented USC team that’s stalking a return to past greatness.

This is Texas vs. USC, but it isn’t the 2005 clash of the titans played between the previous generation.

A TV hype ad starts with Vince Young dancing into the end zone to score a touchdown in 2006 with long-time Texas radio voice Craig Way providing the most important call of his great career. It’s music to the ears of Texas football fans.

On the ad, Way’s familiar voice then gives away to another who says Texas-USC isn’t a traditional rivalry because they don’t play every year. He adds that the Trojans have had to stew over the last 12 years while waiting to avenge one of the most bitter losses in the program’s history.

Texas’ 41-38 win went down as the greatest college football game ever played and a quick glance at the rosters of those two teams reveals it was Texas’ most loaded team ever when it came to players who’d eventually find their way to the NFL.

Mack Brown was a recruiting genius and it was evidenced by the numbers. How about 32 Longhorns on that team moving on to play in the NFL? Some of them, like quarterback Colt McCoy — then a freshman who was redshirting, just like Jermichael Finley — didn’t even get to play that night.

The Horns were loaded that season with NFL-ready talent.

“It resonates more today than it did at that time,” said Tim Crowder, who started at defensive end in 2005 before playing 60 games in the NFL. “We didn’t know Jamaal Charles was going to be the Jamaal Charles that he is today. (Defensive end) Brian Orakpo was just a third guy. Brian Robison … he’s still playing today. At the time you never know how good guys are because you practice against them every day.”

Those were the days.

This Texas team has talent, but overall it’s a fraction of the freakish truckload we witnessed week in and week out during that magical 30-2 run of 2004 and 2005. Meanwhile, USC has a potential Heisman Trophy winner in quarterback Sam Darnold, the key to the Trojans’ No. 1-ranked signing class of 2015 that included tailback Ronald Jones II and defensive tackle Rasheem Green.

In all, USC signed a handful of five-star recruits and 15 four-stars in 2015. Darnold showed up a year later. Some pro scouts believed him to be the best quarterback in the country in 2016, his freshman year.

Given the turmoil that the USC program has gone through in the years after the loss, it’s amazing that the program can continue to produce so much talent.

Over on the opposite the sideline, the 2017 Longhorns are younger in the talent department. The only player that translates to possibly being a first-round pick is All-America left tackle Connor Williams. Sure, there are others who stand a chance to get drafted one day — left guard Patrick Vahe, linebacker Malik Jefferson and sophomore wideout Collin Johnson come to mind — but the disparity between the two schools when it comes to NFL-ready talent is noticeable.

Add to that, the Trojans and Longhorns aren’t presenting us with a dream matchup. We’re nowhere near No. 1 vs. No. 2. The fourth-ranked Trojans are holding up their end nationally but the Horns are in a transition after three straight losing seasons under Charlie Strong, who did recruit well, by the way.

New coach Tom Herman spent the summer building confidence, tearing down old lockers and spending big bucks on new ones. There’s nothing wrong with any of that though you could hear the collective groan from some in Bellmont when the word “rebuild” escaped his lips Monday. USC is favored by only 16, which feels a bit generous given that Maryland rolled into Austin and posted a 51-burger in the opener.

“We are an underdog,” Herman said. “They’ve been doing this a while at Southern Cal. We haven’t.”

In time, the Horns can regain their footing and return to the top five. But that’s not happening this weekend. The most talent usually prevails in a football game, just like it did back in 2005.

It will again on Saturday, but it won’t be close this time.

Savor Craig’s call. We won’t hear another like it for a while.

Eyes on Texas: Just like 2006, can these Longhorns put it all together for one night vs. USC?