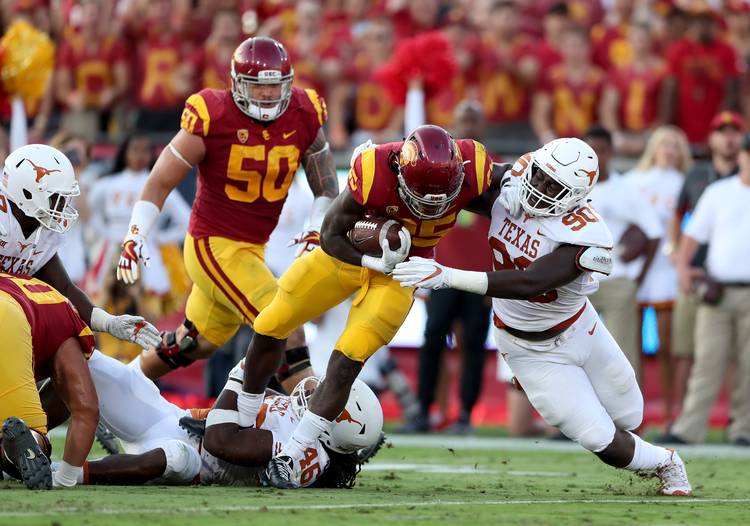 LOS ANGELES — Unlike the historic meeting between these two brand-name teams almost a dozen years ago, there was no championship on the line this time.

But championship mettle was.

And Texas displayed plenty of that Saturday night.

Along with it, the Longhorns, unranked with a misleading 1-2 record, offered the reasonable hope that a championship defense might be on the way in spite of an outcome that won’t look good in the win-loss column.

Tom Herman said in August that Texas would win with defense, and the Longhorns very nearly did in his biggest challenge to date. He faced some skepticism because local fans and media have trouble recognizing good defensive play since the futile Charlie Strong years, burdened by the worst defensive numbers in school history. Herman spouted off that Todd Orlando’s defense bested Tim Beck’s offense in all three August scrimmages, and a national-television audience saw why.

Texas’ offense wasn’t very good, and Texas’ defense showed it can be. This was good stuff, the type of play that harkens back to the Fred Akers years where outstanding defense was the norm and comingled with a lot of field goals to produce two near national championships in 1977 and 1983. This was a nearly kind of game, too.

“We have a lot of potential,” star cornerback Holton Hill said.

The 84,714 transfixed fans at the Los Angeles Memorial Coliseum watched a masterful defensive performance with well-disguised blitzes and solid tackling by a Texas team that had wilted against unheralded Maryland just two weeks before.

They saw a stout defensive line refuse to let Southern Cal dent it for any interior rushing yards between the tackles and allowed a scant 71 yards on the ground overall with a meager 1.9 average per carry. They were witnesses to a breakout performance by junior safety DeShon Elliott, who had two interceptions and two pass breakups, a fanatical effort from linebackers Malik Jefferson and Anthony Wheeler with 23 combined tackles and stellar play up front from Poona Ford, Chris Nelson and Malcolm Roach.

And every once in a while, they were even allowed to come off the field. Not often, however, as they had to withstand 88 USC offensive snaps and too often their own feeble offense.

The Longhorns offense was too often a willing aid to USC’s efforts, suffering four turnovers by rapidly emerging, poised, rookie quarterback Sam Ehlinger and seven series ending in three-and-outs. Texas defenders just could not overcome both that and a powerful Trojans offense in a crushing, 27-24 double-overtime loss that was both paradoxically uplifting and deflating.

“Pretty heartbreaking loss,” Herman labeled it. “After we lick our wounds and realize how close we came, I think we’re going to be able to build upon this immensely.”

Texas didn’t leave the field the same way it ran onto these sacred grounds. It left with surging pride but also disappointment, as appreciative fans of Texas and USC alike showered the totally spent Longhorns players with applause and tips of their caps as they trudged up the walkway toward the locker room.

Herman and his wife shook hands with Gov. Greg Abbott, who then told me, “What a frickin’ game. I thought it was over when (Armanti) Foreman caught that touchdown pass.”

So did Longhorns fans following Foreman’s terrific, first-overtime reception that for a few restorative seconds appeared to be enough for Texas’ biggest feel-good win since Justin Tucker dashed the departing Aggies’ hopes in 2011.

“I’m feeling bad,” Nelson said, “but it’s a great feeling too because we know what we’ve got. We’ve seen how far we’ve come.”

This team is not even remotely close to championship level, but it offered a vision of what might can be. The Longhorns played a top five team toe-to-toe on the road, had three fourth-down stops including a goal-line stand and did enough to put them in position to win.

What’d the Horns show in defeat?

“Heart,” Jefferson said. “We took away their game and put them in a one-dimensional offense, and we capitalized on it. This just needs to be an every-week thing.”

Herman made it a point to remind that college football standings don’t carry asterisks.

“Our guys kept fighting,” he said. “There are no moral victories in college football. They don’t put a loss and in parentheses write ‘Yeah, but they played hard.’”

But they did play hard. This wasn’t exactly a remake of the storied 2006 matchup between Texas and USC, but it could have championship implications for the fourth-ranked Trojans, thanks to heroics of the highest measure.

They know they escaped.

“I’m so glad we caught them early in the season,” USC coach Clay Helton said, “because that team is going to be really, really good.”

And sooner than later.

Golden: That was then, this is now and it’s USC, not Texas, with the NFL-ready roster