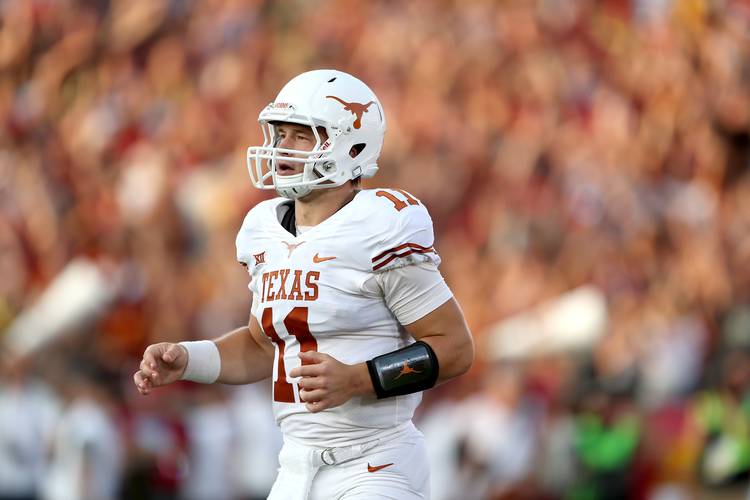 LOS ANGELES — Be careful how you handle this quarterback situation, Tom Herman.

It will ultimately tell the story of whether your Texas Longhorns will take an even larger step forward than the one they took in Saturday night’s USC rematch.

Moral victories are just another word for a team participation trophy, so it was good to see the Horns not take the bait and fly back to the ATX as a bunch of lovable losers. They showed an ability to play with the big boys and did so with a quarterback starting only his second college game. To a man, they know it’s not enough.

As for the most important position on the field, Sam Ehlinger showed us he’s a gamer though an inexperienced gamer. He also showed us he is capable of being the starter moving forward.

Question is, will he one day leave here with accolades that rival that of Vince Young, Colt McCoy, Major Applewhite or the talented yet polarizing Chris Simms, who went 26-6 as a starter? Or will he go down as the quarterback Herman should have named the starter after the USC game his freshman year?

In the aftermath of the 27-24 double-overtime loss to the fourth-ranked Trojans, Herman provided a nice little surprise when he announced that whenever Buechele returns to full health from his shoulder injury, he will get the majority of the first-team reps in practice. We’ve all heard the old-school philosophy that says a starter shouldn’t lose his job because of an injury, so I get the coach’s thinking.

While the praise came down on Ehlinger from his teammates and opponents, Herman took more of a clinical approach entering the bye week.

Here’s what the film will tell him. Ehlinger nearly won the day but played many parts of the game like an inexperienced QB playing his first road game in front of 90,000 at the Los Angeles Memorial Coliseum. The tape also will reveal moments of brilliance after a first-half no-show from the offense. At times in the second half, Ehlinger matched Heisman Trophy candidate Sam Darnold throw for throw and came within 45 seconds of forcing USC historians to actually document a loss to the Texas Longhorns.

Sure he made some rookie mistakes — two interceptions, some miscommunication with center Zach Shackelford on a couple of snaps and getting stripped on the goal line in the second overtime — but he showed plenty of grown-man courage on one of the biggest stages in college football.

Linebacker Malik Jefferson cornered Ehlinger in the locker room and told him he was no longer a freshman.

“I told him, ‘You’re a football player, you’re a starter,'” Jefferson said. “He has to have that same confidence and swagger every time he steps on that football field. So proud of him.”

It took Ehlinger a while to rid himself of the butterflies, but he showed that this stage wasn’t too big after completing 16 of 30 passes for 209 yards and a pair of touchdowns in the fourth quarter and overtimes, including a big-boy touchdown pass on the move to Armanti Foreman that put the Horns up 17-14 in the fourth.

“I didn’t know Sam had that wiggle,” former Texas point guard Isaiah Taylor told me on the sideline. “He’s showing me something.”

It was an epic 14-play, 91-yard drive that had the unranked Horns within seconds of pulling the biggest upset of the college weekend. USC found its stride but Ehlinger, playing without injured All-American left tackle Connor Williams, brought Texas back with a nice throw-back to fellow Austinite Cade Brewer in the overtime to keep Texas alive.

The kid ain’t scared, that’s for sure. He had to grow up fast after losing his dad in middle school. Football, by comparison, is cotton candy and roller coasters at the state fair.

In fairness to Buechele, he threw for 375 yards and a pair of touchdowns in the opener so he has every right to expect to still be the starter. With about two weeks remaining until a Thursday night Big 12 opener in Ames, Herman will follow his normal routine and start the guy who practices best.

There are plenty of practices between now and Iowa State, but Ehlinger should get every opportunity to finish what he started out West.

Bohls: Tom Herman has a lot to chew on after Longhorns’ near-upset of USC