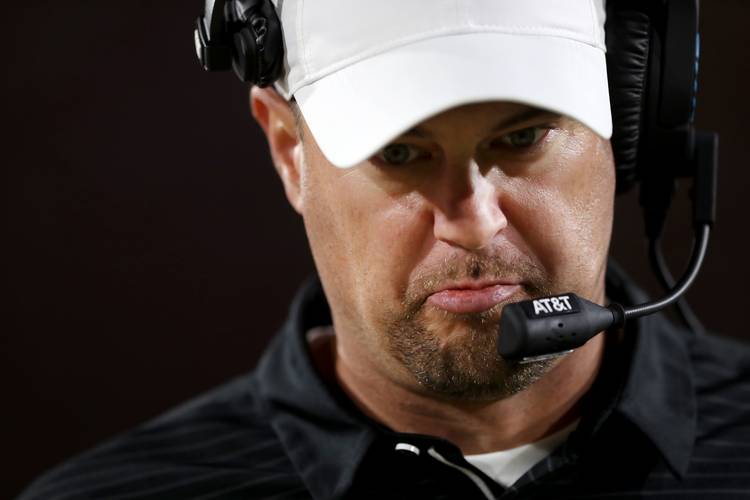 We finally got much-needed answers from Tom Herman to some pressing questions.

He chews sugar-free Dubble Bubble. Seven of ’em in his pocket per half.

He can blow a bubble with the best of them.

Some harsh critics might say he can blow a big game as well, but I’m not one of them. Not at all. He almost won one of the biggest games as a 17-point underdog.

That said, Herman, showered with praise on Saturday night, appeared a bit prickly and defensive in the wake of relatively mild criticism on Monday.

Texas played very well, almost good enough to beat the fourth-ranked team in the country, and Herman deserves credit for engineering that near-upset with a freshman quarterback and without three key offensive linemen.

The unranked, now 1-2 Longhorns came within 45 seconds of knocking off USC and pulling off the biggest upset of the early season, but Texas now faces a slew of problems, chief among them a battered offensive line, a vulnerable secondary and ragged special teams that include an inconsistent placekicker and a punt returner with poor judgment.

With that critical gum flavor out of the way, we can turn our attention to a few timely issues out of Texas’ 27-24 double-overtime loss to USC.

Like why Chris Warren III was invisible. I’m guessing the III stands for pretty much how many carries he can expect each Saturday. Didn’t really grasp Herman’s logic on why Warren got just four carries against USC and only six in the opener versus Maryland. It appears obvious Herman’s staff doesn’t appreciate the junior’s work ethic, is worried about his upright running style, doesn’t trust him or thinks Warren’s biorhythms are way off.

Like why Texas called two quarterback draws up the middle in the second overtime when it had a 250-pound back at its disposal. Uh, they were “quarterback powers,” not draws, Herman clarified. Whatever they were, they didn’t end up in the end zone even though Sam Ehlinger’s first run did go for an impressive 8 yards before he was stripped of the ball on the next play.

Like how much Herman believes in his offensive coaching staff. A lot, said Herman, perplexed why he was even asked such an unreasonable question although he himself questioned Texas’ poor first-half offense in its two toughest tests.

The first-year Longhorns head coach grew a little testy over some hard questions and was downright bothered when I asked him for his satisfaction level with offensive coordinator Tim Beck and line coach Derek Warehime and — in  particular — the offensive play-calling.

Herman paused before answering, “Yes,” and then added, “Can we get better? Sure. But the satisfaction level of the two coaches that I hired nine months ago is very, very good. We’ve got to get better as coaches, but there is nothing to tell me that we can’t or won’t. That’s an interesting question.”

It wasn’t that the play-calling was totally dubious. Todd Orlando was masterful in running the defense with terrific, disguised blitzes, three-man lines and sensational play from his linebackers in their best performance in ages.

But Beck never allowed Warren to get untracked, never called on the tight end beyond the outstanding call of a throwback to freshman Cade Brewer for a touchdown and didn’t attack the middle of the field enough with curls and slants. Beck could have courageously gone for two after Brewer’s touchdown reception in the first overtime and might have opted for a 34-yard field goal try on fourth-and-2 instead of going for it unsuccessfully on the Horns’ first series.

I can understand why Herman would be a little testy. He’s not positive what he has, and he does know his thin offensive line, the uncertainty at quarterback and the lack of results in running the ball could spell big problems in Big 12 play. There’s no assurance of a bowl game.

“We’ve got to figure out what we’re doing on offense,” Herman said. “Two Power 5 opponents, we’ve scored zero offensive points in the first halves of both of those games. So that’s something we need to address this off week.”

But if his defense plays to the level it did Saturday, he acknowledged, “We’ve got a chance to win every game on the schedule.”

There’s some big ifs — and a lot more gum to chew on.