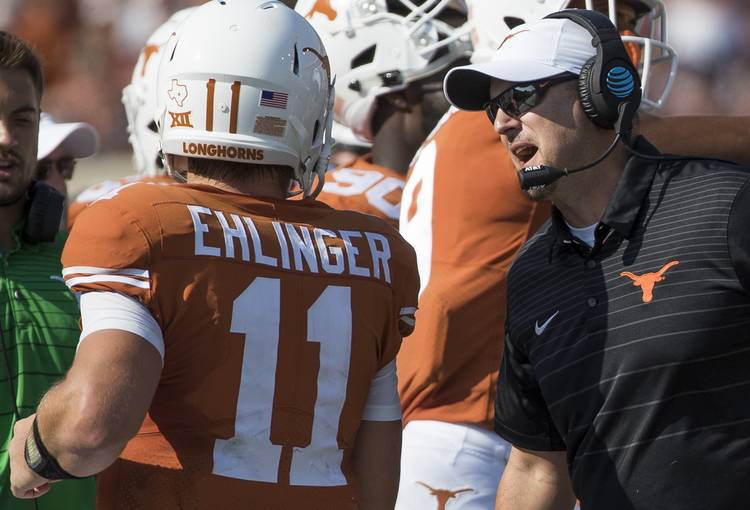 The Longhorns are 17-23 since the end of the Mack Brown era. That’s six games below .500. Nothing to brag about, that’s for sure. For comparison, Texas A&M is 26-16 during that same span and some believe coach Kevin Sumlin may not make it to November.

Tom Herman, now 1-2 in his brief UT tenure, didn’t come to Austin to lose. “Losing is awful,” he said multiple times this summer.

To change any culture, you must literally change how people think and speak inside it. You must change the vocabulary. Immediately after the game, Herman stressed, “I told ’em in the locker room there’s no moral victories in college football.” No, there isn’t. Nor should there be any at Texas, either.

If the Longhorns are to ever become champions again, they’ve got to follow Herman’s lead. He wants UT players — and fans — thinking bigger than just keeping it close against powerhouses like USC. That’s not acceptable to this coaching staff.

Herman is walking, talking and acting like Texas is a big-time superpower, albeit one that’s down on its luck in recent years. It’s clear this program should be treated as such. Instead of “We’re Texas,” maybe Herman’s message should be, “You’re Texas. Act accordingly.”

“Everybody, even to the untrained eye, can hopefully see the improvements we’ve made from Week 1 to now,” Herman told professors at this week’s faculty council meeting inside the Main Building. “We can’t lose sight of the fact that we lost the game on Saturday.

“Everybody wants to tell us how well we played and how much better we looked, how different we looked, and that’s true,” he added. “We’re going to build on a lot of those things. But we’re in a zero-sum business. You either did it or you didn’t. They don’t put the L next to that game with a little asterisk that says, ‘Yeah, but …’”

Herman stressed that he wants players to graduate and become successful husbands, fathers and employees. But lest anyone forget, “We’ve got to make sure those L’s start turning into W’s,” he said.

His assistant coaches are following Herman’s lead. How easy would it be for this staff to slip into cruise control during this off week? Not defensive coordinator Todd Orlando.

When Orlando met with reporters on Wednesday night, he admitted to smashing his headset over the final play of the first half. Texas simply wanted to get to the locker room, but instead USC’s Ronald Jones II scored on a 56-yard catch-and-run. The Trojans suddenly had a 14-7 halftime lead and all the momentum.

Just thinking about the play on Wednesday, four days later, got Orlando all agitated.

“We’re not in the second-place business,” he added with oomph. “That’s the biggest thing. When you lose some games, sometimes you get into your mind that we did this and we did that. No, you either win or you lose. It’s real simple. It’s cut and dry. It’s not my daughter getting a sticker on her forehead for coming in second place. That’s not what we do around here.”

And for the rhetorical finish, Orlando said, “We’re the University of Texas. We should win ballgames like that.”

Translation: Herman and Orlando are used to winning ballgames like that. At least, they did at Houston, going 6-0 against ranked opponents. As they’ve no doubt been reminded many times, this isn’t Houston. It’s Texas, a place that, again, is 17-23 in the last three-plus seasons.

Herman has no qualms about being held accountable. He somewhat expects it. That’s why it was worth digging into why running back Chris Warren III got only four carries against USC during Monday’s press conference. Fans want to know. This is big-boy stuff for a big-time coach.

Of course, Herman has to back up his words with wins. His predecessor, Charlie Strong, said Texas would never lose five games again on his watch in 2014. “That’s not the standard,” Strong said. Well, the Horns lost seven games in 2015 and seven again in 2016, and Strong was replaced.

Strong never spoke about winning and losing in such dire terms like Herman does. Strong never split the players into groups of winners and losers, serving the latter a bunch of watered-down eggs and soggy pancakes.

Under Strong, you never got the feeling the players truly hated losing. It was something they grew accustomed to. Losing metastasized itself in the locker room. Herman said there may come a time when the Maryland and USC losses are viewed as two of the most important losses on his watch. The first was a wake-up call and the second was a confirmation that this program may be on the right track.

“I think you can compartmentalize losing and the disdain for losing and the awfulness that it is,” Herman said Monday, “but still glean some very, very positive things from how we played and the intensity and effort level that we played with.”

There are likely to be more losses ahead this season. But odds are Herman will make life hell inside the football building when they do.

Bohls: Tom Herman has a lot to chew on after Longhorns’ near-upset of USC