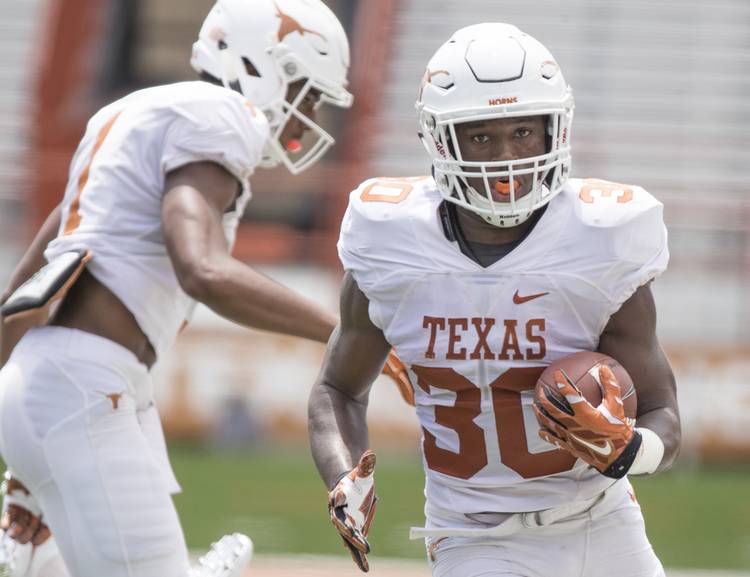 Texas Longhorns (30) Toneil Carterlooks for room to run during the Orange and white spring football game at the Darrell K Royalâ€“Texas Memorial Stadium on Saturday, April 15, 2017 RICARDO B. BRAZZIELL/AMERICAN-STATESMAN

There’s good news and there’s bad news when it comes to the Texas offense.

For one, it can’t get much worse. That may really be the best news after a 17-7 road win over a mediocre Iowa State club.

Secondly, freshman Toneil Carter showed more life and more wiggle and more burst than any of the other running backs and promises to get more playing time in the immediate future, starting with Saturday’s home game against Kansas State.

Thirdly, All-America left tackle Connor Williams is foregoing knee surgery and will be re-evaluated after two or three weeks to determine if he’s well enough to return to the field. There’s hope there.

That’s pretty much it for the extent of the good news.

The suspect offensive line, missing four of its top seven blockers in Williams, Elijah Rodriguez, Patrick Hudson and tight end Andrew Beck, is severely depleted. Head coach Tom Herman is relying on a true freshman at right tackle and playing at left tackle a very large senior who wasn’t good enough to win the job at right tackle in preseason.

The quarterback situation remains fluid with Texas alternating between sophomore Shane Buechele and freshman Sam Ehlinger, the combination of which has produced only six touchdowns through four games with four interceptions. Each has three touchdowns and each has two interceptions. Neither has separated from the other.

Buechele, operating on an injured ankle, isn’t dynamic and is 6-8 as a starter, and Ehlinger isn’t experienced. Ehlinger may be held back by his lack of ball security and decision-making — four turnovers in the loss to USC — but Herman said Buechele has had his own ball security issues. You could almost flip a coin between them, but Texas desperately needs much more out of them and may not get it without adequate protection.

The running backs have been virtually interchangeable although Herman knows he has to use Carter more frequently and stated as much Mondaye. Herman chided his running backs for not making defenders miss, and Chris Warren III and Kyle Porter have been pedestrian at best but Herman said they are running hard.

The defense has seemed to turn the corner with a tremendous pass rush and an opportunistic secondary, but the offense has produced just 17 points in regulation of the last two games.

Scoring 17 points in this league probably won’t get you many wins, even as inspiring as Todd Orlando’s defense has been of late. So how to fix a stagnant offense that ranks 45th nationally in both yardage and points?

More Carter. He’s a potential big-time playmaker, lighter on his feet and quicker in his cuts. He’s also a terrific receiver with soft hands. He’s averaging 7 yards a carry on just 10 attempts. He started alongside Porter against Iowa State and I wouldn’t be surprised if he does again.

More quick slants and curl patterns over the middle, more screens with Carter, fewer jet sweeps and more involvement with Collin Johnson although opponents are focusing on taking away the 6-6 receiver.

More Ehlinger. He’s a better runner, stronger and more physical than Buechele, and seems to inspire his teammates more. If Herman’s insistent on playing Buechele, he’d probably be wise to use Ehlinger in games as well. Buechele has taken a beating already and usually is running for his life.

Herman’s not expecting Greg Ward Jr. to show up and mask some of the deficiencies up front, but says Texas needs “a guy who can improvise and make plays with his feet. You need a steady guy that’s going to make a few yards when the yards present themselves.”

Herman said he didn’t know if he and offensive coordinator Tim Beck would have a package of plays for Ehlinger, partly because he’s nervous about having only two scholarship quarterbacks on his roster. But playing both of them might be the smarter play because it wouldn’t expose Buechele to as many risks.

Neither one of the quarterbacks will be mistaken for Kansas State’s Jesse Ertz, a rough-and-tumble style of quarterback that Bill Snyder seems to replicate year after year.

Texas needs toughness at every position because it’s short of a lot of other qualities.

Bohls: Make way for the Pirate