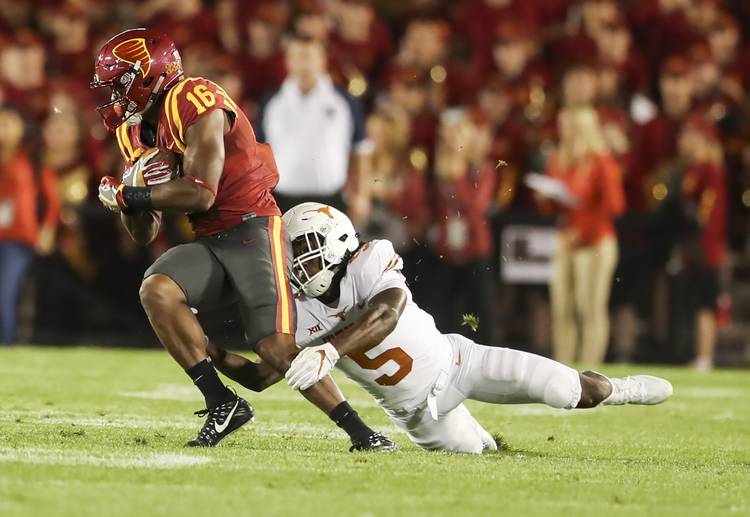 Iowa State wide receiver Marchie Murdock (16) is tackled by Texas defensive back Holton Hill (5) during the first half of their NCAA college football game at Jack Trice Stadium in Ames, IA on Thursday, September 28, 2017. RICARDO B. BRAZZIELL / AMERICAN-STATESMAN

History suggests 17 points equals a loss in these parts.

Just don’t tell that to the Texas defense.

Since giving up 41 points in the opener to Maryland, Todd Orlando’s crew is playing as if a bout of amnesia has swept through its side of the locker room. While the offense is struggling to find its identity, the other guys are getting stops and lots of them.

Like the two fourth-down drive halters in the near upset of USC or the seven points they allowed at Iowa State, which came largely because of a short field created by a 17-yard punt. They scored only 17 that night. Somehow they won the game.

Want a scary stat? Dating back to 2010, Texas teams are 2-21 when scoring 17 points or less — including an 0-10 mark during Charlie Strong’s three seasons and 1-11 in Mack Brown’s last three. Chew on that for a second and give thanks that recent history didn’t step in and deal the Horns a loss in Ames and a 1-3 start.

While you’re at it, give some deserving credit to the same players that suffered beatdowns reminiscent of Lang-Balboa I over the last couple of years. They have risen off the mat and channeled those growing pains into some successful moments early in 2017.

“I believe in all of us together,” said junior safety DeShon Elliott, who earned the Thorpe Award national player of the week. “I feel like it’s what we have believed in since camp and since spring ball. It is finally showing in the games because of the way we prepare.”

It’s strange how cyclical football can be. Texas had several outstanding offensive performances in 2016 but the defense was horrible. Now the defense has found its stroke while the offense has been beset by injuries up front and a general lack of explosiveness from the quarterback position and running game.

Tom Herman got this job mostly because he has been one of the best offensive minds in college football for the last handful of years, but the man that one reporter referred to as an “offensive guru” during Monday’s media availability hasn’t come up with the right answers overall to give us any indication that Texas will be a serious contender for the Big 12 crown, at least not without an offensive turnaround.

As he schemes with offensive coordinator Tim Beck to get some freakin’ points on the board, the much maligned defense has quietly stepped in and kept this thing from going equatorial in a hurry. The heat isn’t on just yet, but it’s getting warmer. Texas should believe 24 points is enough to beat Kansas State but the next two games (Oklahoma and Oklahoma State) will require an upsurge in offensive productivity lest the guru might take on other names from a desperate fan base.

The offensive issues notwithstanding, the Horns sit at 2-2 and 1-0 in the Big 12 thanks to the defense.

Herman has been here before. He was a first-year offensive coordinator for the 2012 Ohio State Buckeyes that opened the season with a scoreless first quarter against Miami-Ohio (which finished 4-8) and actually trailed UAB (3-9) 9-0 in the second quarter. The Buckeyes eventually got it together and finished 12-0 behind a consistent defense that included current pros Johnathan Hankins, Bradley Roby and Ryan Shazier. Rushing defense in that league is paramount to success and the Buckeyes were second against the run that year, allowing opponents just 3.6 yards per carry.

“We were not very good on offense,” Herman said. “But we found ways to mix and match parts and took advantage of a down year in the Big Ten and went undefeated.”

Herman would love for the defensive resurrection to continue in a manner similar to that team or his 2015 Houston defense led by All-American tackle Ed Oliver that went 13-1 and gave up 14 or fewer points in five games. That said, the offenses in this league are much scarier than the ones faced by those Coogs that year.

As K-State rolls into town, he has to be wondering, what will happen the next time my guys score 17?

It’s no longer a forgone conclusion, but it’s a question he would rather not hear anytime soon.