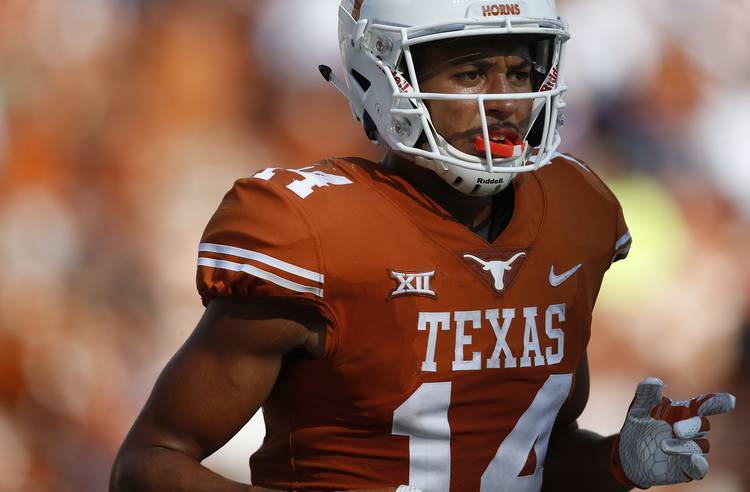 Texas' Lorenzo Joe exits the field after a Texas touchdown against San Jose State in the fourth quarter of a NCAA college football game at Royal-Memorial Stadium, Saturday, Sept. 9, 2017. (Stephen Spillman / for American-Statesman)

No matter how strong you may be, none of us are ever really prepared for that phone call.

Sometimes the news reaches us in the middle of the night. Other times it’s like a lightning bolt on a clear day. Losing a loved one is a body blow, one that can derail your entire life.

Lorenzo Joe got that call last Tuesday, two days before Texas’ game at Iowa State, and the senior wide receiver couldn’t believe the news coming from back home in Abilene. His younger brother, Brayden Grubbs-Joe, had suddenly passed away. He was gone at 21, a shocking age for anyone.

Two days before the game, Joe certainly would have been excused from practice. Head coach Tom Herman wouldn’t have blinked if he’d wanted to go back home. Instead, Joe went to practice. Not only that, but he went to Ames with the rest of the team as well. Joe led his teammates onto the field at Jack Trice Stadium while carrying the American flag. He caught a pass and helped the Longhorns clinch a Big 12 victory.

“Doing a lot better. It was a tough week last week,” Joe said earlier this week. “Getting a lot of messages from people, phone calls, and you’ve got to stay strong. That’s about it. We’re all doing well. Just got to keep moving and stay strong.”

We all deal with grief in different ways. For Joe to stick with his teammates and play speaks volumes about the family-first environment Herman is cultivating inside the football program.

“We’re going to rally around him and give him all the love and support that we can,” Herman said two days before the Longhorns faced the Cyclones.

The Longhorns certainly did. Punter Michael Dickson left his class to console Joe when that call came.

Said Joe, “I told him he didn’t have to do that. The support from the whole team is what kept me here as well. They just kept me up and encouraged me.”

Joe said his younger sister played in a high school volleyball game that Tuesday night. That’s what Brayden would want, Joe said. The scheduling worked out for both. Joe and the Longhorns played on Thursday and he was able to get back to Abilene for the funeral on Saturday.

The family had a simple request in Brayden’s obituary. “In lieu of flowers, Brayden would want people to pay it forward — i.e. give a waiter or waitress a bigger tip, take in a stray animal, or to go out of your way to help someone else in a way that would make their day a little better. Just be nice!” the obituary read.

Joe said football was an escape of sorts. “After the game, that’s when you deal with real life again,” he said.

Joe didn’t want to get into the details of Brayden’s death, but admitted that’s who he was thinking about as he ran onto the field.

Joe hasn’t been a bold-faced name on the flip card during his time at UT. In four seasons, he’s caught only one touchdown — a 21-yarder against TCU in 2015 that kept Texas from getting shut out. The Horned Frogs won 50-7. “Scoring a touchdown is always great, but that was a loss,” he said.

His best moment as a Longhorn actually came on a play the following week against 10th-ranked Oklahoma, which was supposed to have an easy time against Texas, which was 1-4 in Charlie Strong’s second season.

On first-and-10 from the OU 24, Jerrod Heard threw a quick pass to Marcus Johnson, who went racing toward the sideline. He broke several tackles, and Joe threw a critical block at the last second that allowed him to score an eye-popping touchdown.

That score gave Texas an early 7-0 lead and brought those in the north end zone to a fever pitch. Texas came to play that day, and the Longhorns captured a 24-17 upset win.

“That was actually one of my biggest moments in biggest games that I felt was kind of cool,” Joe said.

Thus, nobody should have been surprised nearly two years later when he stayed to practice despite losing his brother. Brayden would’ve been OK with that.

“I guess it just makes you appreciate him even more,” Dickson said. “We saw him at practice that same day. He wanted to do it for his brother. Just seeing that says a lot about his character.”