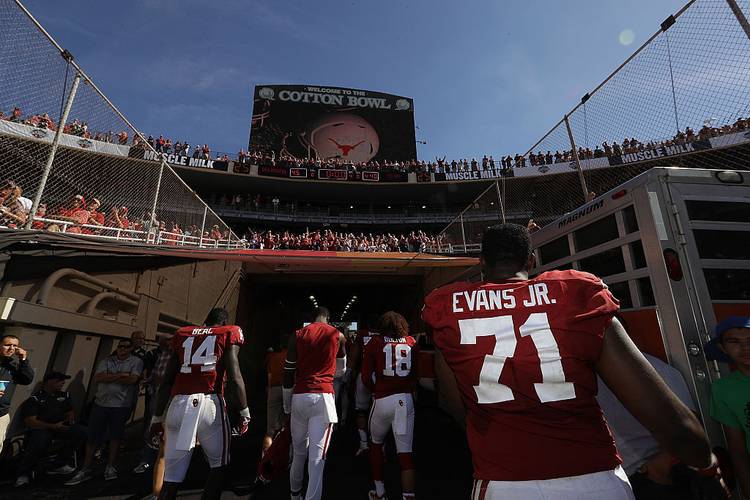 Bobby Evans #71 of the Oklahoma Sooners leaves the field after a 45-40 win against the Texas Longhorns at Cotton Bowl on October 8, 2016 in Dallas, Texas. (Photo by Ronald Martinez/Getty Images)

Halfway through Tom Herman’s Monday presser, as he addressed his underdog Texas team’s chances against Oklahoma, the thought dawned on me.

Is the wrong team favored this week?

Quite possibly, which is why I fully expect the betting line that listed the Sooners as a 7 1/2-point favorite to shrink faster than Harvey Weinstein’s career options.

Hear me out before you completely dismiss the thought as sheer folly. OU does have a clear edge at quarterback, offensive line and running back as well as at kicker, but Texas has rapidly improved at quarterback and in the line while it still searches for a power ground game and a consistent kicker. The two latter factors could doom Texas, but I think this could be a total tossup and come down to a crucial turnover.

Hence, here are 10 reasons the Longhorns might be — emphasis on the words might be — the better football team:

(1) Texas didn’t lose to Iowa State. OU did, in colossal fashion. At home no less. Against a senior walk-on quarterback who had thrown TWO passes in his collegiate life.

(2) Texas has momentum from two consecutive wins and a ton of confidence, while OU has none. OU may be the more desperate team with its entire season on the line, but is OU clearly the more talented team? Desperation only gets you so far in sports. Besides, the Longhorns, who were out of even the most ambitious or outlandish College Football Playoff scenarios after the season opener, might play a little more freely in Saturday’s contest as a two-loss team whereas the Sooners may be uptight in tense moments.

(3) Texas has the better defense. By a big margin. And statistics don’t tell the story. The eyeball test does. The Sooners have surrendered 79 points in their last two games against Big 12 second-tier teams Iowa State and Baylor.

(4) Texas has the more experienced head coach. By 26 games. This will be Lincoln Riley’s first rodeo at the State Fair while Herman at least has faced off against OU as the Houston head coach and got a win. See (1). If Riley loses his first Texas game, Sooner Nation will have serious reservations about whether he was the right person to succeed Bob Stoops, and Riley will be calling Ed Orgeron for advice.

(5) The two teams may actually be equally tested even though the Sooners have that very impressive win at Ohio State while the Longhorns fell in double-overtime at USC. Still not positive how good the Buckeyes and Trojans really are.

(6) The Longhorns have the better defensive coordinator. Granted, Todd Orlando’s unit was on its heels for a big portion of the Kansas State game and gave up big plays, but in the last four seasons, Stoops’ defenses have ranked 52nd nationally, 39th and 82nd and are 44th this week.

(7) OU’s battered shambles of a secondary has been shaky at best, atrocious at worst. In the last two games, Baylor’s Zach Smith and Iowa State’s Kyle Kempt and Joel Lanning combined to pass for 831 yards and seven touchdowns without a single interception. In addition, receivers have torched Sooners defensive backs for scores from 71, 72 and 57 yards out. Even All-Big 12 cornerback Jordan Thomas hasn’t played well at all. OU has two interceptions all year.

(8). Texas’ decimated offensive line grew up big-time last Saturday. With three new starters at both tackles and center — counting freshman right tackle Derek Kerstetter’s second career start — the Longhorns front did a great job of protecting Ehlinger and had just a single holding penalty, unlike the preceding week. While Oklahoma has the benefit of one of the best offensive lines in college football, Texas at least took some major strides there.

(9). The Longhorns have much better receivers than the Sooners. As many as four receivers already have 13 catches or more this season, and their sure-handedness and ability to break tackles for yards after the catch have been huge positives. OU won’t know whom to focus on.

(10) Yes, Texas’ Joshua Rowland has had his share of problems with just four field goals in nine attempts, but OU placekicker Austin Seibert hasn’t gotten off to a great start either. The Sooners junior has made two of his four field-goal tries, missing from 37 yards against Ohio State and from 44 yards last week versus Iowa State.

Food for thought, especially for Longhorns fans starving for their team to be relevant.

Golden: If this is Derrick Johnson’s last chance at a Super Bowl, it’s also his best chance