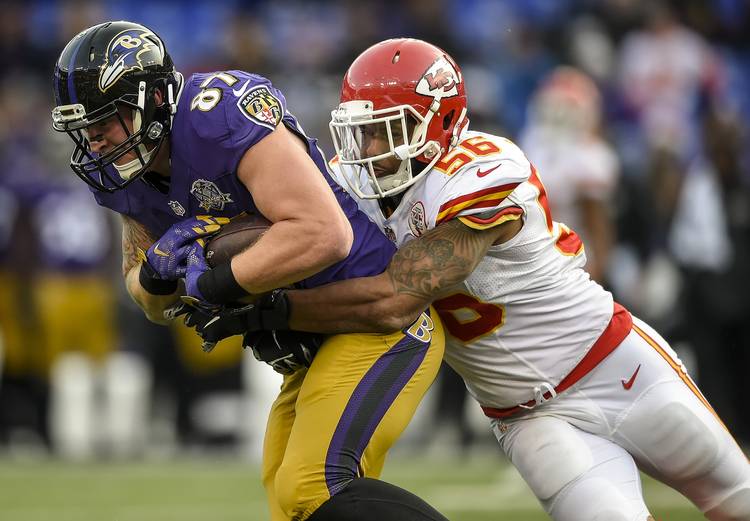 After just missing out on a college title at Texas, a Super Bowl ring has become a realistic possibility in what can best be described as the linebacker’s NFL golden years.

The Kansas City Chiefs are the best team in professional tackle football through five games and the guy they called DJ around these parts over a decade ago is on pace to make history by season’s end if things continue to fall his team’s way.

What kind of history, you ask?

How about being the first Longhorns linebacker ever to win a Super Bowl? According to the folks over in the Texas sports information department, D.D. Lewis is the only linebacker in school history to appear in the title game. Lewis, an undrafted free agent who played with Johnson in college, started for the the 2006 Seattle Seahawks who lost to the Pittsburgh Steelers in Super Bowl XL.

Now in his 13th season, Johnson wants no part of the Super Bowl talk this early in the season but didn’t mind taking a little bit of inventory after the Chiefs beat the Houston Texans on Sunday night. Kansas City is the league’s lone unbeaten team and happens to be on the short list of squads that are proficient in all three areas — offense, defense, and special teams.

“This could be one of the best teams I have been on, and it’s still early,” Johnson said after the Chiefs beat Houston Sunday night. “But do we have that confidence? We’re learning from our mistakes. We didn’t have that good of a game today as far as defensively, especially giving a bunch of yards at the end. But I tell you what, being 5-0 we can go back to the film room, correct what we need to correct, come out next week against the Pittsburgh Steelers.”

Johnson, 34, has been part of some good Chiefs teams who more times than not have fallen by the wayside in playoff matchups against future Hall of Fame quarterbacks. His chances of playing in Super Bowls have never been that great; his 12 seasons have coincided with Tom Brady, Peyton Manning and Ben Roethlisberger combining to represent the AFC in all but one of those games.

DJ is a survivor. He’s overcome two Achilles injuries in a four-year span — the last one came in December — yet retains his explosiveness on a defense that remains one of the league’s best despite losing All-Pro safety Eric Berry to the same injury in the season-opening win over New England.

“I count my blessings,” Johnson said. “I’m very fortunate to be playing in this league in my 13th year. I had two major season-ending injuries in the past, but I’m having fun with these young guys. They bring out the youth in me and I’m thankful for it.”

Johnson was a lightning-quick presence on Texas teams that just couldn’t get past Oklahoma in the early 2000s, but was part of the championship beginnings of the Vince Young era. Johnson was the best defensive player in the country in 2004 when the Horns went 12-1 and beat Michigan in the Rose Bowl. One year later, as the 15th overall pick was nearing the end of his rookie season, the Rose Bowl confetti rained down on Young as the Longhorns celebrated their fourth national title.

The four-time Pro Bowler realizes he’s playing with house money when it comes to his professional mortality. The average NFL career lasts 3.5 seasons and players like Johnson, who’ll play his 173rd career game against the Steelers. The Chiefs’ career leader in tackles has earned his status as the leader of this ball club, not only on the field but in the locker room and in the community.

“He’s the rock of this team,” said Chiefs teammate and fellow Texas ex Roy Miller. “Even when I was a younger player, DJ was an idol to me. I looked up to him just like most Longhorn fans did. To be here with him is an honor and to see what he’s doing up close and personal … that’s an honor too.”

The Chiefs may have found that perfect window between what could be the decline of the Patriots and the Steelers and their own rise in the AFC. The Denver Broncos won’t go quietly but there’s the sense that quarterback Alex Smith has found the right gear to lead this offense while Johnson, linebacker Justin Houston and cornerback Marcus Peters head one of the league’s best playmaking defenses.

Johnson knows he won’t play forever. This is his best chance.

Bohls: Underdogs vs. underwhelming — is the wrong team favored in this Texas-Oklahoma matchup?