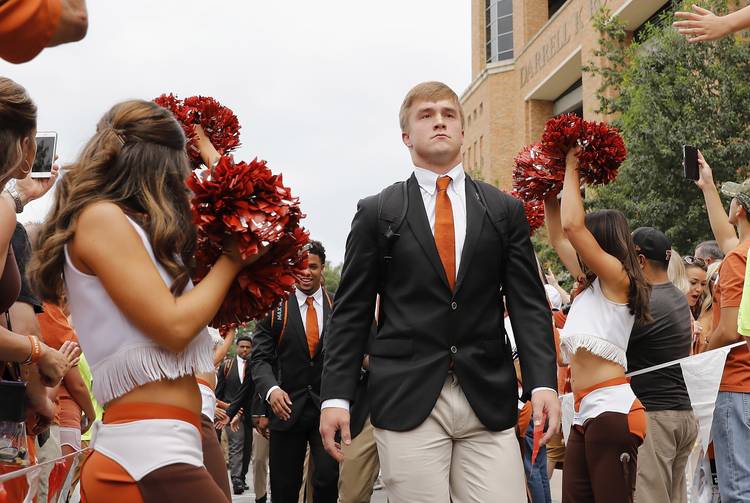 Sam Ehlinger #11 of the Texas Longhorns walks to the stadium before the game against the Kansas State Wildcats at Darrell K Royal-Texas Memorial Stadium on October 7, 2017 in Austin, Texas. (Photo by Tim Warner/Getty Images)

Social media arsonists were rampant when Texas-Oklahoma week started in earnest on Monday with the weekly news conferences. But not for the reasons you’d think.

Here in Central Texas, Friday’s Lake Travis-Westlake matchup is easily the biggest show in town. Maybe this is the year the Chaps snap that 10-game losing streak. Cavaliers coach Hank Carter sure hopes not. Considering my 9-year-old is into volleyball, we’ve got our eye on Friday’s volleyball match between the two schools, too.

Come Saturday morning, everyone east of the Pedernales River and west of MoPac should come together for Texas-OU, a matchup that showcases the best of what the Austin-area communities are all about.

Mayfield’s had a long, winding college career, but he’s going to finish among the most successful quarterbacks in OU history. He was a Heisman finalist last year and could still land in New York again this December.

Think about what a Heisman Trophy would mean to Lake Travis. It’s not seventh-star worthy, but impressive nonetheless.

Carter counted up 35 former Cavaliers currently playing college football or in the NFL. Garrett Gilbert, who played for Texas and transferred to SMU, is on the practice squad with the Carolina Panthers. Once booed out of Royal-Memorial Stadium, Gilbert now owns a Super Bowl ring from his time with the Patriots. I’d say it worked out for him.

“I think it’s certainly something to make the community proud that both schools are sending boys to the next level and they’re holding their own and then some,” Carter said.

Carter said he tries to watch every game with a former Lake Travis player, “or I DVR them.” He caught the tail end of Mayfield’s performance in Iowa State’s upset win over OU. “Baker’s probably never happy with the way he performed,” he said. “I’m sure he wants to do better.”

Carter is also proud of former tight end Cade Brewer, who is growing every week with the Longhorns. Brewer earned his stripes as a run blocker, but he caught a critical touchdown pass in overtime against USC — thrown by Ehlinger, no less.

“Comes from an extremely successful program at Lake Travis, one that he played in an offense very similar to what we expect out of our tight ends,” UT coach Tom Herman said. “So a lot of the things that we’re asking him to do are not foreign to him.”

Westlake coach Todd Dodge knows all about the Texas-OU rivalry because he played in it during the early 1980s. He threw for almost 1,600 yards and 11 touchdowns in 1984.

Now, he’s best known as a quarterback whisper of sorts. Of course, he was probably shouting at Ehlinger to run out bounds at times last season. But Ehlinger proved his mettle at Westlake, starting from 2014-16 and leaving as the school’s all-time leader in passing yards (7,491) and touchdowns (89).

Sometimes, current Longhorns want to go see for themselves if a recruit is worth all the hype or not. UT linebacker Malik Jefferson had to see for himself if Ehlinger truly was all that.

“I went to his Westlake vs. Katy game,” Jefferson said. “I could tell what kind of player he was then. I didn’t need to ask any questions. I just sat back and watched him play.”

So what did Jefferson see?

“He just wants it,” he said. “(Ehlinger’s) a guy that has a lot of poise. He believes in himself, and that’s really important that guys go out there with a lot of confidence and plays his heart out.”

It’s possible that Ehlinger is the next Mayfield, a player with undeniable moxie who can practically will his team to victory. That sure looked possible against USC. Ehlinger got stronger as the game went on as the Horns rallied and forced overtime.

Afterward, Ehlinger had the biggest smile imaginable. “It took a little bit of time to get used to the roar of the crowd of a sold-out stadium,” he said.

Then when he led Texas to victory at home against Kansas State, Ehlinger was downright giddy. “I love everything about this — the school, the team, the guys, the coaches,” he said. “It doesn’t get any better to be in such a clutch moment with a heated environment in an overtime game. There’s nothing better.”

How in the world has Lake Travis won 10 consecutive games over Westlake? “It’s hard to believe it’s been that many years,” Carter said.

It’s hard to believe those heated rivals could put all that aside the next day to watch Mayfield and Ehlinger and Brewer. Nowadays it’s probably easier than you think, considering high school athletes play together on club and travel teams in practically all sports.

Golden: If this is Derrick Johnson’s last chance at a Super Bowl, it’s also his best chance