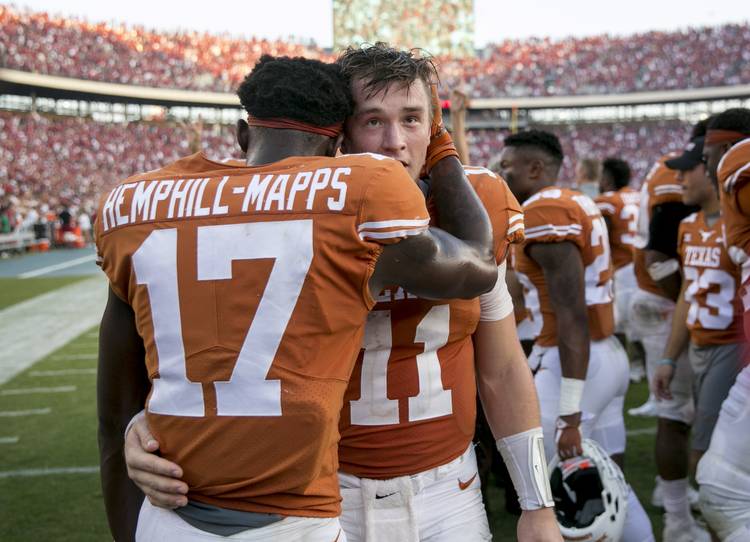 UT wide receiver Reggie Hemphill-Mapps consoles quarterback Sam Ehlinger after the loss to the OU at the AT&T Red River Showdown at the Cotton Bowl in Dallas on Saturday October 14, 2017. JAY JANNER / AMERICAN-STATESMAN

But in reality the Texas quarterback came up huge. Huger than anyone would have reason to suspect from a fuzz-faced teenager just months removed from high school.

In just his fourth collegiate start, the freshman from Westlake almost pulled off the unthinkable by flirting with a big upset of 12th-ranked Oklahoma, but failed to convert a couple of crucial fourth downs in the fourth quarter to allow the Sooners to escape and give the Big 12 hope for a College Football Playoff qualifier.

That’s the big picture, the same view that suggests Texas is in prime position with an outstanding quarterback. He’s the answer. But there are still so many other questions. He is the offense, but that unit needs help. Plural.

That remained out of his grasp as the Longhorns fell 29-24 in a thrilling game and learned they still have to wrestle with some serious deficiencies at the same time as they show signs of shaping up into a team that will be reckoned with. Ehlinger did all he could and more, even returning to the game for Texas’ penultimate offensive possession after a possible head injury when he got slammed to the ground by OU linebacker Kenneth Murray after a scramble. Tom Herman said he considered keeping in Buechele, “but when the guy played 3 1/2 quarters and is in the rhythm that he’s in, if he’s cleared, you’re going to put him back in the ball game.”

Ehlinger threw for 278 yards and a touchdown. He ran for more than 100 yards as his team’s leading rusher for the second consecutive game although no Texas running back got loose for more than 7 total yards. With considerable help from an inspired defense which held OU to a touchdown by uncovered tight end Mark Andrews and a pair of field goals after the Sooners staked themselves to a 20-0 lead, Ehlinger willed Texas back into the game.

But there would be no flag-planting by Ehlinger on this day. Or by Baker Mayfield for that matter. He allowed his linebacker teammate Ogbonnia Okoronkwo those honors at midfield.

Tom Herman has come to rely on the feisty, physical Ehlinger whose running style would compare to the subtlety of a runaway train, and perhaps relies on him too much. He carried a staggering 22 times, many by design but a lot by scrambles when they offered the best chances of first downs. His name is pronounced with a hard ‘g,’ and he runs like h-ell.

That emphasis on Ehlinger could come back to haunt Texas this season until it returns with a healthier, stronger offensive front. When he left the game for five plays in the final period, the lesser-mobile Shane Buechele entered and twice advanced the ball for first downs before getting sacked.

Following that and a false start, Ehlinger returned but threw two incompletions — one on fourth down when a Hail Mary might have been in order — to kill Texas’ last meaningful chance at a win.

Now stuck at 3-3, the Longhorns have answered the question at quarterback and stood tall with terrific red-zone defense, super competitiveness and resilience after a 20-0 second-quarter deficit and strong belief that the corner may be turned in the not too distant future.

Texas has some problems with his receivers getting separation from defensive backs and fighting to get open as Ehlinger extends plays.

Texas has a hard time protecting Ehlinger, who has perfected the spin move and in many ways copied the slippery Mayfield.

The Longhorns didn’t win Saturday at the Cotton Bowl, but quarterback certainly wasn’t the reason.

Ehlinger has arrived even if the team he’s leading still remains a step or two behind.

He’s a long way from perfect. But he’s trying to get there in a hurry.

“The atmosphere was incredible,” Ehlinger said. “Losing the game is not incredible. I’m looking forward to the next three years.”

It’s clear he needs more help. From a battered offensive line that is missing four of its best players. From the top three running backs that can’t make holes on their own and averaged 2.3, 1.2 and 0.7 yards a carry. From tight ends that offer very few targets, Cade Brewer’s quality reception notwithstanding.

As the final seconds ticked off the clock, Mayfield walked across the field and exchanged pats of mutual respect. This was the last Texas-OU contest for the Lake Travis star, but the start of many more for Ehlinger.

And the start of something big.