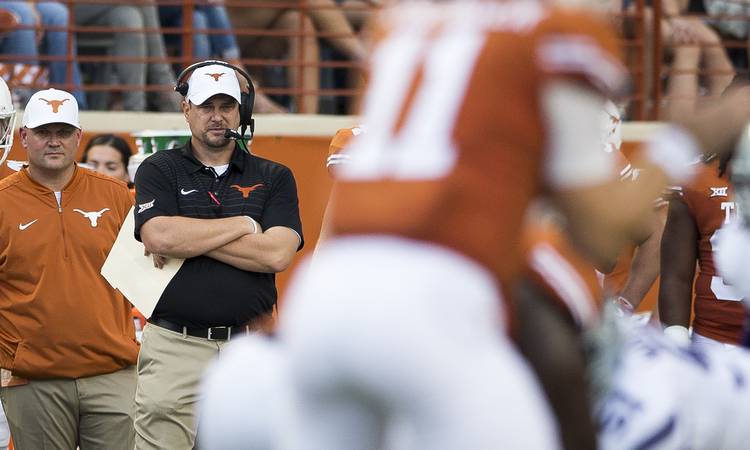 Enjoy some great games against quality opponents, but a word of warning. You won’t always get the ending you’d want for your consumer dollar.

In his first season in Austin, Herman has mastered the art of coaching an exciting team that will give as good as it gets against ranked teams before ultimately falling short. Some may want to know: What’s a moral victory really worth? Let’s see, that and $1.49 will get you a two-piece at Popeye’s on Tuesday.

To its credit, Texas didn’t play chicken against Oklahoma in the latest installment of the Red River rivalry.

The defense woke up from a first-half snooze and got after Heisman candidate Baker Mayfield in the second half.

As the Horns walked off the field after a spirited yet losing effort, there they were, the celebrating Sooners, gathered in the middle of the Cotton Bowl for what has become a story line of sorts for their program this season. Linebacker Ogbonnia Okoronkwo waved a giant OU flag while his teammates roared with approval.

They knew what was coming.

He planted it just like the dagger the Sooners planted in Texas’ heart on a real classic of a game.

This time, there was no Baker Mayfield to do a repeat performance of Columbus. Instead, the Heisman candidate let his teammates do the honors. He had already made his point with a gritty performance, crossing the tape just ahead of the sandpaper-skinned Ehlinger, who should have removed any remaining doubt that he is the Texas quarterback of the present and the future.

“Our effort was great,” Herman said. “I told our guys that it definitely hurts a little bit more because who this loss is to.We’re not going to deny that.”

Here’s the problem facing Herman and his quarterback. The wins will come eventually but they have to be wondering if there will some dubs at the end of these classics in which they have become all too accustomed to playing second chair to virtuoso quarterbacks. They threw a scare into quarterback Sam Darnold and fourth-ranked USC but lost by a field goal. Then came Saturday’s game where the Horns took the field as a nine-point underdog on some betting sites. The prognosticators appeared to be right on the money judging from how things began.

Texas trailed 20-0 in the second quarter and the mood in Longhorn Nation took on that old dreaded early 2000s feel. It was almost as if OU running back Trey Sermon would channel his inner Quentin Griffin, find the end zone six times, and recreate that 63-14 nightmare in 2000 that still stars in Herman’s and Mack Brown’s nightmares.

But the defense came to life and Texas responded in the second half behind Ehlinger, who got some end-zone paint on his pants to give his team a 24-23 lead with 2:24 left. That lead lasted 84 seconds, thanks to Mayfield who connected with tight end Mark Andrews for a 59-yard catch-and-run that pretty much ended the upset bid.

Dang that bridesmaid’s gown. Texas has to figure out a way to shed that thing before it becomes its real identity instead of a team that will figure out how to win these marquee matchups. Herman has to do a little bit of self-inventory as well. He is on record as saying hates 20-yard field goals but I didn’t know that equated to 44-yarder with 11:26 left in the game.

I know Joshua Rowland has been about as dependable as a deadbeat dad on Father’s Day but Herman going for it on a fourth-down-and-eight sent a message he will be leaning very heavily on an offense that isn’t exactly a scoring juggernaut given its injury problems up front and the lack of a good run game. Herman said the wind and the distance affected his decision to not kick.

At 3-3 and 2-1 in conference, the Horns are still in play to make some things happen over the next few weeks but the old ‘E for Effort’ thing has to be grating on this win-starved fan base.

It’s just a nicer way of saying L for Loss.

Bohls: Sam Ehlinger willed Texas back in it against OU, but needs help the rest of the way

Bohls: OU on the rise; Aggies in the mix