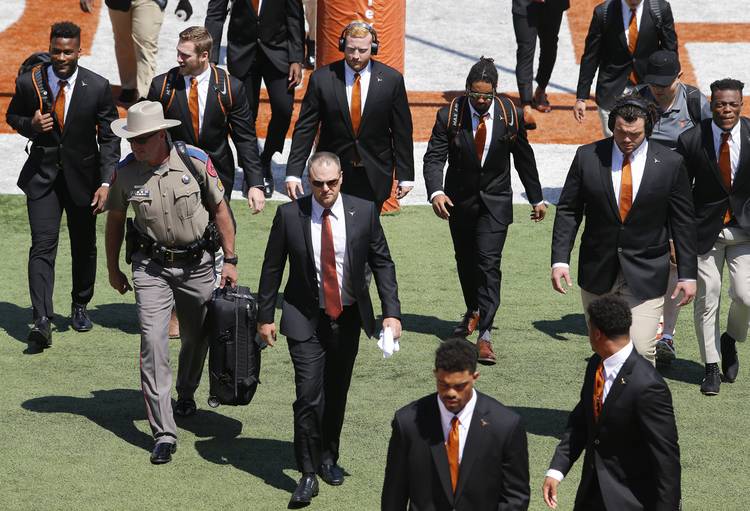 Texas could be in trouble.

And not just because Oklahoma State and its top-ranked offense are coming to town.

But at 3-3, the Longhorns are in jeopardy of not having enough wins to qualify for a bowl game. Any bowl game.

A bowl appearance should always be the absolute minimum standard for any of the 130 FBS football teams, much less Texas.

Tom Herman didn’t bite on that suggestion Monday by this columnist. He’s looking for bigger fish to fry and said he is always going to shoot for relevance in the Big 12 race in the months of November and December as his personal criteria for a successful season.

That’s well and good and an admirable goal because if you’re Big 12-competitive, you have a shot at the College Football Playoff. But when you lose your season opener at home to a Maryland team that is now 3-3 with three losses in four games, and then drop a couple of winnable games against elite teams after holding the lead in the fourth quarter over both USC and Oklahoma and now face a remaining schedule that includes two Top 10 teams and one other ranked opponent, the Cactus Bowl is starting to sound pretty good.

Most would assume Texas will have the wherewithal to beat both Baylor and Kansas here, but wins over the Jayhawks have been taken for granted before. If those two wind up in the win column, the Longhorns’ next-best chance at a sixth victory would be a home date with erratic Texas Tech.

Win six — or seven or more — wins and Herman can point to modest progress over three consecutive losing seasons. Win just four or five games, and this season has to be branded a failure, regardless of how much bad luck Texas has had in the offensive line. Charlie Strong’s teams had major injuries as well.

Herman portrayed this as a rebuilding year Monday, but he said nothing of the sort all of August. Back then, he likened his then-healthy offensive line to that of a national champion Ohio State-caliber, said his quarterbacks were not dynamic but good enough to win with, raved about the wide receiver depth and bragged on his defense.

His line is decimated. His quarterbacks have performed well. Other than Reggie Hemphill-Mapps and Lil Jordan Humphrey, the receivers have been erratic, especially Collin Johnson, who was demoted to second-string. The run defense has been spectacular, the pass defense horrible.

On Monday, Herman was retreating somewhat if not a lot. If he wasn’t waving the white flag, he might at least have had one hand on it.

“We’re here for a reason, and that’s to rebuild this thing from a bunch of years of mediocrity and sub-mediocrity,” he said. “We understand that’s gonna take time. We also want to win right now. We’ve got the playing hard and playing physical thing worked out. We didn’t in Week 1 but do now. We understand when you do that, you can take the No. 4 team in the country to double overtime, you can take being down 20-0 in points to a rival and come back to lead with 7 minutes left.”

This has rebuilding written all over it.

“This is a process. This is a journey,” he said. “We’re building a program, not a season, not a team, not a game. So we need to be mindful of where we’re headed and the journey that we’re on, but also be urgent with how we get there so we can win and win now.”

And make a bowl.

Bohls: OU on the rise; Aggies in the mix