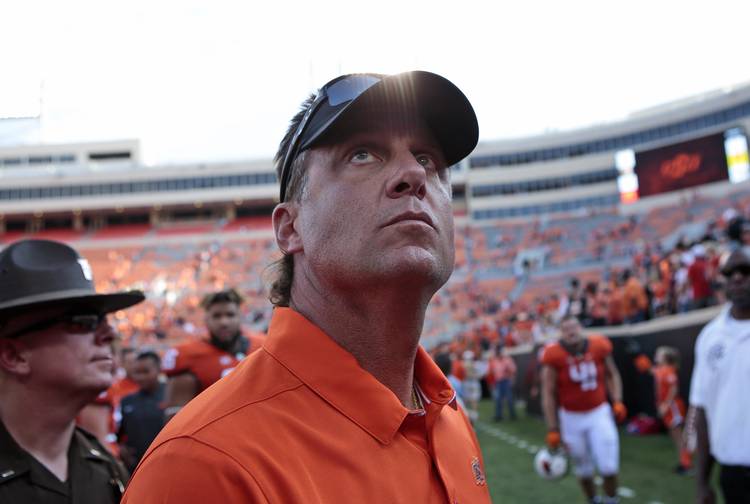 Mike Gundy promises to be on his best behavior Saturday.

Unlike he did recently at an Oklahoma State homecoming pep rally, however, the quirkiest coach in college football insists he’ll keep his shirt on when he coaches his 10th-ranked Cowboys at Royal-Memorial Stadium against Texas.

“I will have my shirt on,” Gundy vowed this week. “I’d be afraid they’d turn Bevo loose on me if I took my shirt off.”

And Gundy doesn’t want that even though he’d probably be fine if Texas did. Gundy, you see, is not only a terrific quarterback whisperer, producing great ones from Zac Robinson all the way to Mason Rudolph. But Gundy’s also a Longhorns whisperer.

The longest-tenured coach in the Big 12 raises peacocks, miniature horses, chickens and even longhorns on his 110-acre 3GB ranch outside Stillwater and, in fact, is breeding them. He owns five, giving them names like Brandy and Whiskey. All are named after alcoholic beverages, he’s not sure why, he says, maybe because his antics drive wife Kristen to drink.

In truth, there probably isn’t a hotter coach in the country than the manly, 50-year-old Gundy and probably not any who’s more secure about his job and his priorities. Remember, this is a guy who once skipped a promotional trip to ESPN to watch one of his three sons’ basketball tournament.

However, Gundy’s rants and hairdos and live rattlesnake necklaces somewhat obscure an outstanding career that has made Oklahoma State a budding powerhouse, one of only seven schools that’s been in every set of College Football Playoff rankings the first three years, joining Alabama, Clemson, Florida State, Ohio State, Michigan and Utah.

How many other head coaches can take a losing program and claim four New Year’s weekend games since 2010 or 17 All-Americans in the last nine years or five seasons of at least 10 wins in the last seven years?

“To be really honest and humble, I would say yes,” Gundy said on our “On Second Thought” podcast. “I’m OK with that. Over the last five to six years, I’ve learned what’s important in relationships with young players. When they leave here, in their exit interviews, if they say, ‘I would go to Oklahoma State again and I loved my four years,’ that would mean we’ve been successful. That’s what drives me. So I’ve learned to relax and be myself. They have to have fun and want to be here every day.”

He’s no longer the cocky, immature coach who was driven by a disciplinarian father who reportedly once threw Mike’s second-place wrestling trophy out of the car to make a point that wasn’t good enough. He’s mellowed as much as a guy who once took on Brian Bosworth for spitting in his face ever can. He’s still as feisty and driven as ever to bring Oklahoma State its first national championship since 1945.

And he’s bold — or goofy — enough to shed his shirt to show a buffed frame at a homecoming rally on campus last week after he encouraged his somewhat reluctant star quarterback to go bare-chested. Gundy does impulsive things like that, in part, because he understands the entire college experience and he’s looking to make it as fun as he does developmental.

He realizes not every Cowboys player will go to the NFL — although six have done so as first-rounders — but the coach wants to ensure they maximize their time in Stillwater. He admits he’s done “some crazy stuff” in recruits’ living rooms, but he’s as comfortable selling OSU as he is riding one of his tractors.

“If you can’t have fun every day, it’s probably not worth our time, and I should go back to farming,” Gundy said. “I’m probably better at that than coaching anyway.”

The video of the topless coach, as all Gundy videos do, went viral. But then few coaches outside a Kliff Kingsbury are as virile as he is.

Gundy may be the zaniest coach this side of Mike Leach, and it’s fitting the two are close. If both of them reached a CFP foursome alongside Nick Saban, the Alabama coach’s head might explode. Leach still talks to Gundy’s dad, whom he met when Leach was Bob Stoops’ offensive coordinator. Gundy says Leach is “more cerebral” as perhaps the only Power 5 head coach with a law degree. And funnier. What other coach describes a home victory as the equivalent of Woodstock except with your clothes on.

Gundy knows all about taking clothes off but plans to keep his on.

And he’ll still be wearing Oklahoma State colors for a long time after being locked into a longer contract. But who could blame suitors hoping to steal away the innovative, offensive wizard.

“I’m really set,” he said. “It’s a comfortable place to be. I’m not so naive to think here at some point the powers that be might think Coach Gundy doesn’t know as much as we thought he knew and we need to bring someone else in.”

And he’s doing it with lesser talent. By his count, Gundy said his team last year had 77 Texans on the roster, and only two had been recruited by the Longhorns. Has that changed?

“Not really,” said Gundy, who now has 50 Texans on his current roster, the most of any non-Texas FBS school. And 28 are on the Cowboys’ two-deep. “But I do know the majority of our guys are from Texas and Oklahoma, and they know the history of Texas football so they enjoy going down there and playing this game.”

“You go back and take a look at some of these guys coming out of high school, and they may not be the four, five-star player, but golly, they are seven- and eight-star players now,” Orlando said. “They’ve done a great job on their staff of developing talent, especially offensively.”

Which makes Gundy a five-star coach, albeit a slightly crazy one.

Bohls: Playing in a bowl game should be Tom Herman’s standard for first-year success

Bohls: Texas is playing inspired defense, but not enough to will the offense to points or wins