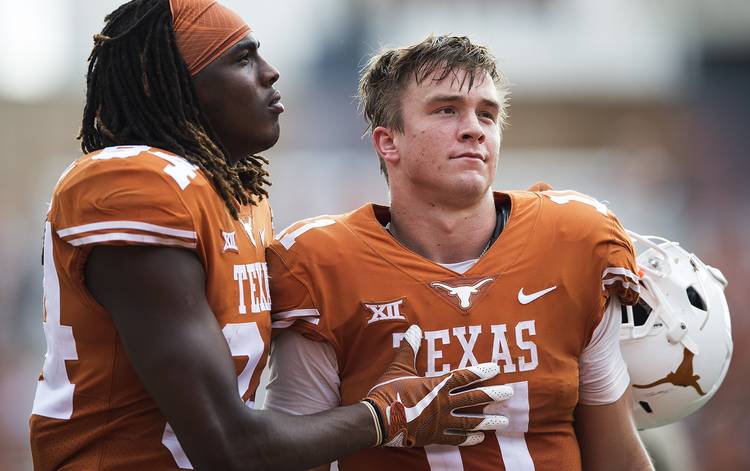 Chris Warren gave a simple answer to a simple question.

And it spoke volumes.

“Chris, why isn’t the offense holding up its end?”

“Because we don’t have a running game,” the Texas running back answered. “I think we’re too one-dimensional and that’s easy to predict, so that’s why we’re not helping the defense.”

They don’t and it’s not entirely Warren’s fault. He can only carry the ball when it’s given to him. So he isn’t Tom Herman’s cup of tea. Doesn’t mean he can’t do the job.

Warren finished with 35 yards on 12 carries in the 13-10 overtime loss to Oklahoma State. He was never D’Onta Foreman, but he does share one trait with the Houston Texans rookie who was in attendance Saturday: He’s a volume runner who gets better when he’s fed the ball continually. That’s a road the Texas coaching staff appears uninterested in traveling.

The numbers say Texas is a poor running team when it comes to its backs. Worse yet, the Horns are an unwilling running team.

One week after a tough loss to Oklahoma, Texas went with the same script we’ve seen for most of the season with Sam Ehlinger playing the lead role as both the runner and the passer. The biggest failing of Tom Herman and offensive coordinator Tim Beck is the inability to find any kind of running attack outside of the quarterback position. That could keep this team out of a bowl game come season’s end.

Herman is off to a 3-4 start in his tenure and his play caller was far below average against a defense that gave up 94 points over its last three games. Texas finished with 283 yards of total offense and had neither the ground nor the pound to take advantage of a stellar performance from the defense against one of the nation’s most prolific offenses.

If this is fine, then we’re in for one rocky ride in the second half.

Simply put, Beck and Herman are placing too much on the freshman quarterback’s shoulders. Ehlinger is also being put at more risk than the guys who signed up here here to run the ball. He has 77 carries in the last four games that could prove fatal given his penchant for lowering his shoulder and turning the ball upfield as opposed to getting out of bounds to avoid unnecessary punishment.

On the outside, the receiving corps entered the season as one of the deepest in school history while Warren seemed poised to take over for Foreman. As it turns out, Ehlinger hasn’t spread it around to those wideouts or running backs as we had hoped, and that’s on the play-caller. One of those receivers — Armanti Foreman — hasn’t even played an offensive snap from scrimmage in the three last games. He still leads the team in touchdown catches with three. No other wideout has caught more than one.

This isn’t on Sam. He’s a gamer, but he can’t do this all by himself. Sure, a lot of folks are piling on him today because he showed his inexperience in overtime when he threw that ill-advised pass into the end zone. The interception was a microcosm of what’s gone on in Herman’s first season: Mostly a day late and many rushing yards short.

The current Ehlinger-heavy mix isn’t one that will lead to success. Colt McCoy was the last UT quarterback to lead his team in rushing for an entire season, but that 2008 team — which finished 12-1 and beat Ohio State in the Fiesta Bowl — was Mack Brown’s second best team for my money. They didn’t run it much in conventional fashion because McCoy was at the controls of the best passing offense of any of Mack’s teams — 3,859 yards passing, 34 touchdowns, and just eight interceptions.

He rushed for 561 yards while the next four runners combined for 1,371 yards, for an an average 105.4 running-back yards per game. That’s on top of the 43 Colt was giving them every week.

The other Texas QB to lead his team in rushing under Mack? Vince Young in 2005 and we all know how that turned out.

As for today’s team, expect some bounce-back Saturday in Waco.

But don’t expect it be easy. Rarely has anything been easy for the 2017 Longhorns and their game but overtaxed freshman quarterback.

Bohls: Texas is playing inspired defense, but not enough to will the offense to points or wins