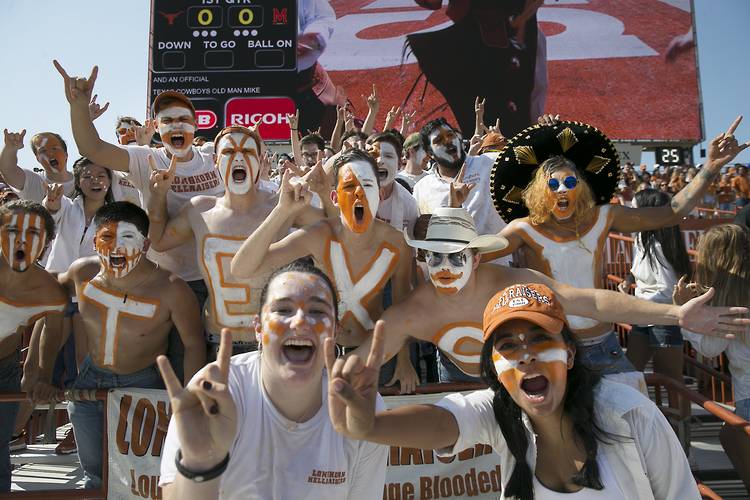 Texas students must first get a free COVID-19 test before they can obtain a ticket for Saturday's season opener at Royal-Memorial Stadium. RALPH BARRERA / AMERICAN-STATESMAN

Texas football fans have a well-earned reputation for being a late-arriving bunch, but something looked amiss last Saturday prior to the Oklahoma State kickoff.

There was a gaping hole in the student section — specifically sections 26, 27 and 28 on the east side of Royal-Memorial Stadium. And the south end zone, where freshmen sit, was a ghost town.

Um, where’s all the students?

“I was disappointed,” head coach Tom Herman said, who tends to notice these things. “I was disappointed that we had performed to the point where the students had that kind of apathy for it. So we’ve got to do a better job.”

As it turns out, students were lined up outside the stadium frustrated that they couldn’t get in. Before anyone rolls their eyes at the millennials, understand the reasoning is far more complicated than it seems.

Our story begins on Sept. 2, when 12,000 UT students showed up to watch the season opener against Maryland. The next day, UT fire marshal Jimmy Johnson contacted men’s athletic director Mike Perrin and reported there had been serious overcrowding issues in the student sections.

Approximately 16,000 students purchased “The Big Ticket” sports pass this year, Perrin said. That’s down from historical norms but about on par with the last three years. From a safety standpoint, 4,500 students can’t cram themselves into a section designed to hold 3,000. Something had to be done.

The next week, Texas officials implemented a wristband policy. Anyone who tracks this on social media likely knows that UT students aren’t too fond of this rigmarole.

Students, like all fans, can print out their tickets at home. Whether they count their blessings for not having to spend Tuesday mornings doing a ticket pull at Bellmont is beyond me. Get off my lawn, too.

Starting with the San Jose State game, UT students had to take their printed ticket to Gate 4 of Mike Myers Track and Soccer stadium before kickoff and get a wristband that essentially confirmed their seat location. Then they entered Royal-Memorial Stadium and got checked by security personnel.

If students’ paper tickets match up with their wristbands, they are allowed into that section.

“What we have learned in the last couple of years was that tickets may have been duplicated,” senior associate athletic director Arthur Johnson said.

“Once they get into the stadium with a ticket that might be in the northeast corner or the upper deck,” Johnson said, “they copied one of the print-at-home tickets, pull that out of their pocket and use that to get into a more desirable section. Obviously, that’s the sections closer to the 50-yard line.”

Students can pick up their wristbands several hours before kickoff. UT opened the wristband window at 8 a.m. for the Oklahoma State game, Perrin and Johnson said. Students probably showed up at 10 a.m. for an 11 a.m. kickoff last week, right?

Johnson said UT athletic department officials took members of the UT student government up into the operations control room and showed them those photos. Athletics is essentially asking for help.

“It takes too long to get wristbands,” tweeted Shelby Callaway, a UT student. “Sure, tell us to get there earlier but students already prefer tailgates over the lame pregame fest.”

Well, if that’s the case, why not distribute the wristbands earlier in the week? “As you know, it’s a very bright student body, very talented,” Johnson said. “We feel like if we distribute those bands a day early, they would be duplicated.”

Some aren’t so bright, apparently. Before the Kansas State game, Johnson got an interesting phone call from those over at the wristband window.

“A young man showed up over there,” Johnson said, “and we assume he was a pledge, probably got a little nervous and said he was told to come over and get a wristband because he had to go copy them for some people.”

“The last thing we want to do is make it harder for people,” Perrin said, “because the four or five years they’re here is when we hope they’ll want to become a season-ticket holder at some point in their life when they have the time and discretion to do it.

“So, it’s far from our desire to be punitive or restrictive or otherwise impede the fan experience,” he added.

Perrin and Johnson said the wristband policy will remain in place for the last two home games against Kansas (Nov. 11) and Texas Tech (Nov. 24). Something tells me overcrowding won’t be an issue.

The bottom line is that UT wants students, adults, everyone to get to the games on time. The school encourages fans to be there from “Eyes to Eyes,” a riff on “The Eyes of Texas” played before and after games.

Golden: Tom Herman has no worries leaning on his defense (because he has to)