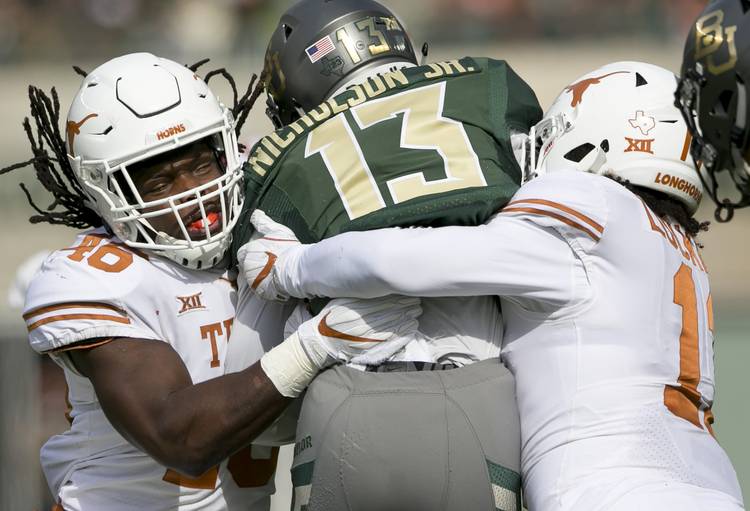 WACO — Texas proved to be miles better than Baylor on Saturday, but a few inches revealed Tom Herman’s true concerns on one side of the ball.

Inches were all that separated his Texas Longhorns from a touchdown late in the third quarter.

Herman has never hidden his disdain for kicking short field goals. He hates them the way Suge Knight hated Puffy, the way Pepsi hates Coke. To give in and not try for six is to go against his swashbuckling nature.

“We were playing great defense and to have it at three possessions I thought was important, because I was pretty certain at that point that we were going to to be able to hold up defensively,” he said, “and wanted to make sure sure we came away with points and pushed that lead up to three-possession mark.”

I know, some of you are out there wondering, “Well, if he believes in his defense so much, why didn’t he go for the touchdown with the knowledge that to fail would still mean the Bears had 99 yards separating them from the other end zone?” Good question. Could be that Herman was well aware that Texas entered the game 6-for-15 on fourth down.

The safe play probably didn’t matter in the long run. Rowland got his field goal, Texas got its 17-point lead and the Longhorns cruised to a 38-7 win, its easiest conference game since a 59-20 blowout of Kansas in 2015.

On the other hand, this defense has gone Scrooge McDuck on the competition lately. Linebacker Malik Jefferson, cornerback Holton Hill and safety DeShon Elliott are playing like first-round picks while ends Breckyn Hager and Malcolm Roach have become the disruptors that Todd Orlando had hoped to see.

A team that’s giving up 13.7 points over its last three games in the offensive-heavy Big 12 is going to be competitive in every game, even if the offense struggles.

Now as the Horns revel in getting back to .500 overall and 3-2 in conference — the Horns are also within two wins of bowl eligibility — the questions moving forward will continue to revolve around the offense because that’s the side that’s still working its way toward the sort of consistency that will allow Herman to stack some wins. Sure, they took care of the Bears as expected and dominated against a quarterback combo of Zach Smith and Charlie Brewer, but the Horns remain a work in progress in that area.

The good news is they don’t need much these days. If they can put up 400-plus yards of offense and score 31 points each week and keep the turnovers at a minimum, there will be zero complaints coming from the defense or the coaches for that matter.

Shane Buechele looked good in his return to the starting lineup in place of Sam Ehlinger, who sent him a good-luck text message Friday night from Austin. Boo Jr. was comfortable with 256 yards passing and another 42 rushing against an overmatched opponent, but one shouldn’t underestimate the importance of making positive offensive plays, regardless of the opposition. It’s one thing to talk about moving the ball, but there’s nothing like the real thing.

Texas wasn’t perfect, but was effective and Buechele did a nice job of running a high-tempo show that seemed to get better as morning turned to afternoon.

“Yeah, you know, it was a big thing in practice but we didn’t think we would use it this much,” Buechele said. “But when it’s working, you’ve got to keep going. Once you get on that little roll, it’s hard to stop.”

Buechele wasn’t the only one taking advantage of the stat party after a slow first half. Freshmen runners Daniel Young and Toneil Carter combined to run for 130 yards with a pair of touchdowns against the nation’s No. 114-ranked rushing defense. We may have also witnessed the another step backward for junior Chris Warren III who carried the ball only two times, both in the first half.

It’s on to Fort Worth from here. The last time Texas visited Cowtown, the TCU scored 30 points in the first quarter en route to a 50-7 beatdown over some of these same players.

It’s time to see just how much things have changed.