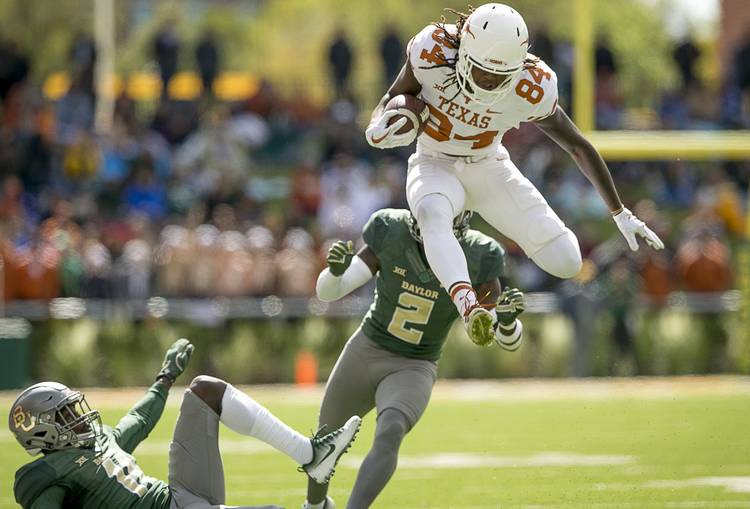 UT wide receiver Lil'Jordan Humphrey (84) flies through the air after hurdling a Baylor player in the second half at McLane Stadium in Waco on Oct. 28, 2017. JAY JANNER / AMERICAN-STATESMAN

Yes, it was Baylor.

With that qualifier out of the way, let us at least concede that the much-maligned Texas offense has shown signs of life.

There is a pulse.

And that, my friends, is a noticeable improvement and yet another measuring stick for a program trying to field a complete team, especially in light of this week’s opponent, defensively strong TCU.

A Longhorns team that has sputtered and stalled for a good portion of this season finally got it into gear in Waco — yes, it was winless Baylor; let’s move on — and showcased what Tom Herman called “an extremely balanced” effort.

“We can see the other side of the wall,” the Texas head coach said Monday. “We can see a little sunlight coming through. My confidence is at an all-time high, and I think our players’ are, too.”

There were good things about Tim Beck’s offense. Noticeable things. That’s a vast improvement over a unit that managed one touchdown against defensively-challenged Oklahoma State and the same on the road against the best two-loss team in America in Iowa State, albeit before the Cyclones went into a phone booth and transformed themselves.

This much appears obvious for an offense that before Saturday had zero punch on the ground and decidedly mixed results through the air and now ranks 46th nationally in yards and a pedestrian 78th in rushing.

The commitment to young running backs Toneil Carter and Daniel Young should continue. Each rushed for at least 60 yards. Both showed a burst and an explosiveness that has been lacking all year. Herman said he loves their vision, decisiveness and ability to break tackles.

Herman doesn’t see a lead back yet, but said the two freshmen “definitely seized an opportunity to create more reps for them and more carries, and that’s encouraging. When an offensive line blocks a play for 3 or 4 yards and you’re getting 7 or 10, that’s very good.”

There’d be nothing wrong with sticking with sophomore quarterback Shane Buechele the rest of the season. Herman said he’d love to “ride with one guy” these last four games, and at this juncture Buechele appears to be the better choice. He’s more accurate than freshman Sam Ehlinger. He’s probably healthier than the physically battered Ehlinger. His mobility looked much better than usual (yeah, I know, it was Baylor). He’d probably provide the offense with more continuity and stability.

Those short passes on slants and drag routes worked well as Buechele and the offense got into a rhythm with only seven incompletions and only one more pass than run among the 71 snaps. Would love to see more of the same with more touches for Lil’ Jordan Humphrey. Even liked the trick plays. On one, Chris Warren III threw a nice pass on that trick play. Baylor just made the end zone too small.