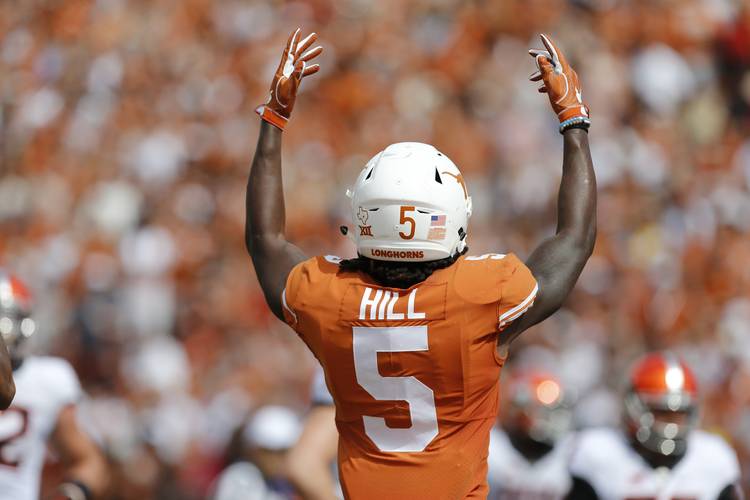 Texas defensive back Holton Hill (5) looks for more crowd noise in the second half of a Big 12 Conference football game at Royal-Memorial Stadium, Saturday, Oct. 21, 2017. (Stephen Spillman / for American-Statesman)

After a dynamite freshman season, Holton Hill appeared to be on the fast track. The Texas cornerback started the final eight games of the 2015 season and was widely considered one of the team’s best defenders.

But then came 2016. He looked slow, got beat on occasion and just seemed like a totally different player. Eventually, Hill got benched and became a VIP member of former coach Charlie Strong’s doghouse.

“I really wasn’t focused and just lost my spot,” Hill said with a shoulder shrug.

A new coaching staff energized the entire defensive unit, and for the first time in years, the secondary is trending in a DBU-like direction. With all due respect to DeShon Elliott and his national-leading six interceptions, there’s strong evidence that Hill has been the best player on the back end.

“Yeah, absolutely. There’s no doubt about it,” defensive coordinator Todd Orlando said. “I don’t think there is an argument, to be honest with you. DeShon, he’s got the interceptions and all that stuff, but when you live out on that corner, to sit here and knock on wood, (Hill’s) been playing lights out.

“To play corner in the Big 12? Whew,” Orlando said, shaking his head. “And to play it at the level he’s doing? I mean to me, he’s our dude back there right now.”

So what happened? UT coach Tom Herman says there’s no magic offense or defense alignment. Orlando presents multiple defensive fronts, but even he’s admitted, “You can’t trick anybody.” How did Hill go from getting benched last season to second on the team in tackles with five pass breakups, two interceptions and three touchdowns?

“For me, it was more about trusting in my coaches and having confidence within myself,” Hill said. “I know I’m a good athlete with good speed. I just put myself in position to make the plays.”

Hill may not admit it, but he was crushed when former defensive backs coach Chris Vaughn was surprisingly let go in February 2016. Vaughn’s name surfaced in connection with the NCAA investigation at Ole Miss. UT officials, fearing of what might come next, cut ties with him immediately.

That decision sent Hill and the rest of the secondary into a tailspin. Strong hired Clay Jennings, who had a lengthy résumé in college coaching. But for whatever reason, it just didn’t work, at least not for Hill.

Herman and Orlando brought cornerbacks coach Jason Washington along from Houston. Multiple players have earned all-conference honors under Washington’s tutelage, and the Cougars had three players drafted the last two years. William Jackson III was a first-rounder with the Bengals in 2016.

“He’s a phenomenal coach,” Hill said. “When he first got here, he took us in and showed us what he wants us to be. He showed us how we were doing it wrong and showed us how it should be done. So we just trusted in him, listened to him all throughout the offseason and it’s turned us into phenomenal players.”

Hill’s play is grade-A proof that Herman and Orlando believe coaching is more about relationships than anything else. Both coaches are big on explaining why something is important, not just how to do it.

“It’s a piece of coaching, but to me it’s that bond you have with a guy where he says, ‘Here you go coach, here’s my heart, coach me up,’” Orlando said. “If you don’t have that, there’s always going to be some hesitation and some part that says I don’t really believe in this. That’s when you get a hesitant player. That’s when you get into bickering matches, and all of a sudden you lose the kid.”

For a player who needed a shot of confidence, Hill could not have scripted a better start this season. On the third play of the season opener, Hill intercepted a Maryland tipped ball and went 31 yards the other way for a pick-six. As if that wasn’t enough, he also caught a blocked field goal off the bounce and didn’t break stride on a 65-yard touchdown return.

The next week, Hill had a 45-yard interception return for a touchdown against San Jose State. Two games in, he was UT’s scoring leader.

“I have high expectations for myself, but not that high!,” Hill said with a laugh. “I really wasn’t expecting that. If you hustle and work hard, go full speed every play, good things happen.”

It takes a village to slow the Big 12’s best receivers. But Iowa State’s Allen Lazard had five catches for just 63 yards. Oklahoma State’s James Washington had only four catches for 32 yards against Texas. Baylor’s Denzel Mims had four catches for 42 yards. All are all-conference candidates.

Hill is shutting down receivers and sticking his nose in pileups. “Hollywood,” as he’s known among teammates, is back to full strength.

Bohls: Finally, there are signs of real life coming from the Texas offense

Golden: Texas may or may not be bowl worthy, but the offense definitely isn’t