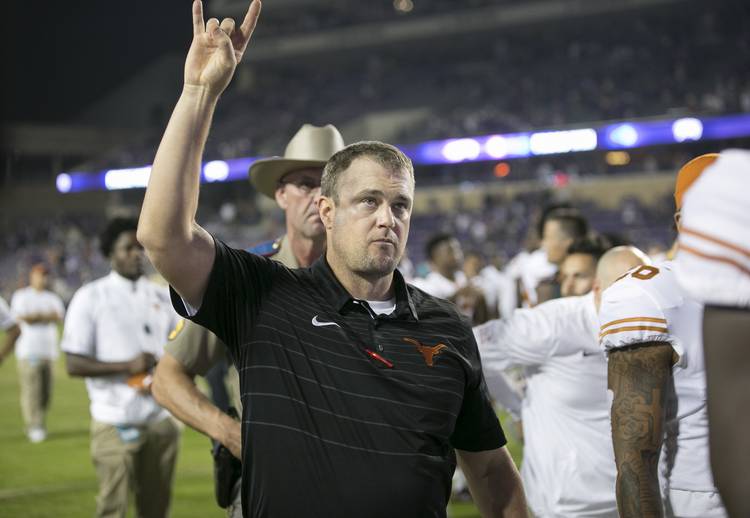 UT head coach Tom Herman pauses for the school song after the loss to TCU at Amon G. Carter Stadium in Fort Worth on Saturday November 4, 2017. JAY JANNER / AMERICAN-STATESMAN

FORT WORTH — Close your eyes and ask yourself this question: Is Texas a bowl team?

If you answered yes, then congratulations, you’re a diehard Longhorns fan and a credit to the burnt orange nation. You’re also extremely nervous going into these last three games because it’s very possible that your team will be home for the holidays for the third straight year.

If you answered no, then there’s no need to update your prescription. The Horns may end up playing a 13th game next month, but it will have to be with a better offense than this group the defense has carried for most of the season.

You’ve all noticed that the Horns have fallen on Depression-era-like hard times on offense. The 31-point win over Baylor was real, but Baylor just got its first win of the season and had to travel all the way to Lawrence, Kan. to get it.

This wasn’t Baylor. Not even close.

Let’s get to the heavy lifting here. Under most circumstances the Horns would need six wins to get to a bowl game. After this loss they sit at 4-5 overall and 3-3 in the Big 12. Barring a second consecutive catastrophic performance against Kansas next Saturday, Texas will need a win in one of its last two games — at West Virginia on Nov. 18 or at home against Texas Tech the day after Thanksgiving.

Tom Herman, offensive guru that he is, stepped off the bus before the game with baseball bat in hand and a giant ring on a chain around his neck that would have made Flava Flav seem conservative. The guess here was that the Horns would swing for the fences and make a statement against a team that has owned this rivalry over the last several years.

The Longhorns stepped to the plate. Swung. And missed.

Two more losses would be the third strike and an offseason without a bowl trip.

Meanwhile, the other locker room was one of smiles and hugs. Nothing gives TCU coach Gary Patterson more pleasure than laying an “L” on Texas and he was border-line giddy.

“They’re the standard,” Patterson said in his post-game press conference.

“Aw, I don’t know, ” said the Little General. “I’m talking about the perception in everybody else’s eyes.”

The offense wasn’t stuck in park Saturday because it couldn’t even find the lot. Aside from a beautiful 33-yard scoring toss from Shane Buechele to Collin Johnson, it was a day for the TCU defense.

How bad was it in the second half? Well, the Horns had the ball eight times and totaled 78 yards of offense, which included a grand total of minus-5 yards rushing on 12 carries. Buechele was sacked seven times and that doesn’t count the other times he was blasted while throwing or scrambling.

Beyond that, what we’re looking at is a group that just doesn’t have the consistent gear to string together wins in what has long been an offensive conference.  Herman was right when he said it was a matchup of the Big 12’s two best defenses, but the difference was the Horned Frogs had enough offense to walk out with their fourth straight win over Texas, increasing their four-year scoring advantage to 153-33 (not a misprint).

Texas visited TCU territory only once in the final quarter. The offensive players have talked all season about shooting themselves in the foot but based on the countless number of misfires we witnessed, those feet are pretty safe.

An educated guess: Texas will roll Kansas and we will hear players talking about how great practice went and how their preparation allowed them to avenge what rivals the 66-3 no-show against UCLA as  the most embarrassing loss in school history.

Then it will be time to find out if this is  a bowl team.

“I’m very confident,” said linebacker Malik Jefferson. “It’s going to be very important that we practice the way we’ve been practicing and keep the same mentality to get to a bowl game. If we keep playing defense that way, we will find a way to gut out a couple of wins here.”

But if the offense continues at this rate against quality competition, guts is all that will be left of this season.