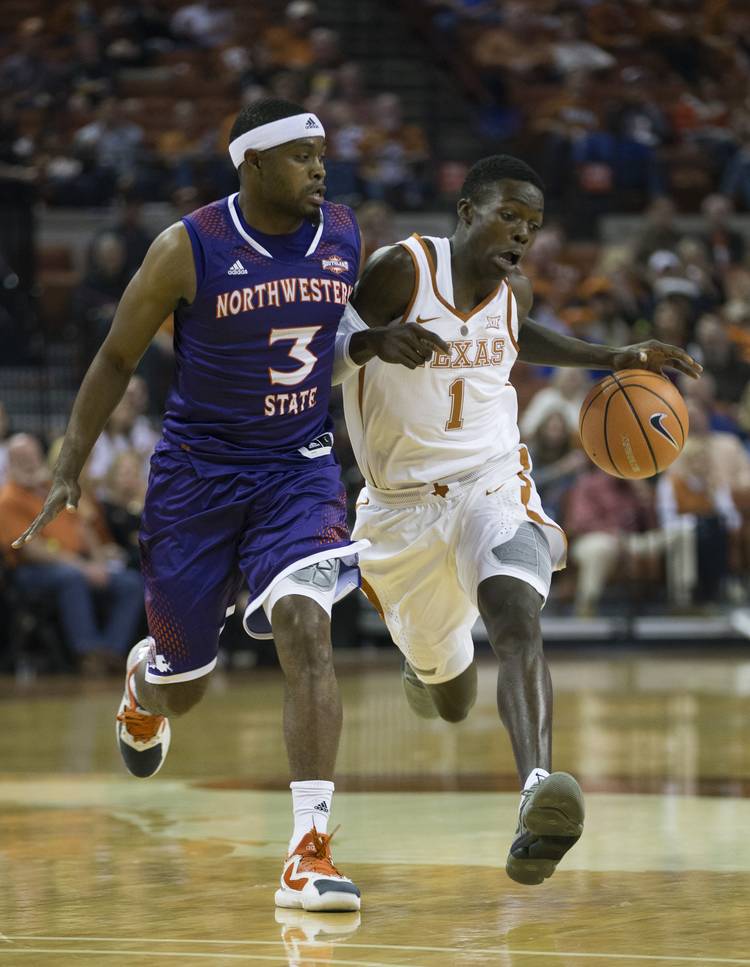 Actually the Jayhawks will be here four days after Christmas, so it’s closer than you think.

Don’t look now, but for the first time in what seems like forever — Texas has lost seven straight to KU — the outcome won’t be a foregone conclusion.

Why, you ask? It’s because the 2018 Texas Longhorns are a different team with a different dynamic with tons more talent than the previous group, which posted a measly 11 wins last season.

Plus they’re (gulp) easy on the basketball eyes, as in fun to watch.

“We’re coming out and our message is we have something to prove,” said freshman centerpiece Mo Bamba. “Last year wasn’t the greatest year for us, and I’m saying that because I was a part of that too, so we’re coming out. We’re letting our playing do the talking.”

Shaka Smart has the ability to go nine-deep now. Andrew Jones is maturing. Eric Davis is coming off the bench along with freshman knockdown shooter Jase Febres and big bodies Jericho Sims and Royce Hamm. The biggest question will be if he can meld all of this talent into one cohesive unit as the season progresses.

“Depth can be a really good advantage for us,” Smart said. “It can be a positive if we have some guys that are willing to play roles and come in the game and play their butts off in terms of effort, knowing that we’ve got other guys coming in for them.”

Remember that brutal 11-22 finish of last season? If things fall right and the Horns continue to build upon what we’ve witnessed so far, they could equal those 11 wins before the Jayhawks roll in here for that Friday night matchup to end the calendar year. Now, granted, the Horns beat up on an undersized Demon squad that was playing five freshmen and a pair of juco transfers, so let’s not get ahead of ourselves after witnessing what Demons’ coach Mike McConathy called a “good old-fashioned country butt-kicking.”

It was, and Texas figures to have similar success against New Hampshire and Lipscomb before an early acid test against Butler and possibly Duke on Thanksgiving weekend in Portland.

The Horns weren’t tested in this one. They scored 62 points in the first half. They didn’t reach 60 in a full game seven times last season. Jones was electric in the open court. Osetkowski looked right at home as a facilitator in his first game.

Then there was the man in the middle.

Bamba isn’t quite Shaquille O’Neal from his LSU days, but it’s really easy to make the man-among-boys correlation when it comes to the near-7-footer. His first collegiate points came on a throwdown in traffic en route to 15 points, eight rebounds and four blocks over 23 tidy minutes. He has several moves in his repertoire already and will eventually grow into that long frame, which will make him a real problem on the next level. For the five months that he will spend in Austin, he provides a significant upgrade over any big who’s played here over the last decade or so.

“He’s still so far from where he can be as a player,” Smart said. “We won’t see the best version of Mo here. That’s way down the line. We saw a precursor here.”

Bamba and the other additions represent a great opportunity for Smart. While coaching and effort are important at this level, talent is arguably the deciding factor in most games, and Smart has plenty at his disposal. We’ll see if that all-important 3-point shooting develops. It’s been a bugaboo for quite some time now.

That said, he has more toys at his disposal than he ever has in Austin. Players like Davis and Kerwin Roach, who weren’t quite ready to shoulder so much of the offensive load as sophomores, won’t be asked to do as much this season because of those three newcomers and the much-improved Jones, who scored 14 and played as if he had something to prove to those NBA scouts who believed he was better off putting of the NBA for another year.

The new-look Horns are young, deep and confident. But will they be Kansas good?

For the first time in a long time, it will be fun finding out.

Bohls: Bowl game for Texas would be a (modest) improvement