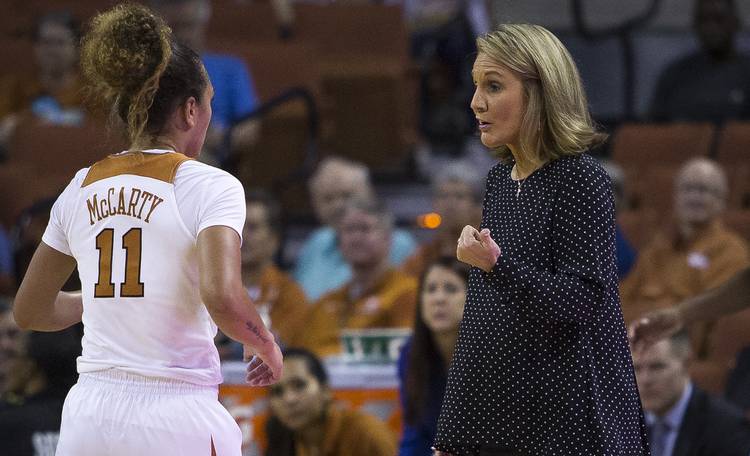 Coach Karen Aston isn’t sure her Texas Longhorns are completely deserving of their lofty preseason ranking but nothing they did in the opener will discourage the voters.

So why not just skip all the pleasantries and pencil in the nation’s second-ranked team for the Women’s Final Four in Columbus right now?

If only it were that easy.

The Horns put up fat scoring totals — five players finished in double digits — but Aston, in true Aston fashion, was looking at other areas that will need to be cleaned up moving forward if Texas is to meet those lofty preseason expectations.

The biggest? Defense and rebounding. And that starts in the lane where Texas is missing suspended 6-foot-3 inch sophomore forward Joyner Holmes, who led the team in rebounding last season at 8.2 per game and the graduated Kelsey Lang who averaged 7.6. Now the Horns have plenty of firepower offensively but there were moments Sunday when the bigs were caught flat-footed on the other end. That’s to be expected with young players and Aston has several inside.

“Maybe we’ve just spent a lot of time breaking down offense and working on being better offensively and I think we are,” Aston said. “Don’t get me wrong, I think there’s benefit for that but I do think we have to catch up defensively, particularly in the paint. We don’t do our work early. We let them have the ball and then we guard them after they get it. There’s just a lot we’ve got to clean up on the defensive end.”

While they wait for Holmes to return sometime this winter, players like Jatarie White, Rellah Boothe, Khaléann Caron-Goudreauand and the improved Olamide Aborowa will have to provide some needed help to Audrey-Ann-Caron-Goudreau, who is stepping into a starting role.

“With (Lang) not being here and us being a little smaller,” Audrey-Ann-Caron-Goudreau said, “we need to focus on boxing out and putting a body on our opponents each possession.”

Want to know the true meaning of progress? It’s when you win your opener by 36 points and the postgame talk isn’t about how you blew out the opposition, but about what needs to happen for improvement to take place. Aston is taking this program places and with a roster of 10 McDonald’s All-Americans, there is plenty of talent at her disposal. With that talent comes a certain degree of expectations and that’s something Aston embraces both as a compliment and a responsibility.

“We scored a lot of points and that’s good, but I believe in getting better,” she said.

Note to the big girls inside: you will end up in a cozy seat next to Aston and assistants Tina Thompson, Jamie Carey, and George Washington if you don’t give it all on the defensive end. It’s non-negotiable. Sell out or sit out.

She will be the first to say her team has plenty of offensive punch. Reigning Big 12 player of the year Brooke McCarty will make several dozen more three-pointers to go with the two she hit in the opener. Ariel Atkins is the best all-around player on this team and enjoyed a healthy offseason playing internationally. She will average 15 to 18 points a game this season but Aston is happier to see those six assists and four steals she put up.

Then there’s the lightning fast LaShann Higgs, who was the offensive star with 18 points on 7-of-9 shooting. Add in Sug Sutton and Texas will be one tough out. But Karen will demand more from her talented newbies. While senior Audrey-Ann was solid in relief of Lang last season and understands the demands that will come with her new responsibility, White showed a willingness to hit the boards with nine rebounds. Boothe will eventually get there but both will have to show their coach they’re thirsty for minutes and that will come with hard-hat intensity on defense.

“They’re bigs obviously jump out at you,” said Stetson coach Lynn Bria. “What jumps out at you most is when they substitute, they don’t lose a whole lot. It’s not like it drops. They still stay at a high level.”

Here’s one thing we know about the No. 2 team in the country. It will be tested. In addition to a pair of matchups with No. 3 Baylor, the Horns entertain top-ranked UConn on Jan. 15.

They will have plenty of chances to defend that ranking and Aston will make sure it will start with defending, period.

Bohls: As football limps along at .500, it’s been a solid fall for Texas’ other programs