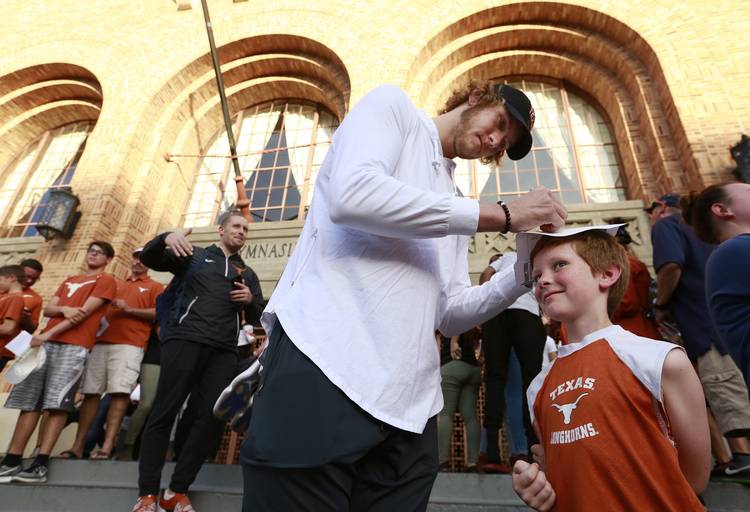 By now, he’s already heard it all.

But the rugged junior forward for the Texas basketball team figures he’s going to hear plenty more, too.

That’s OK. Tulane transfer Dylan Osetkowski’s already become a crowd favorite at the Erwin Center just two games into his Longhorns career in which he’s had a pair of double-doubles, but he knows being the crowd heavy on road trips will come with that territory. He’s been called everything from “Thor” to “Lumberjack.” Even former UT coed “Farrah Fawcett” recently for their comparable long, curly blonde locks.

As his brother, Cory Osetkowski, said Wednesday, “I guess there are no barbers in Texas.”

None that Dylan has found. But then, he relishes playing the role of villain.

“I know I will,” he said. “It was that way at Tulane. Nobody really liked me on the road. They’d talk about my mom, talk about me. Whatever. If I can get in people’s heads, that works in my favor.”

But Osetkowski will be noticed. Finally.

He’s been craving the big stage for as long as he can remember, even before his older, bigger brother would bust his chops in big-brother rough-housing that often went too far. All’s fair in love and brother warfare.

“I wouldn’t say I beat him up,” said Cory, who hopes to enroll at Texas for his master’s degree. “It may have demoralized him, but it toughened him up. I think he was always under-appreciated. But he’s always had a great basketball IQ.”

Osetkowski was a literal unknown at JSierra Catholic in San Diego. College coaches didn’t exactly flock there to see him. In fact, he and his mother spent many a weekend emailing every coach from Coach K to Coach Hey, with a video link to boot.

Tulane wasn’t just the only Division I program to offer this 6-9, 245-pound baby giant, but the only basketball program of any kind. And so Osetkowski trudged from the climate-controlled cocoon of Southern California to the steamy climes of New Orleans.

They weren’t exactly a match from day one.

“The whole city was different from what I was used to,” he said. “Not to diss the weather there or anything, but I arrived and from the time I left the airport and got out of my Uber car, I was already sweating.”

After starting just four games as a freshman and wondering about his next destination, he stuck it out and blossomed his sophomore season, drawing lots of interest. Once he announced he was leaving, Texas assistant coach Mike Morrell was the first to call.

They arranged a visit, he fell in love with Austin and coach Shaka Smart and his staff, and he canceled his next trip to Arizona. Others who expressed interest — Oklahoma, Baylor, Marquette and Maryland — were out of luck. He’d found his new home.

Not that there weren’t some dark moments. For the first two months after the Orange-White exhibition in his sit-out season, Osetkowski was beset with doubts. “I was not right mentally,” he said. “But the whole staff, all the managers, everybody got me through it.”

He persevered and is already starting to produce. On Tuesday, he scored 17 points and gobbled up 14 rebounds, 13 of them on the defensive end. He hit a three for the second time in as many games but took four behind the line.

That’s just part of the skill set this Draymond Green wannabe brings to the table. In fact, ever since Smart labeled Osetkowski a poor man’s Green, Osetkowski clipped a picture of Green flexing in front of LeBron James during the NBA Finals inside his locker.

With him and center Mo Bamba, who sat out Tuesday’s win over New Hampshire with a concussion, Texas has one of the most versatile frontcourt tandems in the Big 12, a dynamic pair that can bang with the best of them, handle the ball and shoot facing up or with their backs to the basket.

“Dylan’s obviously much better than I was,” said Cory, who made his own name playing in more games for Columbia than any player in school history. “It’s awesome to see how much he’s improved. I don’t think there’s any limit to his game. People have said he’s not athletic enough and isn’t vertical enough, but his skill set and versatility are very rare for a big. And he’s always played with a chip on his shoulder, wanting to prove everybody wrong.”

He’s a big-time player on a collision with big-time basketball. Sometimes he tries too hard. Like that behind-the-back pass Tuesday that didn’t go as planned.

“Yeah,” Smart said, “I actually told him in the huddle, that’s enough Larry Bird for the night. Just keep it vanilla right now.”

Larry Bird. Yep, Dylan’s going to get called all kind of names this season. And that’s just fine with him.

Bohls: As football limps along at .500, it’s been a solid fall for Texas’ other programs