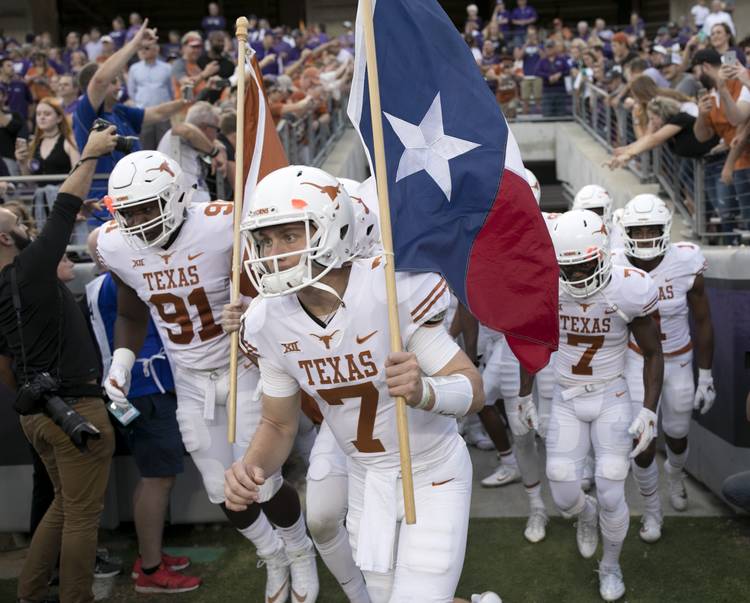 UT quarterback Shane Buechele (7) carries the Texas Flag as the Longhorns enter the field against TCU at Amon G. Carter Stadium in Fort Worth on Saturday November 4, 2017. JAY JANNER / AMERICAN-STATESMAN

Want to know the surest sign of despair for Texas football over the last four years?

It’s when the coaches and players start talking about getting the seniors to a bowl game.

That used to happen after six or seven games. These days the Longhorns have made it a habit of going down to the wire. That’s what happens to mediocre teams. They hover around .500 and hope for that little piece of success at the end to get everyone excited about the next season.

Tom Herman never thought it would be this difficult, but this is his challenge: Win one of these last two games, qualify for a bowl game and work the underclassmen until their wheels fall off from the extra practices.

Mountaineer Field at Milan Puskar Stadium ranks with Lubbock’s Jones AT&T Stadium as one of the Big 12’s toughest venues, not just because they pack 60,000 fans in on the regular but because West Virginia has always been a quality ballclub and one tough out at the house.

John Denver’s 1971 song rang down from the stands on Nov. 14, 2015 as the Longhorns, who had just taken a sound 38-20 beating, walked slowly to the visitor’s locker room. The party was just beginning in Morgantown, 60,000 strong, singing the official state song.

Texas defensive end Breckyn Hager, who was a freshman that year, turned Twitter on its ear Tuesday night after I asked him why Milan Puskar Stadium is such a tough venue for visiting teams.

“Because it’s a bunch of hillbillies drinking moonshine,” Hager said.

Nothing wrong with being a hillbilly. Just ask West Virginia coach Dana Holgorsen.

“You’re darn right I’m a hillbilly,” Holgorsen shot back on this week’s “On Second Thought” podcast. “I can’t own property and a big house in the hills of West Virginia without considering myself a hillbilly. You can’t expect me to answer the other question because that would be illegal. I have seen a lot of hillbillies that are out there in the tailgates that happen to be drinking something in clear bottles. Not quite sure what that is.”

You can best believe they’ll be drinking in pure happiness if the Longhorns (5-5, 4-3 Big 12) fail this latest road gut check, which would put all the pressure on them to beat Texas Tech next week on Black Friday to make it to a bowl game.

While Hager may get a few tweets directed at him from Mountaineers fans — his Twitter mentions ranged from good-natured to funny to the unmentionable — his 5-5 team is still out to beat a really good team at its best on the road.

In my opinion, that would be a first for this season; Iowa State was a good win, but the Cyclones were playing the wrong quarterback and hadn’t yet morphed into the team that would go on to knock off Oklahoma and TCU.

Texas’ close losses away from home to USC, Oklahoma and Oklahoma State were just that. Losses. The Longhorns’ seniors will leave here with a 24-26 road record at best, which is far beneath the standards left by the legendary Mack Brown. A victory over a seven-win team, albeit a CFP-unranked 7-3 one, would go down under the “quality” heading and take its place as the biggest win so far at Texas for Tom Herman.

“Well, we’ve got to win one that we’re not supposed to,” Herman said this week. “I think right now, save for the very first game (a 51-41 loss to Maryland), we’ve won the ones that we’re supposed to and we haven’t the ones that people said we weren’t supposed to. So I think that’s got to be the next step.”

The players we spoke to this week were thankful for the 11 a.m. kickoff. We’ve all witnessed enough Saturday night games in Lubbock to understand the importance of sunshine in a Big 12 beehive, though there is a 90 percent chance of rain on Saturday with some snow possible.

This senior group hasn’t been the most clutch on the road. West Virginia isn’t ranked but that offense is good enough to play with anybody, especially at home. The urgency is there to beat a quality ballclub.

“We know that this next game is our bowl game,” cornerback Antwuan Davis said. “We’re not going to shy away from that. We know what we need to get done. Ultimately, it’s what we’re going for.”

It’s a nice road test. One I don’t expect them to pass.

Bohls: Texas’ Dylan Osetkowski is making a name — or names — for himself

Bohls: Texas’ defense, running game are planting the seeds for the future