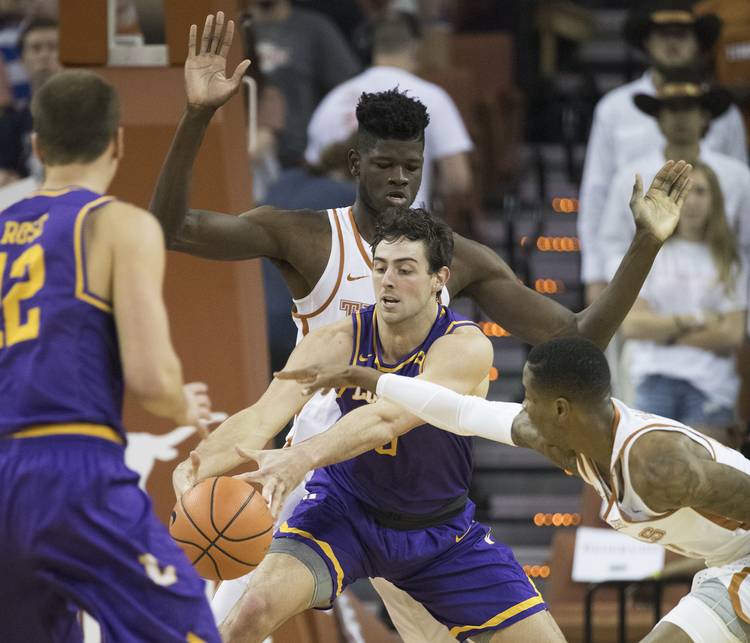 Those pesky rims remain a challenge from distance.

With apologies to the dude who did some really cool tricks on his bicycle, the most eye-opening part of Saturday’s 80-57 win over Lipscomb was Airship Rudy — the omnipresent inflatable dirigible that has dropped finger-lickin’ coupons onto the domes of suspecting and unsuspecting Club Erwin patrons for the better part of a decade — making an emergency landing behind the visitors’ bench at halftime.

As for the 3-0 Longhorns, they’re one saucy group to watch whenever they decide to “pour it on,” and Lipscomb crumbled beneath the weight of Texas’ overwhelming size and athleticism. The Horns forced 17 turnovers and held their opponent to 2-of-23 shooting from 3-point range.

When asked to explain the unusual number of giveaways and misses from downtown, Lipscomb coach Casey Alexander said, “It was their defense.”

Defensive stalwarts notwithstanding, Texas’ outside shooting still needs to improve by leaps and bounds if this team is to reach five-star status on an NCAA basketball level, or better yet, get a mention in one of those cool Matthew Odam reviews.

The Horns made only 3 of 16 3-pointers, and one of them came from big man Mo Bamba, who knocked one down in the second half from the top of the key. The other bricks didn’t pose a problem on a relatively stress-free Sunday, but they just might when Texas ventures to Portland to play Butler and possibly top-ranked Duke after that. The Blue Devils are shooting .385 from distance while Texas, which has made 20 of 73 from behind the arc, is shooting .273. In case you’re wondering, Duke player of the year candidate Grayson Allen has knocked down 17 3-pointers over his last three games, three fewer than the Texas team has made through three games.

Smart said the 3s went in during the exhibition season and in practice but the makes haven’t translated to game night just yet.

“I don’t think it’s panic time by any stretch of the imagination,” he said. “Teams are going to give those guys extra attention, not just the post players but on drives to the basket.”

“We just have to stay in the gym,” said Kerwin Roach, who had one of his best all-around games with 16 points and some stellar defense on Lipscomb’s leading scorer Garrison Mathews. “That’s the only remedy, to get in the gym and get some shots up.”

Here’s the good news. This time last year, Shaka Smart had several issues going on with this team, from locker room chemistry to the lack of a true point guard to the lack of quality outside shooting.

Spin ahead a year, and the Horns seem to be a unified group in the early going, and why wouldn’t they be with a weapon like Bamba on the roster? With the 6-foot-11 freshman taking up residence in the lane for the next five months before he becomes a millionaire, Shaka had no preseason concerns with interior dominance on both ends of the court.

Bamba, back from a concussion that sidelined him for one game, was silky smooth on one end and fly-swatter stingy on the other Sunday. He finished with a 13 points, 10 rebounds and five of the team’s eight blocks.

In addition, freshman Matt Coleman has been at the point and Dylan Osetkowski has been a great facilitator from the point forward position. As far as the outside shooting is concerned, Smart brought in Jase Febres to help with that area, and junior Eric Davis had a good offseason knocking down shots, according to his head coach.

Smart is hoping the results will start to show as his team takes its act on the road. In short, the Horns need more swishes and fewer misses. There were several wide-open opportunities from behind the money line Sunday, but only three found the mark. As the weeks go by, don’t be surprised to see those opportunities present themselves in abundance as defenses will pack in the middle, double-team Bamba and dare the Horns to fire away at will.

Maybe the makes will come when Smart cuts down on his rotation to allow his core group t0 play more minutes. From these eyes, there’s enough talent on this roster where a 3-point shooter will eventually emerge.

Smart would prefer that guy emerge soon. Like now.

Bohls: Texas’ defense, running game are planting the seeds for the future

Bohls: Michael Dickson has made a Texas career of making fourth down fantastic