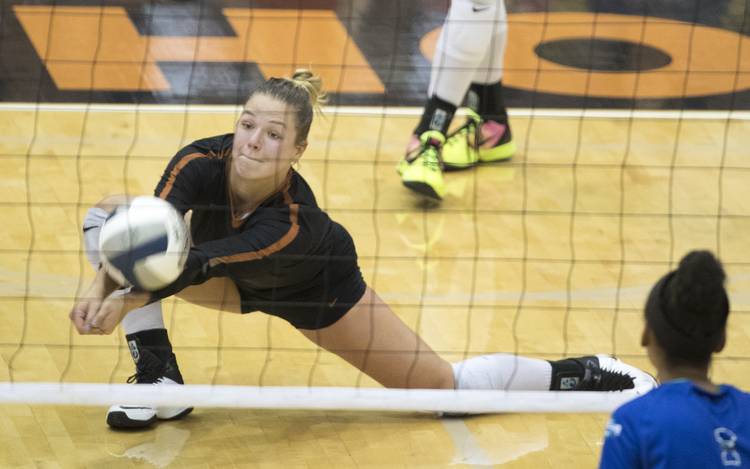 Texas (8) Cat McCoy digs the ball out against Corpus Christi during the during the volleyball game at Gregory Gym on September 7, 2017. RICARDO B. BRAZZIELL / AMERICAN-STATESMAN

Actually, this 21-year-old native Texan craves the adrenalin rush and exciting opportunities that it provides.

Which is why she’s jumped off dangerous Austin cliffs with a teammate.

And why she joined teammate Ebony Nwanebu and about two dozen other fellow Longhorns on a mission trip to earthquake-ravaged Haiti last May.

And it’s why she interned for a non-profit, local, startup company.

And why she’ll graduate from Texas in December with a degree in public relations and then try her hand at beach volleyball at the University of Washington where she hopes to get a master’s degree in sports management.

“Yeah, I’m a very adventurous person,” admitted the effervescent senior libero for the second-ranked Longhorn volleyball team, who puts the up in upbeat. “I like exploring.”

It doesn’t matter whether it’s discovering new places along the greenbelt or hot eateries on the Austin restaurant circuit, she’s on the move. Heck, she and former Texas soccer player Lindsey Meyer plan to take off to Europe for three weeks next spring and tour London, Paris, Barcelona, Rome and Munich. She won’t let grass grow under her feet, but then she’s rarely on her feet as the Longhorn whose chief duty is risking life, limb and whatever else she can hurt on an unforgiving volleyball court.

“I was always one of the shortest players on my teams,” McCoy said, “but I was really quick and feisty.”

Feisty is mandatory for short. But she is long on desire and tenacity.

She’s become good-naturedly accustomed to the short jokes and the tendency for strangers to be skeptical about her place amidst the tall trees of Jerritt Elliott’s volleyball team, which plays its regular-season finale at Baylor on Saturday before embarking on its own adventure in search of another national title.

“I’m 5-8, which isn’t that short,” McCoy said. “In public, when someone asks me how tall I am, I feel really bad when they say, ‘You don’t look like a volleyball player.’ “

But she plays like one and has been one since she started playing in rec leagues at age 7. She’s played the unglamorous libero role from the time she turned 11. Still, she averages 4.45 digs a game, the highest mark in school history. She broke the all-time record owned by Demetria Sance, which isn’t too shabby since Sance is one of only eight four-time All-Americans in the history of the sport and in the Longhorn Hall of Honor.

On the decisive point to beat Florida in the fifth set and advance to the Final Four.

“Cat McCoy has become a very steady stream of consistency in every aspect of her game,” Elliott said. “For her to have that consistency is where her growth really expanded.”

She’s been starting for four seasons and didn’t have her best a year ago, but is playing so much better now because she said she’s happier.

“You have to be mentally tough and also calm because you’re the leader of the backcourt,” said McCoy, who’s sprained her right ankle three times and left one once. “You’ve got to be relentless. I love my position. Tall girls don’t like to hit the floor.”

Libero is hardly the most coveted or high-profile spot on any volleyball team. She’s the player tasked with doing all the dirty work with less acclaim, but with more floor burns. She has to sprawl herself on the Gregory Gym court to prevent the ball from hitting the floor time after time to keep the play alive so someone else can get the glory, which is fine by her.

A libero in volleyball is not unlike the setup man for the closer in baseball. Or even worse, a middle reliever. More thankless job than anything.

“It’s like playing linebacker in football,” McCoy said. “You have to do a ton of dirty work. You’re making a lot of good plays, but you’re not scoring touchdowns.”

She’d know. She was quarterback on her high school powder puff football team at Southlake Carroll. Was she any good?

“We won,” she said bluntly.

She does look up to her teammates. Quite literally since teammates like outside hitters 6-4 Nwanebu and 6-2 Lexi Sun and middle blocker 6-2 Chiaka Ogbogu tower over her. Of course, who doesn’t? She doesn’t mind. She recognizes her value to the team, and so do they.

“She’s just crazy,” fellow senior Nwanebu said. “Can I use the term ‘greaseball’? She sweats a lot. She’s great. I mean, I’ve seen her crash into the bleachers going after a ball.”

McCoy and Nwanebu clearly have an affinity for one other on a close-knit team and like to poke at each other to get a rise from them. The two have bonded during their years in Austin and spent a week together in Haiti last May with a traveling party of 22 Longhorns that included libero Natalie Gilbert, as well as swimmer Jeremy Nichols and pole vaulters Shay Petty and Calie Spencer. They painted houses, planted trees and handed out fresh water.

“A baby came up to me begging for water,” Nwanebu said. “It’s kind of heart-breaking. Our worst day is their best day.”

The humbling experienced moved and inspired the two of them in ways that continue to ground them.

“Oh, 100 percent,” McCoy said, “because they’re so grateful for everything they have. We take everything we have for granted. It was one of the best experiences of my life.”

Which pretty much sums up McCoy. She won’t be caught short.

Bohls: Michael Dickson has made a Texas career of making fourth down fantastic