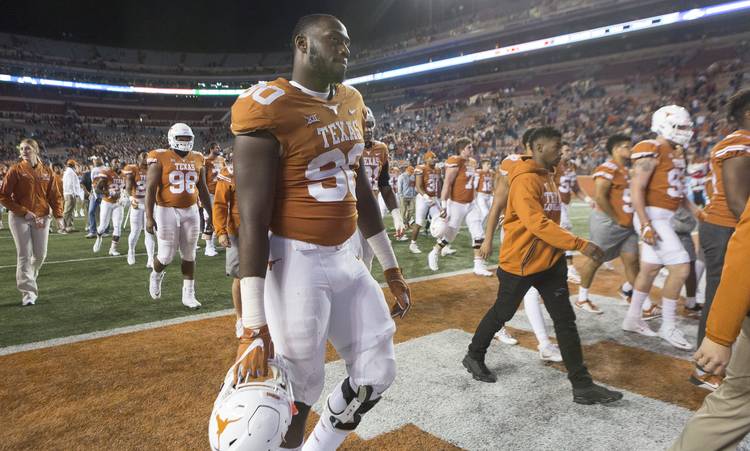 In the final week of practice before his final year at Texas, Darrell Royal, if memory serves, took in what he had seen leading up that 1976 season and made his pronouncement.

“I’d say we’re about as average as every-day wash,” the legendary coach said.

Some three months later, he put the wraps on the best coaching career in this proud school’s history as he coached an injury-wracked, quarterback-crippled Longhorns team that limped home at 5-5-1.

As average as dirty laundry.

History repeated itself on Friday night as the Texas offense gaveth with four second-half turnovers, and Texas Tech taketh away, and the Longhorns trudged off the field in the stadium that bears DKR’s name as an average, 6-6 team.

And no one will be able to wash away the stain of this dreary final home game for a team that inexplicably followed up a dramatic, uplifting road win over ranked West Virginia with a deflating, improbable 27-23 home loss to a 5-6 Texas Tech and a quarterback making his first major college start.

And so ended a most irregular regular season.

The culprit was a familiar one. Texas erred its dirty laundry once again, and nothing has been dirtier than a sporadic, sputtering offense that’s so ugly to watch. That offense with the poor play-calling and poorer execution will be the one phase that head coach Tom Herman must fix if he is to avoid a similar fate as his predecessor.

On this night, the familiar lack of a potent running game killed Texas in two series perched on the Texas Tech 1-yard line and forced momentum-crushing, first-half field goals. How could Texas not score in six tries? “They stopped us,” Herman said brusquely.

The inexperience of freshman quarterback Sam Ehlinger, a challenged passer who has trouble seeing the field and finding open receivers on time, resulted in two big-time interceptions on the Longhorns’ last two possessions. One set up the Red Raiders’ winning touchdown pass in the game’s final 107 seconds. The other doomed Texas at the end.

“Hats off to Coach (Kliff) Kingsbury,” Tom Herman said. “But we’ve got to do a better job.”

Amen to that. Whether it’s making staff changes with offensive coordinator Tim Beck (unlikely, but maybe not unnecessary), allowing for natural maturity at key spots like quarterback, tailback and offensive line (probable) or developing players better or recruiting better players (mandatory), Herman’s agenda has to start with fixing a broken offense.

The Longhorns opened and closed the first year of the Herman era with bizarre, bookend defeats, a puzzling 51-41 loss to a Maryland team that finishes its 4-7 season Saturday and a distressing 27-23 loss to a Texas Tech team that will finish eighth in the Big 12.

In between were a very noticeable series of highs like beating the Mountaineers and Cyclones and taking highly ranked teams like USC, Oklahoma and Oklahoma State to the very limit, but also lows like an unconvincing home win over dreadful Kansas and a bleak loss to the Red Raiders. The passion is there. Texas played hard all year, but not very smart and with not near enough imagination.

Oh, there will be an extra game in either the Camping World Bowl, Texas Bowl or Liberty Bowl to either salve Texas’ wounds or sentence it to a losing record, not unlike Charlie Strong’s first 6-7 season.

“It sucks to lose, and that’s never going to change,” Ehlinger said. “We had a lot of close games that we should have won. And there’s a lot of W’s in the future for this program.”

This team looked so much better than nearly all of Strong’s teams, but also has many of the same problems like an anemic offense, inconsistent quarterback play and poor special teams although kicker Joshua Rowland redeemed himself after a 7-of-14 showing with three good field goals Friday and punter Michael Dickson continues to send balls into the stratosphere.

That said, for many of the 100,629 fans on hand, Texas appeared to be right square back where it started. And the criticism will focus on the offense.

Count seven three-and-outs for an offense that tested its own outstanding defense over and over. Some of it was self-induced, none bigger than a pass call on third-and-2 when Texas could have iced the game with a short run for a first down or punted Tech deep in its own territory. The interception was returned 55 yards to set up Tech’s winning score.

Herman inserted his better passer for one single series, on the third possession of the game, and never went back to Shane Buechele again although he said the thought crossed his mind.

Ehlinger connected with the largely forgotten Armanti Foreman for a 27-yard touchdown on the fourth play of the game, but didn’t throw another pass to one of his best receivers until the final minute of the third quarter. Why? “Just a normal bench rotation,” Herman explained.

As for his offense moving forward, Herman conceded it’s hard to evaluate because “you still don’t know who the key pieces of this offense are currently.”

Maybe it will all come out in the wash.

Bohls: A sterner Shaka Smart is driving his Texas men harder — and they need it