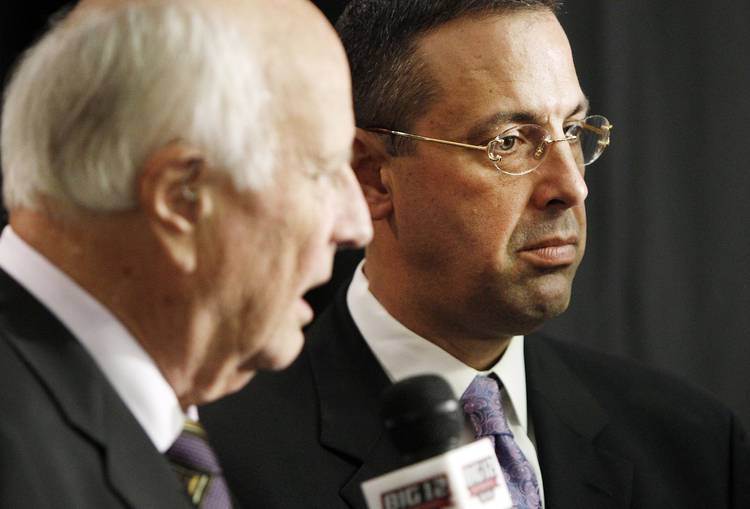 Why, with a little better call on third-and-2 on the field or a timely free throw on the basketball court, Texas might even be showing signs of becoming Texas again.

Del Conte will soon be the talk of the nation. And for a guy who’s never met a notepad he couldn’t fill with colorful, relevant quotes, he’ll feel right at home in the state’s capital. He does like to talk, so much so that I once kiddingly dubbed him in print the Circus Barker, a tag he still needles me about.

His sudden hiring signals a major change for Longhorns athletics. Texas has a bold, articulate figure who can speak out on national and Big 12 issues in the future and lead the athletic department back into prominence. Someone said it all starts at the top. Probably a famous barber. Del Conte even looks the part.

Del Conte is driven to succeed. But it’s obvious by the fact he was a sociology major at UC-Santa Barbara that he’s not motivated by economics.

“I have a sign in my office that says ‘God’s gift to me is my potential,’” Del Conte told me Saturday, “and my gift to Him is what I do with that potential.’ “

That’s why he knew he had to accept Texas’ offer.

He could have won more than he has already at TCU, but Texas represented “the ultimate opportunity” and a challenge he just couldn’t refuse. It’s not unlike 1998 when a young, ascending football coach at North Carolina was winning big and very comfortable in Chapel Hill but understood he couldn’t say no to the place where Darrell Royal once walked. So Mack Brown said yes two decades ago, and so did Del Conte on Saturday.

“We all have one rodeo,” Del Conte said, “and I want to look back after it’s over and know I gave it my all.”

Del Conte and Fenves should make a terrific match. Neither is scared to take strong stands as we’ve seen Fenves go from a perceived technocrat to a confident decision-maker who will remove Confederate statues from campus or accompany a football coach to make a position hire.

He made then-athletic director Mike Perrin wait until his fund-raising trip to China before he would sign off on the hiring of baseball coach David Pierce. He hired Tom Herman just hours after pink-slipping Charlie Strong, ironically after a loss to TCU, preferring not to let an exhaustive process drag on as it has at, say, Tennessee of late and become a bidding war.

He’s now landed Del Conte without an awkward, unwieldy search that could have dragged out interminably like the hunt for a replacement for Augie Garrido. That said, Longhorn Nation owes Mike Perrin a big thank you for stabilizing the Forty Acres.

You wouldn’t believe how many elite athletic programs tried to pry Del Conte out of Fort Worth. Every time his name came up for bigger, more prestigious jobs, Del Conte quietly and without fanfare declined interest.

He could have comfortably stuck around in Cowtown and enjoyed the fruits of his labors as Gary Patterson and Jim Schlossnagle work their magic in football and baseball. Patterson’s won a Rose Bowl and darn near this year’s Big 12 title. Schlossnagle, one of the brightest coaches in the business, has taken the Horned Frogs to three consecutive College World Series.

Del Conte knows people. And he knows how to work with them, motivate them and keep them happy.

He’s been a man I’ve touted for this Texas job almost from the day that Perrin succeeded the polarizing Steve Patterson more than two years ago. Del Conte’s got all the credentials and all the smarts to do wonders in Austin. And he’ll make for quite a tandem with the university president.

Fenves just might have the hang of this thing as well.

By targeting arguably the best Big 12 administrator in the league — with Oklahoma’s Joe Castiglione very close behind — Fenves went directly after the former track letterman. In doing so, he’s developing quite the track record of his own.

He’s performing admirably as a one-man selection committee instead of plying alums’ egos by appointing them to a search committee as so much window-dressing. He works alone, found a man he respects and is comfortable with and pulled the trigger quickly after visiting up close and personal in New York City during the National Football Foundation festivities this past week.

He’s showing himself capable of doing more than jetting to places like Tulsa to help his previous football coach land an offensive coordinator.

In the last 13 months, Fenves has plucked the hottest coaching commodity available to steer the football team and now has landed one of the smartest and most proactive athletic directors in the country.

Del Conte has hired strong winners, raised millions in capital campaigns, made the necessary facility improvements and kept his coaches happy. Now it’s on to the next challenge. The rodeo ain’t over.

Bohls: A sterner Shaka Smart is driving his Texas men harder — and they need it

Golden: Will these forward-thinking hires move the needle at all on Texas vs. Texas A&M?