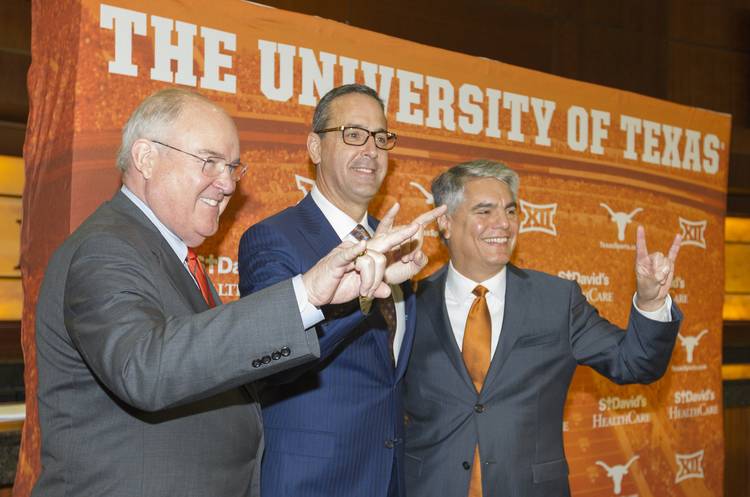 In the span of one week, the state’s two biggest universities made massive athletic hires.

Will that lead to a football showdown before the end of the world?

After Texas A&M landed football coach Jimbo Fisher, Texas President Gregory L. Fenves made the most important hire of his tenure when he lured away the charismatic Chris Del Conte from rival TCU to replace Mike Perrin.

Fenves introduced Del Conte to a media throng Monday and a room full on the ninth floor of Bellmont Hall that included several dozen staff members and the retired DeLoss Dodds and Mack Brown, who played starring roles in the golden era of Texas athletics that spanned from 1998 to 2009.

The 49-year-old Del Conte had plenty of notes ready for the occasion, but he didn’t need them. He spoke from the heart — pausing at times to steady his emotions — and thanked his family and the others who helped him arrive at the doorstep of the biggest challenge of his career.

Then he let us know how he will conduct business.

“My philosophy is simple,” he said. “My job is to support coaches and student-athletes in their endeavors to win championships, period. That is it. I have a reverse pyramid. I am a servant leader. My father taught me three things. My father passed away, but he was a servant leader. Started a children’s home. I was very fortunate to work up in that environment. Be humble, be honest and serve others.”

So besides the return to glory mountain he must lead, let’s get to the elephant in the room: When will the Aggies and Longhorns get busy again? The new boss isn’t ready to tackle that one just yet, but he gets why these two schools knocking heads is great for the college football fabricy. A discussion he had with Brown illuminated that point and gave hope to those of us who would love to see this blood feud receive a much needed transfusion.

“Rivalries in college athletics are so important,” Del Conte said. “The water cooler conversations on Mondays are awesome. I love the Red River shootout, all that goes on with that OU-Texas game. It is fantastic. Those things are what galvanize. When we stayed in the Big 12, it’s because football and regional rivalries are so important to the community. I know that. I know that. It’s important to everybody.”

A quick look at the future schedules reveals both schools have a Power-5 non-conference opponent scheduled for each season through 2024 (the Aggies’ goes through 2025), so it may take a while before Del Conte and A&M counterpart Scott Woodward can discuss a resumption of a rivalry that came to a halt six years ago after Justin Tucker’s 40-yard kick gave Texas a series-ending, last-second win.

For now, Del Conte is charged with getting the Horns back to where they used to be.

A man who grew up in a foster home before working in the maintenance department at Washington State, where he left with $53,000 in student loans and a long-term relationship with Sallie Mae, has already experienced plenty of challenges in life.

“Once you get to know Chris and understand who he is, you can see how his unique upbringing, the values that his parents instilled in him, guides him in everything he does around athletics,” Fenves said.

Translation: He’s ready for this. Take a look at what he has done.

Del Conte’s fingerprints are all over the athletic revival at TCU. Major renovations to the football and basketball facilities came at a cost of over $240 million, money that came from private donations. He’s leaving behind a well-oiled fundraising machine that raised another $32 million in the 2017 fiscal year with more on the way. He also made winning hires and deftly navigated TCU through some not-so-glorious times, including early 2012 when four football players were arrested in a drug bust.

You can’t blame Longhorn Nation for being abuzz about this hire. Del Conte is cut from the DeLoss cloth — competitive to a fault, proud and opinionated with that that little dash of arrogance that leaves no doubt as to who is in charge. His TCU teams closed the gap on Texas when he got there and passed the state’s flagship university in football, baseball, and of late, men’s hoops.

He’s the right man for this job.

Golden: Tommy Nobis may have left us, but the memories of No. 60 on, off the field won’t