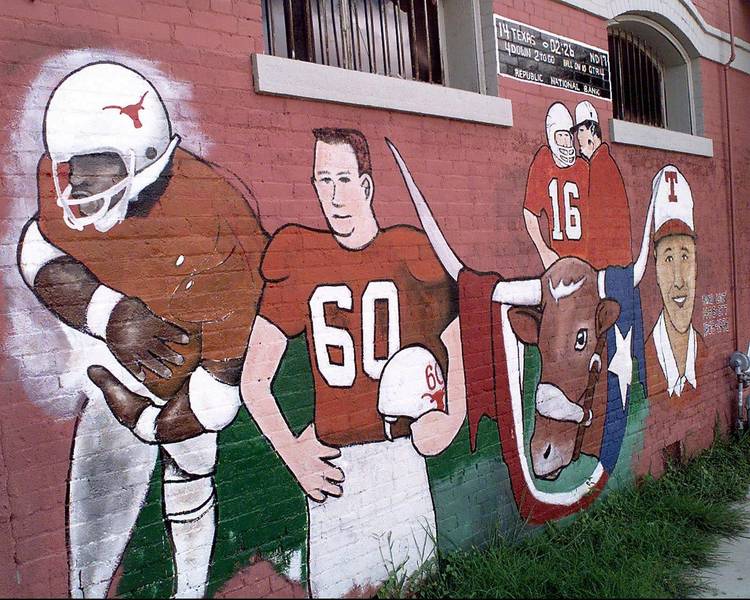 Tommy Nobis, wearing his famous No. 60 jersey, was part of an unfinished mural of Longhorns legends in this 1997 file photograph. The mural was being painted by Henry Gonzalez to grace the Sports Bar on the 1200 block of E. 6th St. Longhorns greats on the wall, from L-R: Earl Campbell, Tommy Nobis, James Street and Darrell Royal, and Cliff Gustafson. Ralph Barrera/AA-S

That number was synonymous with greatness at the University of Texas in the decade of the same.

Tommy Nobis is the gold standard for defensive players on the Forty Acres. Hard-nosed, tough-minded and feared by the opposition, he was the guy that offensive coordinators circled on game film when it came time to play Darrell Royal’s Longhorns.

The only defensive player in school history to have his jersey number retired left us Wednesday at age 74. Nobis passed away in Atlanta, where he played his entire career for the local NFL team. The first-ever pick of the Falcons — he went No. 1 overall in the 1966 draft and was named NFL rookie of the year— appeared in five Pro Bowls and was a consistent presence on teams that finished with winning records only twice in his 11 seasons.

Long before he earned the nickname Mr. Falcon, Nobis was a two-way performer at Texas who made his most noise at linebacker as a two-time All-American and the unofficial embodiment of big-boy football at Texas.

“Coach Royal told me many times that Tommy was one of the best players he had ever coached or seen,” former Texas coach Mack Brown said in a statement. “He was as physically dominant of a linebacker as the game will ever have.”

During his college years, the games between Texas and Arkansas were played in blood-feud fashion and Nobis’ nose was right in the middle of it all. Former Arkansas assistant coach Barry Switzer, who hadn’t heard about Nobis’ passing until I told him in a phone call Wednesday afternoon, recalled Nobis being the fiercest of the Texas players and the one that concerned the coaching staff the most in an era when running the football was tantamount to being successful.

“He was a great linebacker,” Switzer said. “He was the type of player you were looking for, tough and physical. Tommy was a force to be reckoned with on the field, but (what) I remember most about was that he was also a nice guy, a good person in addition to being a special player.”

Upon retirement, Nobis kept his home base in Atlanta but would venture back to Austin before he took ill. The only time I ever met and spoke to him was at the 2009 NFL Alumni Austin Chapter Golf Classic, which was held to benefit local charities. I watched as he and former players like Roosevelt Leaks, Jerry Sisemore and Rayfield Wright exchanged old stories while younger stars like Winfred Tubbs and Brian Jones — the last Texas player to wear 60 full-time — looked on in awe.

Back in 2009, Brown asked Nobis to speak to his team before the Fiesta Bowl game against Ohio State. Motivational speaking wasn’t Nobis’ forté, but he agreed to address the 11-1 Horns who were still getting over being left out of the Big 12 championship game after a last-second loss at Texas Tech created a three-way tie atop the Big 12.

Nobis spoke to the team at the walk-through a day before the game. He told them they still had something to play for even though not being able to play for the conference title pretty much ended their chances of playing for a national title.

“I’ll always remember standing out there, and every Longhorn player listened to him intently,” recalled longtime Texas radio voice Craig Way. “He had been through the same heartache when they had lost to Arkansas in ‘64, 14-13, and they wound up in the Orange Bowl playing Alabama and Joe Namath, who had already been crowned national champions. So they were motivated to win.”

Even in his later years, Nobis still had a presence about him. He’s gone now, but the memories of his great career aren’t going anywhere.

Golden: Will these forward-thinking hires move the needle at all on Texas vs. Texas A&M?

Golden: Mo Bamba should embrace the role of cleaning up the garbage for Texas basketball