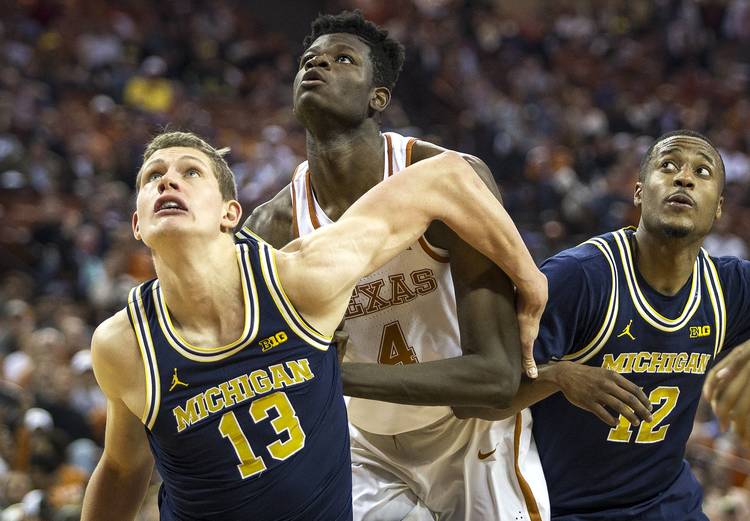 Mo Bamba will be great one day, but it won’t be at Texas.

For now, the Horns could really use his services in a role that’s much needed on offense.

Before you type up that letter to the editor demanding that I be sent to the nearest car wash, be advised that “garbage man” is an endearing term in basketball circles. It’s a role that turned Dennis Rodman into a Hall of Famer. It kept Charles Oakley in pro basketball for more than a decade despite the fact he couldn’t jump over the sports section.

In short, a good garbage man is a team’s junkyard dog that cleans up the glass on both ends of the court and does all the little things that don’t always show up in the boxscore. The freshman already does a little bit of that. He alters shots with his long wing span and causes players to think twice before venturing into the lane.

He also draws double teams that allow teammates to get wide-open jumpers. Whether they knock them down or not, well, that’s another discussion.

Now let’s get one thing clear. Bamba has the potential to become the next Kevin Garnett, but we’re years away from that kind of superstar production. He’s far from a lump of coal, but he has long way to go before he can become the diamond that some NBA scouts envision him to be. Thirty of them were at the Erwin Center to watch him record 10 points, 10 rebounds and four blocks in Tuesday’s 59-52 loss to Michigan.

The upside was evident from a 6-11 forward who’s averaging 10 points and 10 rebounds. He’s also averaging four blocks, the third most per game in the country.

With that said, Texas needs more from him. More activity on offense. More calling for the ball and less standing around. More aggressive forays to the bucket.

At this level, Bamba should average much more than 10 rebounds a game because of sheer talent level and size. He has only 23 offensive rebounds in nine games, and that’s where the garbage man role could take shape.

Imagine if he grabbed two more offensive rebounds per game and put them back in the bucket? He would average 14 points and 12 rebounds, the same numbers that a skinny kid by the name of Shaquille O’Neal averaged his freshman year at LSU before he eventually became a game changer at the center position.

Rebounding is largely a result of effort, and the 225-pound Bamba admittedly is learning how to adjust to the pace of the college game and the sheer bulk of the guys he’s playing against. His development will take time, but that’s the catch-22 facing Texas.

The clock is ticking on Bamba, a projected top-10 pick in several NBA mock drafts. There will come a day when he’s averaging a KG-like 19 points and 10 rebounds per game, but that won’t come in Austin and not even on the next level until he figures out his identity on the offensive end.

Through Bamba’s first eight games, he’s done nothing to discourage the notion that he’s going to be a bona fide star one day, but the current version doesn’t have enough junk in his trunk to hold his position on the box against meatier players.

“I can definitely be more aggressive, get fouled more and throw my body around,” Bamba said. “In the the high school game, you’re not playing 6-10 and 200-whatever pound guys.”

I noticed that he drifted out to the 3-point line three times against Michigan rather than fight for position on the block. He made one and is now 3 of 16 from long distance.

The fact that we can call a player who’s averaging a double-double far from a finished product is a testament of how great he can be. A couple of missed threes won’t cripple Texas, but if they’re taken at the expense of a putback or dunk, Shaka will have to address it.

Right now Bamba is fourth on the team in scoring behind Andrew Jones, Dylan Osetkowski and Kerwin Roach II. This time next month, expect him to be much better. He needs more reps down low. With that added experience will come a comfort zone that will coincide with an increase in his numbers.

The improvement will come. For now, Bamba should just concentrate on taking out the trash.

Golden: Tommy Nobis may have left us, but the memories of No. 60 on, off the field won’t

Golden: Jericho Sims finding his way in the paint for Longhorns