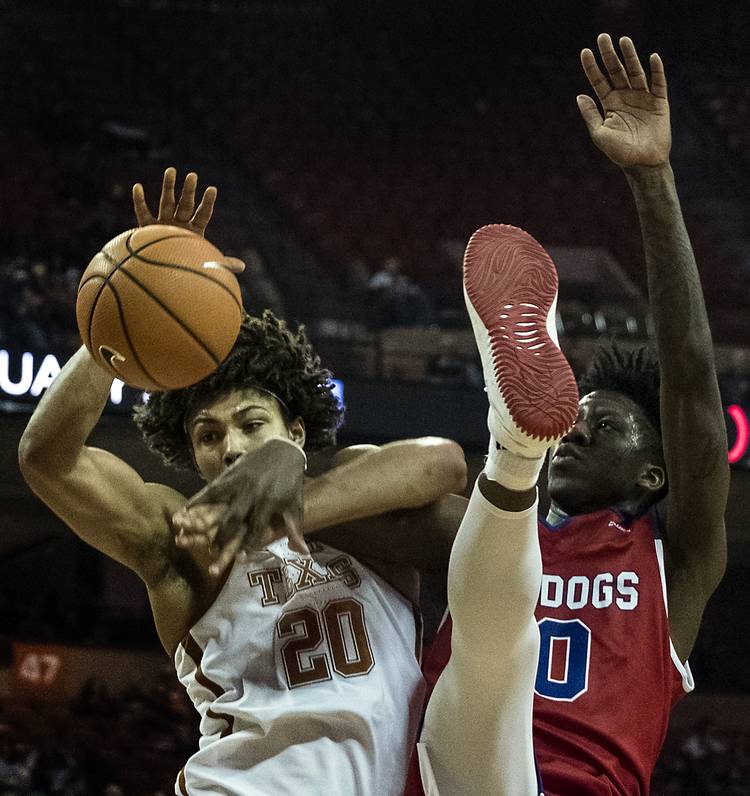 Texas' Jericho Sims and Louisiana Tech's Anthony Duruji battle for a rebound during the second half of the Longhorns' 75-60 victory Saturday. (AUSTIN AMERICAN-STATESMAN Photo/Rodolfo Gonzalez)

There will be times when Texas’ Mo Bamba won’t be able to play because of foul trouble.

Freshman forward Jericho Sims showed Saturday that he just might be a suitable replacement in a pinch.

His job is to bang on both ends, get rebounds and add a couple of buckets in the paint when his number is called. He isn’t a 6-foot-11 condor who has the NBA scouts drooling, but he is a 6-9 athlete who can have an impact on a game in stretches.

With Bamba saddled with fouls for most of the day Saturday, Sims played arguably his most complete game in the 75-60 win over Louisiana Tech. He had nine points and eight rebounds, both season highs, plus a block in 20 minutes, a stat line that brought a smile to his coach’s face.

“Oh, Jericho,” Shaka Smart said. “His best basketball is such a beautiful vision, but it’s so far in front of him. I’m telling you, he’s like a fraction of what he can be at some point. Unfortunately, it’s not tomorrow. It’s a ways down the road. I think with him it’s about continuing to gain a comfort level and understand if he makes a mistake to move on to the next thing. He’s very hard on himself. He gets mad at times.”

He might get mad, but he doesn’t talk much about it publicly. No problem there as long as his play continues to speak.

“I’m not completely satisfied,” he said. “We have more games, so it’s a start.”

The soft-spoken Sims is finding his way in the college game. Good thing for him, he won’t have to worry about holding his own when it comes to jawing at opponents because Bamba said he has to practice against the two best trash talkers in the country, referring to himself and Dylan Osetkowski.

When the Cristo Rey Jesuit grad chose Texas over his hometown Minnesota Golden Gophers — his dad played there with NBA All-Star Klay Thompson’s dad, Mychal— it was thought to be a nice signing by Smart, especially since we didn’t know if Texas would beat out Duke for Bamba.

With Bamba aboard, Sims knew he would be coming off the bench. He has the potential to be a really good low-post player on this level and showed it down the stretch Saturday, with a couple of nice inside buckets to keep the Bulldogs at bay. He played so well that Smart is entertaining playing him with Bamba and Osetkowski — a point forward who facilitates this offense — which might be a nice look given this team’s struggles from the perimeter.

That’s not a problem for Sims.

“He can guard wherever he wants to guard,” Smart said. “He’s scratching the tip of the iceberg. This guy athletically is as gifted with his quickness and his explosiveness as anyone I’ve ever been around. You don’t see it all yet because he’s not fully comfortable yet. When he gets that way, he’ll grab a lot more of balls. A lot of the plays around the basket, he will put away as opposed to being hesitant.”

Sims has already displayed flashes of explosiveness with a pair of nasty dunks in the first part of the season, one in the season opener in Australia and the other on an alley-oop feed from Jacob Young against Michigan.

“I’m always telling him to watch for the alley-oop,” Young said. “He’s really growing as a player. He doesn’t talk much but I’m making him say 10 words a day. He’s quiet off the court and low-key, but he’s getting better. We were able to get home in time to see the Michigan dunk on SportsCenter.”

Sims is a quick leaper who can get to loose balls a lot quicker than the bigs he’s going up against. Texas needs that hustle on the interior. Looking ahead, teams will continue to pound the ball inside against Bamba. In most cases, you can expect it to come flying out of there with a rejection slip attached, but there will be times when the whistles will add up to foul trouble. That’s when Texas’ quietest player will get his chance. Plus, the minutes will increase if Shaka decides to go with that big lineup.

Sims has the look of a player who will get better as the season progresses. He’ll be ready when Shaka points his direction.

Trust me on that. Don’t bother asking him.

Golden: Mo Bamba should embrace the role of cleaning up the garbage for Texas basketball

Bohls: Reviewing my preseason Texas predictions — Close on quarterbacks, not on record